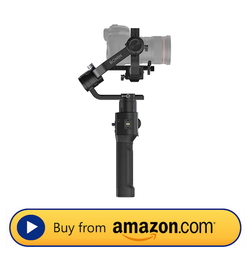 What We Love. The DJI Ronin-S is an undeniable beauty, with a nice matte black finish and a sleek, sturdy design that will make anyone look like a legit, if indie, filmmaker. But then again, anyone using this gimbal will definitely feel like one because while it's fairly easy to use and operate (at least once you've gone out a couple of times to test it), it delivers the kind of functionality that pro videographers use--from the different mounts to accommodate different DSLRs and mirrorless cameras up to 3.6 kg (that's almost 8 lbs) to its stabilizing capabilities. DJI has basically taken the complexities of a dual handle gimbal into a one-person operated rigging so that you can film your videos with a considerably more professional quality without having to lug around all that gear. And it's all powered with a battery that seems to last forever, even you've accidentally left the whole thing on for a couple of hours.
What We'd Change. While the new firmware as improved compatibility, we'd like to see DJI be more aggressive with updating its apps for more camera systems. (During our testing, we had to make use of the infrared cable for the A7R III, which is less reliable.) Also, even though it's made to be portable--and compared to the Ronin 2, it is--it's still quite heavy and not meant for casual use, like if you want to use it to shoot your travel videos for your friends and family to look at.
Pick This Up If... you're an experience or pro shooter who is used to lugging around heavy gear and is looking to improve your videography or filmmaking skills. Unfortunately, despite its ease of use and relative portability, this isn't gear meant for the regular consumers. And DJI isn't touting it as such. If you're a casual or beginner shooter, you'll want to stick to mobile gimbals like the Osmo. 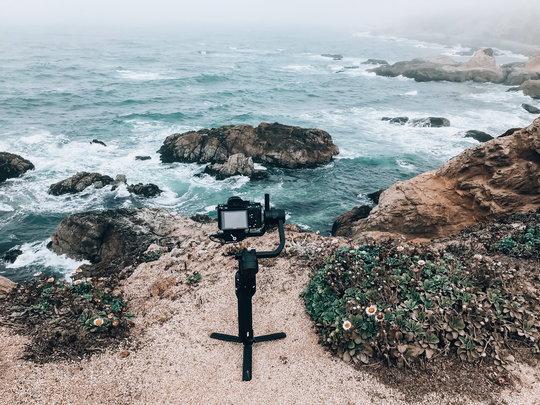 With the gimbal's joystick, you can switch from panning to changing directions and angles seamlessly.
The trigger button in the front, which you press twice to re-center your camera, three times for selfie-mode, and hold down to keep the camera pointing in one direction, is pretty responsive as well, not to mention intuitive to use and easily accessible with your control hand.
The M and record buttons aren't as reactive, however. It might just be our review unit, but we needed to press these buttons a couple of times before we could get them to switch user profiles or stop recording.

Cara Morrison, Sonoma-Cutrer's Chardonnay winemaker, describes how they make Chardonnay. Shot using the DJI Ronin-S.
Stabilization. Thanks to its solid motors, which by the way are part of the reason why the Ronin-S is as heavy as it is, as well as DJI's excellent algorithm, the stabilization on this thing is pretty impressive. We love the smooth and pretty even video clips we shot with this gimbal (although, to be fully transparent, our expertice on this site is more stills-oriented).
That said kind of disappointed that it doesn't always eliminate the camera's bouncing and bobbing when you're walking/running normally while shooting. For that, you'll have to still resort to bending your knees and walking awkwardly, and perhaps using wider angle lenses when you know you'll be doing a lot of walking and dollying.
The DJI Ronin-S' three-axis setup doesn't prevent the bobbing movements when you're walking while shooting.
However, other than that, we've got zero complaints. This compact rig will let you shoot beautifully steady and buttery smooth footage even if you forgo the use of the joystick and rely mostly on your own movements.
Panoramas and Timelapses. Using the app, you can shoot a few different techniques automatically, including panoramas, timelapses, and motion-lapses. The panorama worked pretty well, and the app gives you the flexibility of adjusting different settings including the overlap, delay, and angles. Once you have chosen your settings, all you need to do is click on the app's shutter button and the gimbal will do its thing.
You would still have to do a bit of work, however, once the shots are taken as it won't make your camera stitch together the images for you. Because of this, we didn't take the time to stitch together the images.
We were mostly interested with the timelapse function. While we weren't able to get a great timelapse clip while in motion (like in a moving car), we were able to set this up very early morning to shoot the sunrise colors over a vineyard. Considering that it was very cold that morning and we had this set up on bumpy soil, it turned out pretty well. The cold didn't affect its performance, and despite the unstable surface, the resulting video looks pretty steady.
Timelapse shot using DJI Ronin-S and the Ronin app.
Again, the app itself won't automatically tell your camera to stitch the shots together in one video. You'd have to do this yourself on Photoshop.
PROS & CONS
Pros
Cons
FINAL THOUGHTS
The DJI Ronin-S isn't a nifty little gadget for selfie-takers and home movie makers. You can't just take it out of the box, slap a camera into place, and run off to recreate the long one-takes from The Shining.
The Ronin-S is a hefty piece of kit, rugged and powerful enough to hold and stabilize the large mirrorless and DSLR camera bodies. It's a serious tool for serious videographers and filmmakers... or folks willing to take the time and effort to learn how to balance and operate professional-quality filmmaking gear. If you're looking to start vlogging or documenting family trips, stick to the Osmo Mobile 2 or the new Osmo Pocket.
But if you put in that time and effort, learning to balance, mastering on-the-fly focus-pulls while framing on the go, the Ronin-S will elevate the creative potential of all of your videos. If you want smooth, professional, and steady, this is an easy-to-use, rugged, affordable option. Or, if you're already a working pro or an experienced shooter and you're looking for a compact gimbal for when you're not using a full Cinema-rig, the Ronin-S is a worthy investment.
or
Click HERE to buy from B&H Photo-Video!