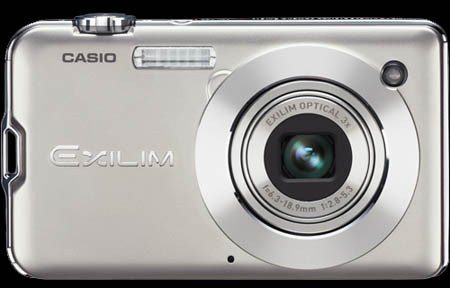 Casio has been a pioneer in digital cameras for over ten years. The new models maintain Casio's long tradition of innovation and creativity. In 1995, Casio introduced the QV-10, the world's first consumer digital camera with an LCD monitor so users could view the images they had just taken. In 2002, the company released the EX-S1, a card-sized camera so thin that it could be carried anywhere. In 2008, Casio launched the highly anticipated EX-F1 and EX-FH20, boasting high-speed burst shooting capabilities to ensure that users would never miss a crucial moment again, not to mention the ability to record high-speed movies that capture motion too fast for the human eye to perceive.

Casio's effective use of fast digital technologies to deliver unprecedented high-speed burst shooting and high-speed image processing of these new models has exceeded all expectations of what digital cameras should be able to accomplish. These stylish cameras are the first bold step in a major transformation of the traditional definition of the photograph, offering users entirely new ways of enjoying still and moving images.

EXILIM models EX- Z400, EX-Z270, and EX-S12
Taking advantage of the high-speed image processing abilities of Casio's state-of-the-art EXILIM Engine 4.0, which is built into these models, the new Dynamic Photo function allows the photographer to cut out the main subject of interest in an image that has just been captured and then combine it with another image to form the background. Users can also cut and paste several rapid-succession images to create a moving subject on a still background. This function makes it easy for users to create composite scenes from an image juxtaposition that exists only in virtual reality, or they can create a composite image that conveys a certain message. Casio technologies like these are creating whole new avenues of enjoyment that go far beyond mere picture-taking, delivering greater creative and viewing pleasure.

Also to be released at this time is the EXILIM EX-S5 - a camera with a compact body based on a new design concept - which makes high-quality photographic functionality simpler to use than ever before.

"Casio is dedicated to creating 'out of the box' features and new technology packed into our digital cameras," said Bill Heuer, Vice President of Sales for Digital Imaging Division at Casio America, Inc. "We continue to be at the forefront of the digital camera market, providing new levels of convenience for the consumer taking photographs and shooting high-quality videos."