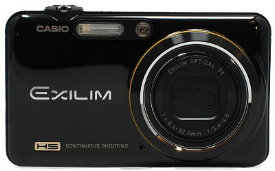 Casio has hit one out of the park with the new Exilim FC-150. This compact wonder has some fantastic and amazing capabilities that I am excited to get into. Lets get some specifics out of the way first. The FC--150 is a 10.1-megapixel camera with a 5x optical zoom lens. Around the back is a 2.7in LCD that is used to frame pictures as well as scroll through and use the various menus and functions.

The EX-FC150 is compact so it totes around quite easily in a pocket or a handbag. The FC-150 is not light, with some weight to it, but that just adds to the well built feel of the camera. Placement of buttons and switches is excellent, nothing is out of reach or in the way. No worries about always inadvertently hitting the wrong button here.

Performance stats from the FC150 are in a word; amazing! But one word is not quite enough so lets throw: "fast" in there to keep amazing company. From power on to taking a picture took 2.7 seconds.Shutter lag is a term that describes the time it takes a camera to take a picture after you fully depress the shutter button. This is measured both from the pre-focus point as well as just mashing down the shutter button and taking a picture. In both these modes the shutter lag was almost immeasurable, in both cases it was less than 1/10 of a second.You do burn a bit of time from shot to shot. In our timing tests we averaged 1.6 seconds between shots, and adding the flash to this equation slowed the camera down considerably with a time of 7.9 seconds between frames. At Normal Speed CS (continuous shooting) we had 1.1 seconds between shots. But for those of you seeking a camera for action shooting, do not lose heart, just switch over to High Speed mode or one of several BestShot shooting options and your ready for action! Setting the camera to 40, that's right 40 frames per second, we got speeds of 44fps and get this, your shooting at 9-megapixles of resolution for beautiful, crisp images.
All of our tests were completed using a SanDisk Extreme III, 1GB SD memory card, Auto shooting mode, Auto ISO, flash off and all other settings at the factory defaults. All times may vary depending on lighting, camera settings, media, etc.

Image quality. This will be short due to the fact that image quality from this camera is fantastic. I am here to promulgate to you that things like barrel distortion or aberrations are minimal at best. The images are clear, they are sharp and they show great detail.

Indoor tests continued to produce great results. Our M&M man shots look good right up to the ISO 800 setting and even there noise and detail loss were minimal. The ISO 1600 setting is noisy but you can develop a nice print size of 4x6 or 5x7 from it.The flash on the FC150 is powerful but not overbearing. A nice feature is that you can adjust the flash output in the menu settings. The picture of the hamster on the samples page was shot with flash in a low-light room and fairly close at about one to two feet. As you can see the image is bright but not blown out at all. Also on the samples page is a portrait of a boy in a sweater. I included this one because it was shot with a flash from around seven feet away and shows the strength of this built-in unit.

Shooting outdoors yielded clean, sharp and vibrant images. I give you the brick house as exhibit A and the picture of the girl as additional evidence to support this claim. The LCD was easy to see in order to frame my shots even on the one sunny day we had.

I want to take this paragraph to mention the different modes that Casio has implemented in the BestShot Scenes. The "CS" set. This includes: Expression CS, Baby CS, Child CS, Pet CS and Sport CS. All these modes basically use the same formula, they shoot a set amount of images in a group. The object is that in the midst of an action scene one or more of the images in the group will be the one you were hoping for. Another innovation is the Lag Correction which starts pre-recording images when the shutter button is half-pressed, ending when the shutter button is completely pressed down. The images that were pre-recorded can be then saved as a group or individually. New with the EX-FC150 is High-Speed Lighting. This mode shoots three images at different exposures and layers them together to get an optimal final image; much like an HDR image is created. We have two examples of this the first is of the girl in the red hat and a side by side comparison with the two bulldozer images. The more vibrant of the two is the BS High-Speed Lighting mode. I really liked this setting and could see it being used quite often. You can also set the camera to shoot high speed bursts. Settings can be adjusted from 1 to 40 frames per second, and you can set the number of images captured from 5 to 30.

Recording movies is almost as varied as image captures. In normal recording you can choose from Standard Definition (640x480) or High Definition (1280x720). In addition, you can shoot movies in High Speed. Here are three pre-set selections in the BS modes (child, pet and sport) to choose or you can select your own settings by going to Menu > Quality. Check out The pogo stick video for a sample of a burst mode. This was shot at 40fps, I then sized the images to 800x600, and created an animation at 30fps on my PC.

Powering the EX-FC150 is a 3.7V, 720mAh rechargeable Li-Ion battery. During our tests I was able to capture 300 + images plus several movies (a lot of the images were testing the different CS modes) before the battery icon started flashing red. We do not have a recommendation from Casio as to how long the battery should last, but suffice it to say that I feel the battery lasted as long as could be expected. The charger is external for this camera so a second battery could always be charging while the first is being used.

Bottom Line - The Casio Exilim EX-FC150 is compact, easy to keep with you but it has some weight to it that gives it a good quality feel. This camera takes excellent photos in any situation, and the CS burst modes will be handy for sports events or any time action is afoot. The camera has more buttons than most point-and-shoots, but that shouldn't scare off any novice shutter-bugs, because its easy to use and grow into.