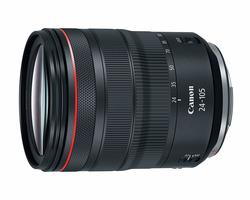 What We Love. The Canon RF 24-105mm F/4 L IS USM may just be the most impressive kit lens we've ever had the pleasure of using. It's easy to love, not only because it looks like a badass mounted on the EOS R system, but also because it boasts a performance you wouldn't expect from a "kit lens." But as one of the four lenses that Canon launched to complement its full-frame mirrorless line, being impressive does kind of come with the territory. At a little over $1K, this versatile piece of glass offers its users a wide focal length range so you're less likely to carry an extra lens or switch lenses, a constant aperture of F/4 so you can go wide even at the longest focal length, image stabilization for steady shots even at slower apertures, an extra control ring to use as an aperture or shutter speed ring, and a rugged construction as well as weather sealing so you can gallivant in the wilderness with it without worry about damaging it. And that's just to start.
What We'd Change. This kit lens is already amazing for what it is. It certainly exceeds our expectations so it's pretty hard to complain. We guess there's that itty-bittiest sign of barrel distortion or rounding in the center, very minimal chromatic aberration, and noticeable softening around the edges at its widest apertures. But you can easily fix those in post in no time at all. The one thing people might find hard to swallow is that price. If you're an enthusiast--and most folks who would want this lens would be enthusiasts as well as casual shooters who would prefer to stick to one lens--a $1099 kit lens might be a tad steep. But then again, if you're serious about taking your photos to the next level, you'll need to properly invest.
Pick This Up If... you need a versatile and rugged lens that captures great images. Whether you're a novice, an enthusiast, or a more experienced shooter, the Canon RF 24-105mm F/4 L IS USM is your new best friend if you're looking to travel light or take a break from having to constantly think about which lens to use for what situation.
Click HERE to buy from B&H Photo-Video!