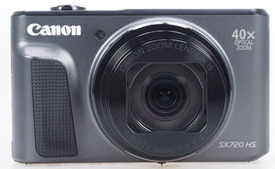 The PowerShot SX720 HS offers a lot of manual control in a compact chassis. In addition to aperture- and shutter-priority modes, you can select full manual mode on the 11-position mode dial. The 9-point autofocus and 40x zoom lens usually combine to create high-quality images, and the lightning-quick burst mode can freeze fleeting action.

The power of the 40x zoom will get you close to far-off subjects (35mm equivalent: 24-960mm). And the ability to crank up the ISO as high as 3200 will help you get sharp shots in low light.

The camera is pretty quick, able to start up and capture its first image in roughly 2 seconds. And, if outfitted with a Class 10 SDHC card, the 7.2fps burst shooting is able to capture numerous 20M images without a hiccup. In one go, I recorded almost 90 images without experiencing any slowing. One thing the SX720 HS does not offer, however, is a high-speed burst mode for capturing shots at 30 or 60fps at lower resolutions. However, given the choice between these high-speed modes and a quick full-resolution burst mode; I would always choose the latter.

The camera also can perform burst shooting with the flash, though it is somewhat slow to recharge. In my testing, the flash usually took about 2.1 seconds in between shots to recharge. The flash springs up from the top of the camera when you press its release button on the side panel. The range is good for its small size, but not ideal. The specifications say its range at wide angle is just over 13 feet, but the usable range was closer to 10 feet in my testing. That's enough for close-up portraits, but you can't expect a group shot in a medium-sized room to have an attractively lit background.

Macro mode works great. You set the auto focus to macro using the dedicated position on the four-way control. Macro AF can focus as closely as 1 cm, which is great for capturing small details.

The 9-point auto focus usually performs very well. The face AF feature in particular is handy for portraits. The tracking AF function generally kept my moving subjects in its sights. However, the tracking AF had difficulty keeping a skateboarder in sharp focus when he moved out of full sunlight and into a shadowy area; resulting in some blurry shots. Also, at extreme magnifications nearing the lens's 40x maximum, the AF sometimes had difficulty locking on and getting me a sharp shot. Ambient indoor light also proved difficult for the autofocus at times.

You can use manual focus, but it's not ideal. The focus peak assist feature highlights edges in the red, blue or yellow when they come into focus. But I found the highlighting difficult to see, even in the manual focus preview at 2x or 4x. You use the dial to adjust the focus, but the focus range changes from cm to meters on-screen, and it can be confusing and require many turns of the dial. The camera refines the focus when you press the shutter button halfway.

There is a seek assist feature that has a dedicated button on the side panel, next to the flash button. Pressing the button adds a white box to the screen. Turning the zoom ring rightward, the frame gets smaller, indicating what will be at full frame after the lens zooms in. When you let go of the button, the lens zooms in. If you lose track of your subject, you can press the button to zoom the lens back out. I didn't think this feature very helpful. It adds an extra step to framing a shot, and it zooms the lens further out than you need to in order to reframe, if you set it up at wide angle. To me, it's no better than simply zooming out a bit and reframing.

The image quality is good overall. Exposures were accurate, colors looked natural, and details were sharp. Having 40x power in a small-barrel zoom lens does come with some trade offs, however. Shots taken at full telephoto are not as sharp as those taken at wide angle or at roughly 20x. However, the image stabilization does work quite well, allowing you to shoot handheld at these high magnifications and still get usable shots. Also, shots taken near the maximum zoom of 40x are noticeably less sharp than wide angle or mid telephoto shots.

Low light performance is good, but not fantastic. You can see some digital noise softening details even at ISO 800 in the studio shots on our Samples Page, though it's more obvious at ISO 1600 and 3200. But the graininess is more pronounced in handheld shots taken in moderate ambient light. With a maximum aperture of f/3.3 at wide angle, the camera is likely to resort to high ISO settings in moderate light, such as daytime ambient light indoors. You can use the flash, of course, though at ISO 400 with flash I thought the shot was just about as noisy as the shot taken without flash at ISO 1600.

The 922k-dot LCD is bright, colors are vivid, and details look sharp. Skimming through your photos in playback mode is made easy by the dial. When you turn it quickly, the preview image gets a little smaller to allow three previews to fit on screen. These smaller previews, however, are not as sharp as the full-screen images.

The dial also eases menu navigation, and you're able to turn it to get quickly through a list of settings. Playback offers a few options for assembling albums automatically or using Smart Shuffle to show random images that are supposed to be similar or related. You can combine short movie clips, playback movie digests interspersed with still images from Hybrid Auto mode, and add background music, if you like.

But the best feature to me is still the My Colors filters, which you can add to images in playback, just as you can use one while shooting. These are straightforward, nothing too flashy, but their strength is in their simplicity and subtlety.

You can record video at full HD (1920x1080 at 30fps). In ample lighting, video quality is high. However, in low light the camera's video footage tends to get a little noisy, suffering from dancing pixels of digital artifacts.

Although the specifications rate the Li-ion battery at just 250 shots, or 355 frames in Eco mode, I recorded substantially more in my testing. At default settings (Eco mode off), I recorded 670 stills and four short videos on a single charge. This did include images captured using the burst feature of the camera.

Bottom line - This compact PowerShot offers fast burst shooting, manual controls, and attractive filters, plus buttons and a dial that ease operation. In addition to a powerful 40x zoom, the lens can focus very closely in macro. The autofocus is usually effective, though has some trouble at high magnifications. Image quality is high overall, though low-light performance is not the best.