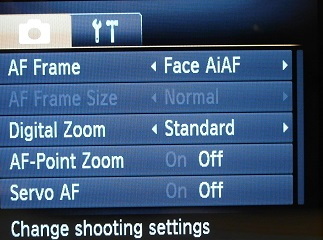 Please excuse the poor quality of these screen captures. The PowerShot SX610 HS kit does not include an AV output cable, therefore we had to photograph the LCD.

With the PowerShot SX610 HS's mode toggle switch set to Auto, you'll be able to select from a variety of shooting modes.
The SX610 has no mode dial. Instead, press the Func/Set button on the back of the camera to open a popup menu along the left side of the screen. Your shooting mode options in Auto mode are:
As you highlight each mode in the list, an explanation will appear in the middle of the screen.
While on the shooting screen, you'll see some data about the settings along the top. In Program mode for example, you'll see a battery indicator, image size icon, remaining space on the memory card, video setting, and remaining space for video on the memory card. Along the right side you'll see a letter or icon representing the current shooting mode. Below it is the flash mode and the ISO setting.
To remove all data from the screen, press the Disp button on the back of the camera. Press it again to return the data to the screen.
By sliding the mode toggle switch on the back of the camera to the upward position, you'll enter the Hybrid Auto mode, where a short video clip is created at the same time you're shooting still images. Hybrid Auto mode is indicated by AUTO in the upper right corner of the screen with a camera/filmstrip icon below it. When you press Disp in this mode, the Hybrid Auto icon remains on the screen along with the image stabilization icon.
Slide the mode toggle switch to the middle position to enter Creative Shot mode, where the PowerShot SX610 HS will record six photos each time you press the shutter button. The camera will apply a different special effect or aspect ratio or method of cropping to each of the six photos in a random manner. Creative Shot mode is indicated by an icon of three photo frames atop each other in the upper right corner.
You can limit the camera to picking from a particular group of special effects by pressing the Disp button, which causes some icons to appear along the bottom of the screen. Use the four-way button to select the group of special effects from which you want the camera to pick when creating the group of six photos. The options are:
As you advanced the zoom ring, you'll see a zoom bar graph indicated along the top of the screen, allowing you to determine how far you've advanced in the Canon SX610's zoom range. The white line about two-thirds of the way along the bar indicates the split between optical zoom and digital zoom. When you enter the digital zoom range, the bar will turn yellow. The zoom advance will pause at the spot between the optical and digital zoom, which is a good feature to help prevent you from going into digital zoom.
Because the PowerShot SX610's four-way button is so uncomfortable to use, it would've been nice if Canon had given this model a touch screen LCD to make it easier to change camera settings without the four-way button.
You'll make most of the changes to the camera's settings while shooting using a popup menu. Press the Func/Set button to open the popup menu along the left side of the LCD screen. Then use the four-way button to pick the settings you want to use.
The shooting mode you've selected will determine which items appear in the popup menu. When using Program mode the options are:
While the primary special effects for the PowerShot SX610 are located under the mode settings, you will be able to change the colors and tints of your photos through the My Colors portion of the popup menu. The options are:
The four-way button also gives you shortcuts to a few commonly used camera settings, which include:
The bottom of the four-way button is the Disp button, which changes the data on the screen, as discussed earlier.
To start recording a movie in Program mode, press the movie recording button with the red dot on the back of the camera. As the movie is recording you'll see the time elapsed along the top of the screen and a red Rec message along the right side. Press the red button a second time to stop the recording.
To use the Canon PowerShot SX610 HS primary camera control menus, press the Menu button on the back of the camera while in a shooting mode. The shooting menu is indicated by a camera icon tab in the upper left corner of the menu screen. Some of the options in this menu may be grayed out, depending on some of the other settings you've chosen, as well as the currently selected shooting mode. The shooting menu options in Program mode are: