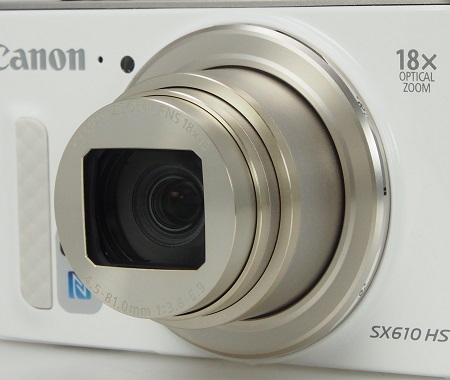 Even though the PowerShot SX610 HS has more than 20-megapixels of resolution, don't expect this model to create really sharp and bright photos that will allow for large prints. The SX610 HS has a 1/2.3-inch CMOS image sensor, which is the smallest physical size for an image sensor that you'll find in the digital camera market. Certainly the image sensor isn't the only component of a camera that plays a role in determining image quality, but it plays a big role, and larger image sensors nearly always outperform smaller image sensors.
Canon gave the PowerShot SX610 HS the DIGIC 4+ image processor, which is a couple of generations behind the latest Canon image processors, and this older processor technology shows up in the SX610's problems with slow performance in burst mode and with flash photography.
For such a thin camera, the 18x optical zoom lens (25 - 450 mm equivalent) is a very nice feature to have. It's not common to find such a powerful optical zoom measurement in a camera that just measures over an inch in thickness (1.05 inches). You can move through the full zoom range in less than 2 seconds.
Canon gave the SX610 its High Sensitivity (HS) system and Intelligent Image Stabilization (IS) to improve image quality in low light situations, systems that often are found in more expensive Canon models.
The zoom lens Canon included with this model isn't particularly fast at f/3.8 at the widest focal length setting and f/6.9 at the maximum telephoto setting. The autofocus range for the PowerShot SX610 is:

As you're holding and using the camera, the toggle switch for the popup flash unit is on the left side of the camera. It makes a loud clicking noise when you open the flash, so don't expect to be too discreet when choosing to use the flash.

For a camera in its price range, the Canon PowerShot SX610 HS has an impressive LCD screen. It measures 3.0 inches diagonally with 922,000 pixels of resolution. It has no touch screen capabilities, and it's not articulated. Because the SX610 has no viewfinder, the sharp LCD screen is an important feature, as it's the only way to frame images.
When using the PowerShot SX610 HS outdoors in sunlight, glare on the screen wasn't a significant problem. But, you can adjust the brightness level of the LCD to any of five settings to help you see the screen better.

.
Along the top of the back panel is a thumbpad, allowing you to hold the camera in a pinching manner. To the right is the mode toggle switch, which gives you three options:
Below this switch is the button to open Playback mode on the left and the movie recording button to start and stop video recording on the right.
The four-way button allows you to move through the camera's menus. And each portion of the four-way button controls a different aspect of the camera.
Use the Func/Set button in the middle of the four-way button to open a popup menu while you're in a shooting mode or to make a menu selection, just like an OK button.
At the bottom of the set of buttons is the Mobile Device Connection button on the left and the Menu button on the right.


As you're using the PowerShot SX610 HS, the right side of the camera has a compartment containing the USB (top) and HDMI (bottom) ports. The ports are behind a hard plastic door that's held in place with a plastic flexible hinge. The door clicks in place when closed.


To open the PowerShot SX610's battery and memory card compartment on the bottom of the camera, slide the compartment door open. The door is attached to a metal spring hinge, which has a sturdy build and feel. The SX610 makes use of SD memory cards.
The separate battery charger included with this model is a nice feature, as you can purchase a second battery and charge it separately while using the first battery. The camera's very thin battery doesn't add much weight to the PowerShot SX610 HS, which weighs less than 7 ounces with a battery and SD card installed. Canon estimates the camera's battery life at 270 shots per charge, but my tests show that 225-250 shots is a more realistic number.