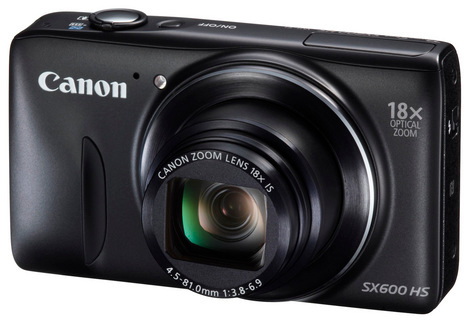 In early January of 2014, Canon announced the PowerShot SX600 HS, in preparation for CES 2014. It features an 18x optical zoom lens (25-450mm equivalent), 16-megapixel High Sensitivity (HS) CMOS image sensor, and Canon's DIGIC 4+ image processor. What does that mean for you? Instant access to far away subjects, even in lower lighting conditions.
There's also built-in Wi-Fi and Near Field Communication (NFC) technologies to consider. Simply press the Mobile Device Connect Button to pair your SX600 HS with a smartphone or tablet running the iOS or Android Canon Camera Window app. From there, you can connect to a PC, upload your images and videos to the internet, back up files on the Canon Image Sync Cloud, and much, much more.
New to most of the 2014 Canon models is Creative Shot Mode. What is it? Well, there are 46 different Filter Effects (divided into four different categories) to stylize your shots. But in Creative Shot Mode, the SX600 HS automatically chooses from five of the filters to render out five alternate versions of your image, while keeping the original.
Finally, Hybrid AUTO Mode "allows you to record up to four seconds of video every time you shoot a still image, and then automatically join the clips and pictures into a video that captures the essence of a vacation, and important event, or anytime you are shooting many shots in a day." It's basically a Highlight Reel for your day or event, which is really cool... except for the fact that Hybrid AUTO Mode is limited to 720p HD Video rather than 1080p.

The Canon PowerShot SX600 HS comes in Red, White, or Black, with a suggested retail price of $249.99. See our best price box at the top right of this page for the most current online pricing.