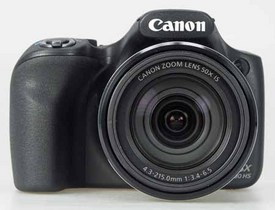 The Canon Powershot SX530 HS takes 16-megapixel images and offers a whole lot of optical zoom power - 50x to be exact. The lens barrel is nearly 2.5 inches wide. And, when the lens is extended to full telephoto, it projects almost 4.5 inches from the camera's front panel, for a total camera depth of nearly 6 inches.

With that much magnification built into the lens, it seems almost silly that you can add digital zoom on top of that. But you can. Also, it's easy to lose your subject in the forest at full telephoto. Thankfully, there's a frame assist button on the lens barrel that temporarily zooms out partway to show you a larger area, so you can find your target and reframe the shot.

Of course, 50x zoom power would be virtually useless without effective image stabilization (at least when handholding the camera). On that front, this camera's intelligent image stabilization excels, automatically choosing the right IS setting so you don't have to (such as turning IS off when you mount the camera on a tripod). I was impressed that I could take sharp shots while at full telephoto (35mm equivalent of 1200mm). Even better, I was surprised that when I mounted the camera on a tripod, my shots at full telephoto looked no sharper than the ones taken while handheld (more on that later).

The camera offers a good assortment of creative treatments to adjust the look of your images. On the easy side, there is the Creative Shot mode. You select this on the mode dial and the camera takes three shots, and then spits out six images with various filter effects. The style depends on what setting you've chosen in the menus. In addition, there is the My Colors effects that you apply in the PASM modes. These are well-suited to photographers who understand how they want to tweak color to fit their aesthetic. Then, of course, there are scene modes, but these are few in number (just six to choose from), but adequate considering the other available effects.

The trouble with this segmenting of photo filters and scene modes is that you must remember which is which. There is a position on the mode dial for Creative Filters - but some of these filters would be considered a scene mode on other cameras.

Some of these setting selections would be easier to make if the dial atop the camera was more helpful. This dial sits behind the shutter button, between it and the mode dial. It falls conveniently under your index finger, and is easy to operate one-handed because the comfortable handgrip helps you keep a firm hold on the camera. However, I found the dial to be of little use on many of the menus. For example, after turning the mode dial to the scene mode or Creative Filter selection, this dial does not allow you to quickly change the preset. Instead, you have to press the function/set button and use the four-way control buttons to change the setting. Also, when launching the full shooting menu, rather than being able to move quickly up and down through all of the menu items with the dial, turning it merely jumps you back and forth between the tabs. Again, you must repeatedly press up/down on the four-way control.

The camera lacks an external flash shoe, but the built-in flash is quite powerful. It scatters a lot of light and can adequately illuminate a medium-sized room. You simply lift it up, rather than having to find a button to spring it into action. The flash menu offers red-eye correction and there is a slow synchro mode, but no front- and rear-curtain feature.

The autofocus works quite well. The face AiAF helps ease focus duties when taking portraits. And, in addition to single frame and continuous AF, you can use tracking AF to keep tabs on an active subject. Although the AF box moved on screen with my moving subject in test shooting, I can't say that the resulting images were extremely sharp in most cases. When viewed on a large screen for close inspection, my shots tended to suffer from some blurriness. In some cases I felt that this was due to poor judgment of the Auto mode, which tended not to bump up the ISO enough so a faster shutter speed could be used. This also happened when taking a portrait indoors without flash - the camera only increased the ISO to 400, resulting in a slow shutter speed of 1/10 second and a blurry shot.

The camera also offers manual focus, though this implementation, like on most cameras without a viewfinder, feels more like guesswork than precise judgement. You must use the up/down buttons on the four-way control to select your focus distance. This in itself is a challenge. Moving from the tip of your nose to infinity, the camera attempts to speed up the process by accelerating the setting change along a measuring stick as you hold down the button. But, this makes it easy to shoot past your desired target, and you have to backtrack. To help you determine focus, there is a magnified area in the middle of the 461k-dot screen. Still, this doesn't compare to looking through a lens via an optical viewfinder. One big plus here is the camera's ability to focus so close to the lens that you can, in fact, take a picture of the dust residing on the glass. The official spec is 0 cm to infinity, and it's accurate. For macro photography, the manual focus is a welcome feature, though I found the AF a little iffy when shooting up close, unable to lock on the closest point I wanted to be sharply focused.

The LCD is fixed and does not hinge outward or swivel. It also does not offer touchscreen functions, which would be handy given the frustrating lack of convenience offered by the dial. The screen's resolution is typical, at 461k dots, but it does a good job of displaying detail and vibrant colors. The surface is highly reflective, however, which can make it a little difficult to see well in very bright light. Also, though it offers very good coverage from extreme angles, I did come across one situation that was slightly odd: while under florescent light, the on-screen image changed to something akin to a film negative when viewed from an extreme downward angle as I held the camera at chest level or in my lap.

Serious photographers will be disappointed that there is no RAW mode. And, if action photography is one of your interests, you'll likely be frustrated by the pokey 1.7fps burst mode, which did not get high billing, having no dedicated drive mode position on the four-way control to access quickly. There is a high-speed burst mode, but it is oddly hidden away - it's a scene mode rather than a selection in the drive mode menu. This captures 4MP images at a rapid 11.2fps.

When the scene is not challenging, this Powershot delivers good image quality and video quality. However, such ideal situations become challenging more quickly than with some other comparable models. For example, capturing active subjects and shooting in low light can easily outpace this camera's abilities. Although the tracking AF keeps tabs on moving targets, I found the resulting images tended to be a little fuzzy in the details. And, even when shooting at a modest ISO 400, digital noise and artifacts hurt the image quality. Even when mounted on a tripod (see Samples Page shots taken in the studio), the camera produces shots that lack fine, sharp details. Although I was very impressed that at full telephoto I could capture images that were just as sharp as when using a tripod, the shots did not look extremely sharp in the first place. Also, a drop-off in color can be seen not only at higher ISOs, but also at ISO 100 when using the telephoto lens. Notice the difference between the daytime shots taken at wide-angle, mid-telephoto, and full telephoto on the Samples Page in afternoon sunshine. The colors look increasingly washed out as the camera zooms in. Similarly, you'll notice digital noise in the HD video sample.

The camera offers both Wi-Fi and NFC wireless connection. As such, the camera does not bother to include a USB cable. You can put the camera on your wireless network, and use NFC to control it with your smartphone, or just to view and upload photos to your smartphone or tablet. If this is your typical photo viewing experience - a camera LCD or smartphone screen, it's worth considering if the mediocre image quality will bother you. If you don't zoom in much on images and only view them on a small screen, you may not notice low-light artifacts and the lack of razor-sharp detail.

Perhaps the most impressive feature on this camera is the image stabilization (IS). This feature is very reliable, and its intelligent adaptation to different scenes - such as when panning or recording video - is very handy. No need to change the IS mode. The camera does that for you. It also detects when you're using a tripod, and turns IS off.

You can record full HD video, but there are no fancy slow-motion or time-lapse modes. Editing in playback is a simple affair of trimming the beginning and end. You can do a little more with photos - you can apply the My Colors settings in playback, except for the custom setting, which is available in shooting mode only.

Bottom line - This Powershot puts up a lot of zoom power, offers superb image stabilization, and has a solid built-in flash. The assortment of tasteful filters and photo effects is appealing, but the sluggish burst mode makes it a poor choice for action photography. You don't get RAW mode or an external flash shoe, and image quality in low light is mediocre. Deteriorating image quality at higher magnifications further hurts the appeal of the 50x zoom, and the camera's overall versatility.