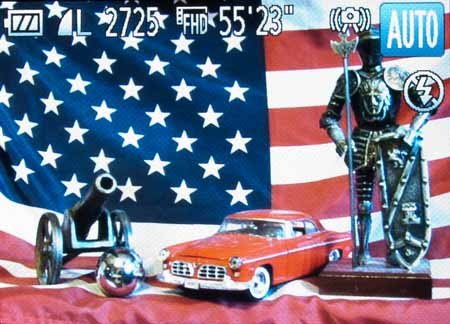 
The default view when shooting in Auto mode shows basic settings and file information along the top of the screen. All of these icons disappear when autofocus is achieved - except for the anti-shake and flash setting icons, which remain.


Pressing downward on the four-way control (display position) removes all camera settings information, including the shooting mode (Program in this case). Only the exposure compensation value remains at the bottom of the screen. The autofocus box in the middle turns green when focus is achieved.

These are the only two display views accessed by the display button.


To change the display any further than the two default views, you must go to the menus. There, you can add a grid to the screen (shown above). The top right icon is for the Super Vivid selection within the Creative Filters menu. Notice also that the flash has now been flipped up and is using the auto setting.


One of the 11 positions on the shooting dial is for Live mode. In this mode you press downward on the four-way control (display position) to pull up an on-screen menu. Here, you adjust these three parameters to customize the look of your images.

The following is a complete list of the shooting modes. However, these do not all reside in one menu. Some have their own position on the mode dial, such as Manual and aperture-priority. Others are scene modes you select after turning the mode dial to the scene mode position. The latter selections are Creative Effect options.

Between the Auto and Scene Mode positions on the mode dial is Creative Shot. Here, I have selected the Retro setting to apply various vintage effects. In this mode, the camera takes three shots and applies effects to give you six variations. In addition to the visual treatment, this mode also produces alternate cropping of the images. In general, I found the effects to be attractive, though I sometimes found the croppings to be off-base. If I had the choice, I would disable the alternate croppings, and just do that myself.

To change the Creative Shot setting, you simply turn the dial, as indicated by the icon at the bottom left of the screen. I wish the dial always performed like this. For example, after turning the mode dial to the next position (scene mode) I wish this style would allow me to quickly change which scene mode the camera was using. But it doesn't. You have to press the function/set button at the middle of the four-way control and toggle up and down using the four-way control to change the scene mode.


To navigate this camera efficiently, you will need to wrap your head around the idea of what constitutes a scene mode versus a creative effect. This camera is not long on so-called scene modes - there are only six to choose from. But you would be forgiven for wondering why high-speed burst is considered a scene mode in this camera (or maybe him just forgiving myself because I had to go to the manual to figure this out). Rather than offering high-speed burst in the drive mode menu (where you simply choose single or continuous), this is hidden away in the scene modes.

The Smart shutter feature worked well in my testing, responding well most of the time to my smile or my winking. The face self timer starts a countdown when a new face enters the frame.

The next position on the mode dial is Creative Filters. Four of the six filters offer an adjustable parameter. Shown here is the fish-eye lens effect, which offers a three-step severity to the simulation. You change the setting using the dial atop the camera.


The My Colors feature allows you to tweak the color in the PASM modes with 10 presets and a custom selection that has six adjustable parameters.

You can apply all of these color treatments in playback mode as well, except for the custom color selection.


There are three autofocus frame modes, including tracking AF. The camera also offers face AiAF, where it prioritizes on focusing on a face in the frame if it can detect it. In my testing, the camera did do a good job of detecting faces and the tracking AF feature did work well, in that it kept a lock on a subject, once selected. However, I would not say that the resulting shots taken in moderate light were extremely sharp. Although the camera appeared to track my subject, the resulting focus was not as sharp as I would've liked.

The camera does offer manual focus. To assist you with this, you can have the area within the focus box magnify in the center of the LCD. However, using the up and down buttons on the four-way control is tedious for adjusting the manual focus. Because of the broad focal distance, the macro and telephoto ranges spread over two on-screen meters, which can be kludgy. In an attempt to help you find focus faster, the adjustment speeds up after a second or so, in case you're trying to move from macro to a far-off object. But this also makes it more difficult to fine-tune the focus. When my subject was in the middle of the focal range, I found myself zipping past my desired focal distance.


There are 18 settings in the shooting menu. Here you do everything from adjust the autofocus frame size to enable blink detection.


The settings menu contains all global settings, such as the brightness of the LCD and Eco mode (to save battery power).


Within the settings menu are the Wi-Fi settings. Here, you can set up and change wireless features for both Wi-Fi and NFC communication with a smartphone. With the CameraWindow app running on an Adroid or iOS smartphone, you can view images from the camera on a smarphone, and trigger the shutter remotely.


After pressing the movie record button, the LCD shows only the time lapse at top and a recording icon.

If you turn the mode dial to the movie record position, you can change the information display the same way you do while shooting still images. Pressing downward on the four-way control will make settings information appear or go away. Once you press the movie record button, any icons vanish and the display is shown as it is here.

The camera records full 1080p HD video at 30fps. There are no slow-motion or fast-motion video record modes.

You can use all the same My Colors settings for video as you can for still images, but not the Creative Filter settings.