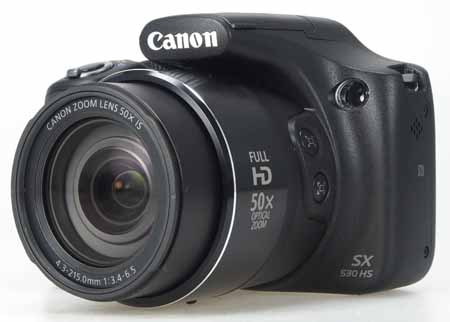 The camera uses a 1/2.3-inch CMOS sensor, capturing 16-megapixel images. It records in JPEG format only, no RAW format options are available. You can also record full 1080p HD video at 30fps.

The big barrel lens offers 50x optical zoom. It's almost comical that on top of this the camera includes digital zoom, given the whopping 50x optical magnification will get you such close-up shots of such far-away subjects. That's the 35mm equivalent of 24mm to 1200mm, offering you a wide angle in addition to an unreal amount of zoom.

You will note in the focusing range specification below that using macro autofocus apparently allows you to focus on a subject that's just about touching the lens. However, in my shots of very close flowers, I did not find that the camera could indeed focus that closely - at least not while focusing on the closest object (it tended to focus on a more distant part of the plant). To counter this you could use the manual focus feature, but you'll have to select your focus distance using the up/down four-way control buttons and a magnified preview in the middle of the LCD. Doing so makes uber-close shots easier. In fact, if you pull the manual focus all the way back, you can take a picture of the dust sitting on the lens.

There are two buttons on the left side of the lens barrel. The function of the top one is called framing assist-seek. When you press this button while zoomed in on a far-off subject, the camera zooms out and shows you in a white box the area you had zoomed in on. With such a powerful zoom, it is easy to lose track of your subject if it is, say, a small bird perched in one of many very similar-looking trees. This is a welcomed and handy feature.

The bottom button is for framing assist-lock. This is designed to reduce camera shake at the telephoto end of zooming magnification, to help you frame your shot better. But I found the help imperceptible. The on-screen view did not look any smoother to me using framing assist-lock than without it. And, in the resulting shots, I thought the stills taken without the feature turned on actually looked slightly sharper, with a little less digital noise.

All that said, the optical image stabilization does a good job of keeping your preview at 50x from being a jittery mess. But, given the amount of image stabilization that must be performed at this magnification, you'd be forgiven for perhaps feeling a little nauseous with the swimming effect it has, in not fully responding to your movements of the camera. The optical image stabilization does such a good job, in fact, that afternoon shots outdoors looked just as sharp handheld at 50x zoom as they did with the camera on a tripod. I'm not saying they were razor-sharp (far from it), but they didn't look any more blurry.

The camera does not have an external flash shoe. However, it's built-in flash does a very good job of lighting up a subject. The company publishes a maximum range at wide angle of 18 feet, and in my testing this was accurate. The flash is powerful enough to scatter ample light across a medium-sized room and produce an attractive shot. There are four flash modes - however, you don't get front- or rear-curtain modes.

To raise the flash, you simply flip it up with your fingers. Assuming you have a menu setting other than "off" selected, the flash is now active.

The display is not the sharpest on the market, but at 461k-dot resolution, it does a fine job of displaying small details and vibrant color. It is quite reflective, however, which can be distracting in bright light. Although it boasts a nearly 100% coverage, I did find one instance where this was slightly limited: while shooting indoors under florescent light, I lost some of the viewing angle while looking down at the display, but not from the sides or from below. So, when holding the camera below eye level it was a little more difficult to frame my shot because when the camera was held at an extreme angle, the colors faded to an almost film negative appearance. This oddity did not occur in other lighting conditions.

It is necessary to frame such shots at an oblique angle to the LCD because it is fixed - the screen does not swivel or hinge outward from the camera body.

The controls on the back of the camera are pretty standard. Note that at top right is the video record button, which falls conveniently under the thumb, as does the exposure compensation/delete button below it. Further down the panel, the playback button sits just above the four-way control. Note the functions of the positions on the four-way control. You get quick access to the ISO menu/Wi-Fi menu, flash setting, display view, and to use manual focus/macro. Some other commonly accessed settings, such as burst mode, must be selected in the menu.
Below the four-way control you will find the mobile device connection button (for connecting to a smartphone) and the menu button.


The top of the camera offers a mode button with a generous 11 selection positions. This allows you to quickly change your shooting mode without having to visit the menus.

In front of the mode dial is a dial you operate with your right index finger. This front dial, however, is not as helpful as it may appear. It almost feels like an afterthought. I found it downright annoying when navigating menus - rather than whizzing me through the long list of possible selections, turning the dial toggles between the two or three on-screen tabs. After pressing the function/set button, which launches a vertical on-screen column of settings, I was hoping the front dial would move me quickly through the possibilities. But, again, I had to go to the four-way buttons to slog through my options. Where it does do its job well is after you press the exposure compensation button - you use the dial to quickly adjust the EV setting on the on-screen meter.

The zoom ring surrounds the shutter button atop the generous hand grip - the contour allows you to comfortably hold the camera while resting your index finger atop the shutter button. For such a powerful zoom lens, having to use a small zoom ring to control the lens motor is not ideal (I would prefer a ring around the lens barrel). But, I did find the zoom motor to be very responsive, enabling both subtle changes in magnification as well as a brisk zoom from wide-angle to full telephoto (just over two seconds).


There are just two ports on the side of the camera, which sit behind a rubberized flap around the corner from the back panel controls. There is an AV/USB port and a mini-HDMI port. No cables are included.


The Li-ion battery is recharged by using the external charger, which plugs directly into an outlet without a cable. The battery compartment sits next to the SD Card slot on the underside of the camera, behind a small door. This door is next to the tripod mount, and it's unlikely you'll be able to open it without removing the camera from a tripod.

The battery does not promise to last on a marathon shoot. But it did do significantly better than its specification in my testing, capturing a total of 314 still images and a dozen videos ranging from 5 seconds to 1 minute and 40 seconds.