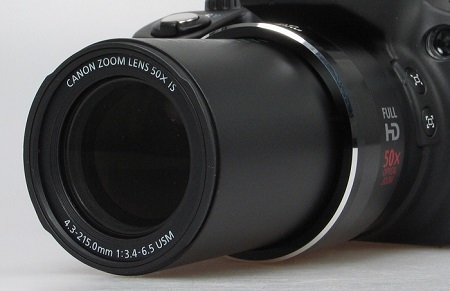 Although the Canon PowerShot SX50 HS has quite a few high-level features, the easiest one to notice is the 50x optical zoom lens (24mm to 1200mm equivalent). This is one of the largest zoom lenses currently on the market in a fixed lens camera, and it makes the SX50 a really big camera, easily rivaling a DSLR camera in its size. This camera measures 4-plus inches in depth with the camera powered down, and the zoom lens extends another 2.5 inches at full telephoto.
Canon included a very fast zoom motor with this model, as it flies through the full 50x zoom range in just under 2 seconds. However, this quick moving zoom makes it difficult to stop at a particular telephoto measurement, which may frustrate some photographers. It also doesn't have enough of a pause when it reaches the 50x measurement, making it easy to extend into the less desirable digital zoom range without knowing it; which can be disabled, thankfully. When shooting movies, the zoom moves a little slower, requiring 5 seconds to move through the full range, which is actually almost better.

To help keep things stable when shooting hand held, Canon has integrated their proven Optical Image Stabilization system into the SX50's lens. They have also included their Intelligent IS system, which automatically chooses from six different modes to help you create clear photos in a variety of shooting situations (Still mode - Normal, Panning, Macro (Hybrid) and Tripod IS; Movie - Dynamic, Powered, Macro and Tripod IS).
The PowerShot SX50 HS has a through the lens autofocus system, as well as a limited manual focus system. With the manual focus, you'll see a portion of the scene magnified on the LCD screen, and you then can use the four-way button to fine tune the sharpness of the focus.
Autofocus Range:

Canon included a 1/2.3-inch backlit CMOS image sensor with the PowerShot SX50. For a camera with several other advanced features, it's a little disappointing that Canon didn't choose to install a bit of a larger image sensor in this model.

Canon placed labels on the top of the lens, which allows you to see a representation of the telephoto measurement as you zoom in and out. The optical zoom magnification number doesn't appear on the LCD or in the viewfinder as you're using the zoom motor, so the label on the physical lens may be helpful for you.

The PowerShot SX50's lens cap fits securely on the front of the lens.
The SX50's popup flash unit is centered directly over the lens. You do have to manually lift the flash when you want to use it. You also cannot set the flash modes until the popup flash is lifted. The flash can operate in Auto, Flash On, Slow Synchro, and Flash Off modes.
The flash range with this PowerShot model is really good at 1.6 to 18 feet in wide-angle mode and 4.6 to 9.8 feet in telephoto mode.

You also have the option of adding an external flash unit through the hot shoe on the top of the camera. The hot shoe is centered over the lens on the top panel of the camera.
You can see the flash control button on the left side of this photo. Pressing this button with the popup flash raised or with an external flash attached will bring a popup menu on the screen with the flash options.
Most of the camera's primary control dials and buttons are on the right side of the top panel. You can see the large right-hand grip that Canon included with the PowerShot SX50, making it comfortable to hold and use this large fixed lens camera.
The shutter button is at the edge of the right-hand grip, which is the perfect location. Surrounding the shutter button is the zoom ring, which again is in the ideal location to easily use it. Both the button and ring are a good size to use comfortably.
The power button is marked with an On/Off label. To its right is the mode dial, which contains 12 different options. The mode dial turns stiffly, and it isn't going to shift out of position if you inadvertently bump it.

The Canon PowerShot SX50 HS includes an electronic viewfinder (EVF), which is a handy feature. (It'd be nice if more cameras contained one.) Unfortunately, Canon skimped a bit here and didn't include a sensor that automatically switches the live view between the viewfinder and the LCD screen as you raise the camera to your eye. You have to manually switch between the two using the Disp button on the back of the camera. And you may have to press the Disp button twice to cycle through the different viewing modes before switching from the LCD to the EVF. This is an unnecessary hassle that Canon could have easily fixed by making the process automatic with a sensor, as many camera makers do.
However, you can customize what's shown on the LCD and EVF displays through the camera's Set Up menu, which is a really nice feature.
The resolution of the EVF is only 202,000 pixels, which is below average among advanced fixed lens cameras that include an EVF. There's a diopter adjustment wheel just to the left of the viewfinder that makes the EVF's image sharper, but it would've been nice if Canon had given the viewfinder display more resolution.
To the left of the viewfinder on the back panel of the camera is a customizable "S" button, which allows you to assign a function of the camera to the button for a shortcut. To the right of the viewfinder is the Playback button, marked with a blue triangle.

The LCD screen included with the PowerShot SX50 is a bit smaller than you might expect, measuring 2.8 inches diagonally. Nearly all new cameras have at least a 3.0-inch LCD. The screen is pretty sharp, though, offering 461,000 pixels of resolution.
The SX50's LCD is bright and easy to see, even in direct sunlight. Canon did include five brightness level settings with this LCD.

Canon included an articulated LCD with this camera, which is a great feature. You can tilt the screen to almost any angle, making it easy to shoot self-portraits or odd-angle images.
The right side of the back panel has a set of pretty familiar buttons to those who have used advanced PowerShot cameras in the past.
At the top is the dedicated movie button, marked with a red dot, through which you start and stop movies; no matter what exposure mode you're in. To the left of the movie button is a depressed area designed as a thumb grip.
Just below that is the Face Select button, which toggles that feature on and off.
The four-way button is surrounded by a control ring that spins, allowing you to move through menu selections or stored images more quickly. This ring also changes certain exposure values, depending on which exposure mode you are using. Although these rings are typically nice to have, Canon for some reason made this ring too flat to the camera body, making it a little difficult to use with your thumb.
The four-way button itself is also a little tough to use, because it's too tight to the control ring. The four way button includes an EV button at the top, a self-timer button on the right, an ISO button on the bottom, and a focus button on the left.
In the middle of the four-way button is the Func/Set button, which allows you to make selections on the menus. You also can call up the popup menu using this button. The Func/Set button is raised up a bit, which makes it easier to use. It's too bad the four-way button and control ring aren't designed in a similar manner.
Along the bottom of the right side are two final buttons. The Disp button changes the information that's shown on the LCD and the EVF, and it also switches the view between the LCD and the EVF. You have to press this button four times to toggle through all of the different options between the LCD and EVF, which is a bit of a hassle.
The Menu button opens all of the camera's Shooting and Set Up menus.

Behind a panel on the right side of the camera, Canon included three ports. There's remote terminal along the top, the USB port in the middle, and the HDMI port on the bottom. Not many cameras offer a remote terminal, so it's nice to have one here.
However, Canon did not include either a USB cable or an HDMI cable with this camera, which is extremely frustrating for a camera in the $400 to $500 price range.

Canon chose to include a pretty thick battery with the PowerShot SX50, which is necessary with such a large zoom lens. Besides, this camera is already pretty heavy at 19.4 ounces without the battery, so a thick battery doesn't add much weight to this model.
Canon estimates you can shoot approximately 315 photos when using the LCD to frame images and 335 photos when using the EVF. My tests showed these estimates to be a bit high, but the overall battery life for the SX50 is average considering the large zoom lens.
You can charge the SX50's battery in a separate charger, which is a nice feature for those who choose to purchase a second battery, as you can charge one battery while shooting with the other. The PowerShot SX50 HS works with SD family memory cards, and it can connect directly to PictBridge compatible printers.
The door for the battery and memory card compartment locks firmly into place and contains a sturdy hinge.