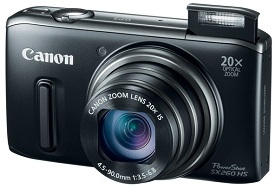 Canon has carved a nice niche for itself in the intermediate camera market. Its more advanced PowerShot models remain relatively thin, but carry nice features, such as large zoom lenses and large LCD screens.
The Canon PowerShot SX260 HS is another strong contender in the Canon family. It includes quite a few advanced features for a point and shoot camera, including an impressive 20x optical zoom lens and a popup flash unit. While the SX260 might be a little chunky to fit in a pocket comfortably, it's still a small model that's easy to tuck away while traveling. The SX260 is a nice-looking camera, offered in dark pink, black, or blue-green; with black trim on the top panel.

For beginning and intermediate photographers, the PowerShot SX260 HS has a nice set of features that can grow with you as you learn more about photography. Beginners can make use of the Smart Auto and Easy modes for simple operation, while intermediate shooters can look to use Program or Manual modes to achieve more control over the shot. Beginners can also take advantage of the basic Hints that are displayed on the screen as you select various functions. Certainly, if you're an advanced photographer, you probably aren't going to find the precise control that you want, and the SX260 cannot shoot in RAW and only can shoot at a maximum ISO of 3200.
Canon's inclusion of a 20x optical zoom lens with this model is arguably the best feature in the camera. The SX260 can move through its full optical zoom range pretty fast, only requiring about 2 seconds, and it moves smoothly. One other thing to keep in mind with this camera is that it can be easy to zoom through the full optical zoom range and into digital zoom range if you aren't paying close attention. On the SX260's screen, the optical zoom range is represented by a white bar, which changes to yellow when the digital zoom range begins, so keep an eye on the screen. You can also turn the digital zoom off via the menu; which we highly recommend.
The SX260 HS measures only 1.29 inches in thickness, so it's not common to find such a thin camera with such a large zoom lens. Canon also included an optical image stabilization feature with this PowerShot model, which is important for a camera with such a large zoom lens. However, you may want to purchase a tripod or monopod to help further steady the camera if you plan to shoot at the maximum zoom quite often, just to protect against slightly blurry photos from camera shake. OIS is a great feature that helps tremendously, but it doesn't work miracles.
With a high-resolution 3.0-inch LCD screen, you probably won't miss the fact that the PowerShot SX260 doesn't have a separate viewfinder. The LCD is sharp and bright, and it doesn't suffer much from screen glare when shooting outdoors in sunlight. This combined eith 461K pixels gives the SX260 a high-quality LCD screen. You can make use of the built-in GPS unit to tag photos taken with the SX260, and you can shoot video at full 1080p HD. Canon included a mini-HDMI slot with this camera, making it easy to display your HD videos on a HDTV; not cable is included.

Bottom Line - I really liked the PowerShot SX260 HS, as it has quite a large number of nice features, while remaining pretty easy to use. It also has enough manual control features that you can use it both as a beginning photographer and, as your skills increase, as an intermediate photographer. The 20x optical zoom lens in a camera is great, and the large, bright, and sharp LCD screen is another nice feature. This camera's biggest drawback is the speed at which it operates, as its autofocus can be a little slow at times the delay between shots may frustrate you from time to time. If you want to make really large prints, you may be a bit disappointed with some of your low-light images due to their softness. However, when the SX260 HS gets everything just right, its image quality is outstanding. The price point or $299 - $349 USD for this camera will drive it out of the budget of quite a few beginners, but, if you can afford this model, you're going to be pretty pleased with the overall results; especially if you need a big zoom lens in a camera that can fit in a pocket ... as long as it's a big pocket, that is.