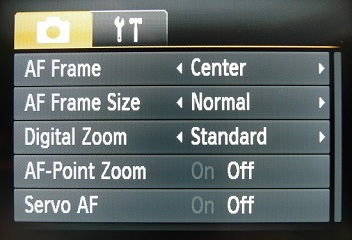 When shooting in Auto mode with the PowerShot SX260 HS, you'll see quite a bit of information on the screen, including the flash mode, number of shots remaining, and battery power remaining.
When you pre-focus on the scene, by pressing the shutter button halfway, you'll see a green rectangle appear in the middle of the scene, alerting you that the camera has achieved focus. In addition, during pre-focus, you'll see the shooting settings for the current image, which are 1/160 shutter speed, f/4.0, and ISO 3200 in this case. While framing you can press the EV button to start tracking a subject via Subject Tracking Autofocus.

Even easier than shooting in Auto mode is the Easy mode that's available with the PowerShot SX260 HS. Easy mode can be selected by turning the Mode dial in the upper right corner on the back of the camera. As you turn the Mode dial, you'll see an explanation of the mode appear on the screen, as shown here. Once you're in Easy mode, you won't see much information on the screen as you prepare to shoot the image. This mode is great for beginners who just want point and shoot simplicity.


Another easy-to-use shooting mode with the SX260 is Live mode. You won't have many options for controlling the cameras settings in Live mode, but you can adjust the lighting and tinting for the image. Just move the slider bars to pick Dark/Light, Neutral/Vivid, and Cool/Warm to change the look of the scene. The LCD screen will display how the scene will look with your changes in real time.

For more control over the shot, Canon has included Manual, Program, Aperture Priority, and Shutter Speed Priority modes with the SX260 HS. As shown here, in Manual mode, you can set the aperture an shutter speed, as well as the ISO, GPS setting, light metering, color tinting, white balance, exposure, burst mode, aspect ratio, resolution, compression, and movie resolution. The icons for these options are listed along the left side of the screen.

Canon has included quite a few interesting special effect modes with the SX260 HS, including a fisheye effect on the mode dial. I wanted to point out two modes in particular, as shown here. With Discreet mode, which is on the mode dial, the SX260 HS turns off the flash and all camera sounds, making it a good mode to use at a location where you could disturb others with camera noises, such as at a play. The SX260's panoramic mode is interesting too, as the camera helps you to align the camera properly, so the multiple images can be stitched together by software built into the camera.

With its built-in GPS unit, the PowerShot SX260 has a feature that can be rare to find in most cameras. It allows you to record the locations at which your photos were shot, making it easier to sort the images later. You will need to work through the GPS setting to turn on the feature. Keep in mind that running the GPS will drain your battery more quickly, so only turn it on if you plan to use the GPS data.

Canon has included a dedicated movie button on the back of the PowerShot SX260 HS, which makes it very easy to create movies. When recording a movie, you'll see the Rec in red on the right side of the screen, as well as the amount of time the movie has been recording across the top of the screen (12 seconds in this case). However, before you begin recording, you're going to want to set the resolution for the movie. You have three options: 1080p HD video, 720p HD video, and SD video.

The primary recording menu on this PowerShot camera will change a bit, depending on which shooting mode you're using. In Program mode, though, you will find nearly all of the options are available, including:

The camera's main Settings menu is shown here, and it doesn't change based on the shooting mode you're using. The options are: