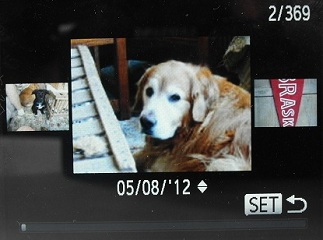 With the PowerShot SX260 HS, you're going to find that the general playback options are pretty similar to other point and shoot Canon cameras. When you press the Playback button, you'll see the images stored on your memory card. Pressing the DISP button will allow you to toggle through options for viewing the images, including an image with no data, with basic data, and with detailed data, including the settings at which the image was shot and a histogram.

Pressing the DISP button a fourth time causes an image to appear on the LCD screen through which you can magnify a small portion of the image, just to make sure it's in sharp focus. Press the zoom ring to the right to activate the magnification, and use the four-way controller to adjust the location where the zoom is occurring.

You also can activate the Magnify feature in the full screen by pressing the zoom ring to the right when any playback image is on the screen. A small map will appear in white in the lower right corner of the screen, showing you which aspect of the image is being magnified in up to 10 steps.

Like other Canon PowerShot cameras, you can make use of the Index feature on the SX260 to scroll quickly through the images stored on your memory card. With a single image on the screen, press the zoom ring to the left repeatedly to call up a 2x2, 3x3, 6x6, and 10x10 grid of images (totaling 4, 9, 36, and 100 images). Then use the four-way controller to move through the grid to find the image you want. Press the FUNC/SET button to bring that single image up to the screen.

One way the PowerShot SX260 HS gives you another option for quickly scrolling through stored photos is by using the control ring on the back of the camera that's mounted around the four-way controller. With a single image on the screen, begin spinning the ring quickly, and you'll see the screen displayed above, where there's one larger image in the middle of the screen and two smaller images on either side of it. Press the FUNC/SET button when the image you want to view is in the center position.

While using the SX260's Playback function, you have the option of deleting photos as well as protecting them. To delete a photo that's currently displayed on the screen, press the bottom portion of the four-way controller. When asked if you want to Erase, highlight Erase and press the FUNC/SET button.

To help to make sure that you don't inadvertently delete an especially important photo, you can mark it as a Favorite. With an image on the screen, press the FUNC/SET button. With the Star icon highlighted on the left side of the screen, press the FUNC/SET button again to "tag" the photo as a Favorite. You can repeat the process to remove the Favorite tag. A Favorite tag won't completely prevent deletion, but you can at least check for any Favorites before deleting images. Use the Protect command to prevent deletions of tagged photos.

You can take a look at the basic information for each of your movies that are stored on the memory card, just as you do with still images. With the movie on the screen in Playback mode with the SX260 HS, press the DISP button to toggle through the data. You'll see an image with no data about how the movie was shot, an image with limited data, and an image with detailed data, including a histogram.

You have an easy option for playing your video clips on the SX260's LCD screen. First, with a movie on the screen in Playback mode, press the FUNC/SET button, and you'll see the play/triangle icon highlighted in orange along the left side of the screen. Press FUNC/SET again to start the movie. Once the movie has started playing, pressing the FUNC/SET button again will cause DVD-like control buttons to appear on the screen, through which you can control the playback. The scissors icon allows you to edit the clip, saving small portions of it.

The main Playback menu has quite a few options that are commonly found on Canon PowerShot cameras, including the SX260. When you're in Playback mode, press the Menu button to call up this menu. The options include:

Finally, the SX260's DPOF Print menu in the Playback function gives you several options for printing directly from the camera, including through your USB cable to PictBridge, Canon SELPHY, and Canon PIXMA printers. The Print menu options for this PowerShot model include: