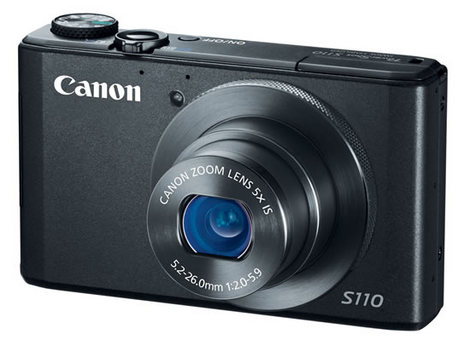 Editor's Note: During 2001, Canon released the Canon PowerShot S110 Digital ELPH camera. The 2012 model of the Canon PowerShot S110 is the follow-up model to 2011's Canon PowerShot S100 and 2010's Canon PowerShot S95.
Following up on the popularity of the S100, Canon has announced the upgraded PowerShot S110 to improve on the touchscreen quality as well as add Wi-Fi capabilities. Similar to the S100, the PowerShot S110 offers a 24mm wide-angle lens with 5x optical zoom as well as the DIGIC 5 image processor. The camera also utilizes the same 12.1-megapixel High-Sensitivity CMOS image sensor and records video in 1080p at 24fps as well as 720p at 30fps. The camera is also slightly more compact than the S100, but weighs the same.
However, the 3.0-inch LCD screen is now a capacitive touch panel and the pixel density has been upgraded from 260k pixels to 461k pixels. In addition, low-light image quality should be improved with with a maximum ISO speed of 12800 instead of 6400 in the S110. If you recall the Canon PowerShot S95, it also had a maximum ISO speed of 12800 and was extremely popular for low-light photography enthusiasts looking for a compact model to slip in a pocket. Canon has also expanded the number of scenes in the Smart Auto feature from 32 to 58.
The new Wi-Fi capabilities of the S110 allow users to send images and video directly to social networking sites like Facebook. In addition, the new Wi-Fi feature allows users to send media to Android or iOS smartphones, a PC or to other PowerShot cameras. Images can also be sent to a Wi-Fi enabled printer for quick printing of new photographs.
Canon PowerShot S110 Feature Set:
The Canon PowerShot S110 is available in both black and white with a MSRP of $449.99 USD. Click our lowest price button at the top right for the most current online pricing.
What's in the box?:
Additional Views:
You can check out the price of this camera on Adorama by clicking here.