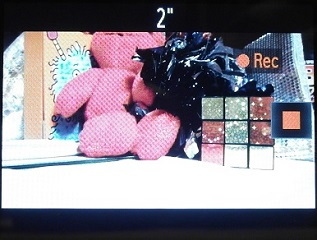 Please excuse the poor quality of these screen captures. The PowerShot N kit does not include an AV output cable, therefore we had to photograph the LCD.
Although the Canon PowerShot N digital camera has a vastly different physical look than almost any other kind of camera on the market, the N's display screen and menu structures look almost exactly like other PowerShot cameras that are available.
When shooting in Auto mode, across the top of the screen you'll see the resolution setting, image storage space remaining on the memory card, movie resolution, movie recording space remaining on the memory card, image stabilization mode, and shooting mode with the flash mode icon just under it. In the upper left corner, you'll see the battery charge icon, burst mode icon, and the touch screen icon. Along the right side, you can touch the red dot to start and stop recording movies. The Func button in the lower right corner opens a popup menu to change the basic camera commands.
If you touch the Disp button in the lower right corner, you can change the information shown on the screen. After touching the Disp button, all of the icons will disappear, other than the image stabilization icon, shooting mode icon, movie button and Disp button. Touch Disp again to return the data to the screen.
When you touch the shooting mode icon in the upper right corner, you can use the subsequent menu to change from Auto mode to Program (P) mode or to other shooting modes. In Program mode, you'll see the same icons displayed on the screen as in Auto mode, other than the ISO setting in the lower right corner. Again, press the Disp button to remove all of the icons.
When you touch the Func button, you'll open the popup menu along the left side of the screen. Use the touch screen to scroll through the various options and then touch the menu or command that you want to activate, similar to the way you'd operate a touch screen smartphone. As the commands appear on the screen, you'll see a brief explanation of the feature on the screen, which is great for beginners.
The PowerShot N's popup menu options will change depending on which shooting mode you've chosen. The Program mode has the most options available, and some options will be grayed out in other shooting modes.
When you touch the shooting mode icon in the upper right corner of the screen, you'll open the mode pages, which also include the special effect modes. You then can select the shooting mode you want to use, which are: Hybrid Auto, Auto, Program, Fish-eye Effect, Miniature Effect, Toy Camera Effect, Soft Focus, Monochrome, and Super Slow Motion Movie.
Hybrid Auto is a relatively new mode for PowerShot cameras, in which the camera automatically will record a few seconds of video before you shoot each still image, just in case you later decide that the scene would've made a good video clip. Just remember that the camera must be pointed at the scene for a few seconds before you shoot the still image, or the video recording won't work.
Use the toggle switch on the right side of the camera to switch from basic shooting modes into Creative Shot/Six in One mode. When you shoot in Creative Shot mode, you'll hear the camera make three shutter sounds. It then will record six images of the same scene, each of which will have a different special effect applied to it. The PowerShot N applies the special effects automatically and they can't be changed. All six images will appear on the screen for a couple of seconds after you shoot a scene in Creative Shot/Six in One mode.
To shoot a movie with the N, you just touch the red movie record button along the right side of the screen in the basic shooting mode.
You'll see a red "Rec" icon in the upper right corner as the video is recording and the time the recording has been occurring across the top. To stop the recording, press the red square on the right side.

When you press the Func button, you'll see the popup menu on the left side and a Menu button on the right side. Touch the Menu button to open the camera's main menus. Because it's a two-step process to open the Menu window, it might be a little tough for photographers to find the menus initially.

The camera icon in the upper left corner of the Menu window will provide access to the camera's shooting functions. Just drag your finger across the screen to scroll through the menu options, and touch/tap on a menu option to see additional options or to select an option. The shooting menu options include:

Touch on the tools icon tab to access the Setup commands.
It would have been nice if Canon had redesigned its menu windows for the PowerShot N to take into account the touch screen capabilities of this camera. Instead, the N's menu windows look almost exactly like the menu windows on every other PowerShot camera, including those without touch screen capabilities. Because the menus weren't redesigned, it's almost slower to try to access the menus using the touch screen than it would be to use a four-way button.
When you press the Wi-Fi button on the right side of the camera, you'll see a message on the screen, telling you that the camera is searching for available Wi-Fi access points. After the first point is found, you can search for additional Wi-Fi points by touching the Switch Network button.