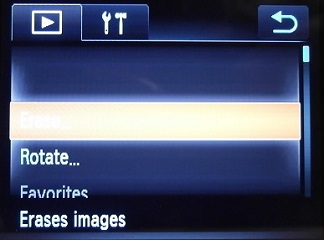 Please excuse the poor quality of these screen captures. The PowerShot N kit does not include an AV output cable, therefore we had to photograph the display screen.

If you touch the Wi-Fi icon, you can open the Wi-Fi connection screen.

Touch the screen at the left or right edge to scroll ahead to the next image or back to the previous image.

Touch the Func button to call up a popup menu that gives you a few editing options for each of your images. The popup menu options are:

The Playback menu is indicated by the Play icon in the tab in the upper left corner of the screen. Some of the options may be grayed out, depending on the types of images you have stored on the memory card. The PowerShot N's Playback menu options are:

The Setup menu can be accessed from the Playback screen, too, by touching the tools icon along the top of the screen.