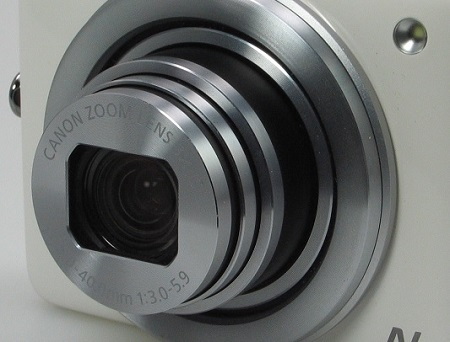 The 8x optical zoom lens offered in the PowerShot N is a good telephoto option for such a small camera. It has a 35mm equivalent of 28 - 224 mm, so it offers an average wide angle setting for a point-n-shoot camera.
When the N is powered down, it has a thickness measurement of almost 1.25 inches. When you turn on this camera, the lens extends beyond the camera's body a little bit, resulting in a camera that measures about 2 inches in thickness. Extending the zoom lens to its full 8x telephoto setting pushes the camera's thickness to almost 2.75 inches. The lens retracts fully inside the lens housing when you turn off the camera, and a panel automatically covers the lens glass to protect it.
The 8x zoom lens moves through its entire telephoto range in about 1.5 seconds, which is pretty fast, especially for point-n-shoot cameras. However, because you must manually twist the really thin zoom ring that's tightly aligned to the camera's body, it can be a little awkward to make this feature work. You may have a difficult time achieving the 1.5-second mark until you practice with this camera's zoom ring for a while.
Canon included a 1/2.3-inch CMOS image sensor with this camera that offers a maximum resolution of 12.1 megapixels. Although most point-n-shoot cameras have a similar sized image sensor, the CMOS technology included with the Canon PowerShot N gives it better low light capabilities versus what you may see with a CCD image sensor.
Canon uses a through the lens autofocus system with the N. It has a focus range of 0.4 inches (1 cm) to infinity at wide angle and 3.3 feet (1 m) to infinity at telephoto. There is no macro mode with this camera. It has a lens aperture ranging from f/3.0 (wide angle) and f/5.9 (telephoto).
In this photo you also can see the tiny round flash unit in the upper right corner. This is an extremely small flash and it isn't overly successful in creating high quality flash images. Canon may have been better served to give the PowerShot N a couple of continuous LED lights as you might see with underwater cameras, rather than this tiny flash unit.
Additionally, if you're like me and you attempted to hold this camera with your left hand while activating the touch screen shutter with your right hand, you will have to be very careful to avoid blocking the flash with the fingers on your left hand.
When viewing the PowerShot N from the top, you'll see some markings on the silver lens ring close to the while camera body. These markings are important because they take place of the shutter button and zoom ring/switch combination that most cameras have. The N doesn't have a traditional shutter button.
The inner-most ring has three notches on it. This is the camera's zoom ring. You turn this ring to the right to increase the telephoto measurement (zoom in) and to the left to zoom out. It's a mechanical zoom ring, as it only moves about 1/4th of an inch. When the ring is turned the full 1/4 inch, the lens will begin moving.
The ring just beyond the zoom ring serves as a shutter button. Place your finger on the three dots and press downward to activate the shutter. You can activate the shutter by touching the LCD screen, too.
If you flip the camera upside down, you'll see the three notches and three dots on the bottom side of these lens rings, too. You can use these features with the camera turned either upward or downward, and the LCD's orientation will automatically adjust itself.
Canon has included a 2.8-inch LCD touch screen with 461,000 pixels of resolution with the N, and the touch screen is very responsive. The majority of the camera's controls will occur through the touch screen LCD.
The LCD produces sharp images, but you will have to clean the LCD often as it seems to collect fingerprints and smudges quite easily. It's unfortunate that Canon choose to include its typical PowerShot camera menu structure with the N, rather than redesigning the menus to make them work better with a touch screen format.
The PowerShot N's LCD does have a bit of a glare problem when shooting outdoors, but you can deal with this problem by increasing the brightness level or by adjusting the tilt angle of the screen. The N's LCD can rotate upward to a 90 degree angle. It's a little disappointing that Canon didn't give this camera's LCD a bit more flexibility so that it could tilt up to 180 degrees, which would have make it easier to shoot self-portraits. It's obvious Canon is aiming the PowerShot N at young photographers, so making the camera work for self-portraits would have been a smart option.
The display orientation on the PowerShot N will rotate automatically 180 degrees as you turn the camera. The display doesn't rotate 90 degrees, though, similar to what a smartphone screen can do.
By allowing the screen to be viewed properly when the camera is either right-side-up or upside-down, you can use the camera in the upside-down position if you want. Just remember that the tiny built-in flash will then be on the underside of the lens, making it almost useless.

There are tiny buttons on both sides of the PowerShot N's camera body. The power button is on the left side of the camera (as you're holding it), and even though it's very small, it is raised away from the camera body just enough to make it pretty easy to press when you're in a hurry.

The right side of the N has a few small control buttons, too.
At the top of the right side is the toggle switch. Slide the switch to the left for the camera's basic shooting modes and slide the switch to the right to make use of the PowerShot N's Creative Shot feature. When you activate the shutter in Creative Shot, the camera records six images simultaneously, applying six different special effects to the images.
The N automatically selects the special effects, and they cannot be changed. Nowhere in the camera's documentation is listed exactly which special effects are used, but they appear to include a vignetting effect, a monochrome effect, a vivid effect, a 16:9 aspect ratio, a 1:1 aspect ratio, and a zoom effect.
It's a little odd to have this Creative Shot/Six in One feature so readily accessible through a toggle switch. It would be better if the toggle switch gave you access to more commonly used shooting modes, such as Auto mode on one side of the switch and Program mode on the other side. If photographers really wanted to use the Creative Shot/Six in One mode, they could select it through the touch screen, as it's unlikely that most photographers will use this mode too often.
Just below the toggle switch is another very small button that's used to activate the PowerShot N's Wi-Fi connection features. Press this button and the N will seek the closest Wi-Fi-enabled smartphone or a Wi-Fi network to which to connect. Or you can set up the N as its own Wi-Fi hot spot.

On the lower portion of the right side of the PowerShot N, you'll find the Playback button in blue. Use this button to open Playback mode where you can access the images stored on the camera.
Below that on the panel covering marked "Digital," you'll find the USB port. You will have to tilt the LCD screen upward to be able to remove the flexible hinged covering to gain access to the port.

Canon included a rechargeable li-ion battery that's shaped similarly to an AA battery for the PowerShot N. The battery fits in the compartment on the left side of the bottom panel (as shown here). The N kit also includes a separate battery charger with this camera, which is a nice feature for those who want to purchase and make use of two batteries with this model.
You can access the hard plastic hinged battery compartment cover without tilting the LCD.
On the right side of the bottom panel is the micro SD memory card slot. The PowerShot N cannot use regular sized SD memory cards. This slot is also protected by a hard plastic hinged cover. You will have to tilt the LCD upward to open the cover.
The PowerShot N has a really sturdy feel to it and it appears to be a very well built model. There's no give or looseness in the hinges on the hard plastic compartments or the tiltable LCD.