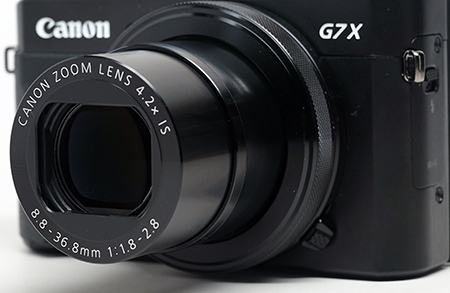 Around the lens is a control ring that is used to adjust various settings, depending on the current shooting mode (or which custom function you set it to).
Assisting with your low-light shooting situations, the G7Xii sports a pop-up flash unit with a range of up to 23ft. at the wide end (ISO Auto). This will help to light your subjects from a short distance and also works very well as a fill light in harsh lighting conditions.
Composing and viewing your images is accomplished with the 3.0-inch, 1.04 million dot tilting touch LCD screen. The screen shows 100% of the image area and a full set of shooting settings and controls. This is also how you navigate the camera menu systems and view your captured images as well.
On top of the camera there are just a few controls, keeping the camera simple and easy to use. From left to right you have the power button, shutter release coupled with the zoom lever, and a dial with the mode selection on top and the exposure compensation on the bottom.
The back of the camera is fairly simple as well, with most of the control coming from the 4-way controller in the middle. Each direction represents a shortcut to a commonly used shooting setting, keeping you out of the menus and shooting as much as possible. The center button is a shortcut to the "Q"uick menu as well as the button used to make your menu selections. Around the 4-way controller you will find the Menu, Playback, Video recording and Ring Func. buttons. The ring function button allows you to quickly change which setting is affected by turning the ring around the lens of the camera.

On the right side of the camera you will find the two i/o ports under a protective cover. On top is the high-speed USB port allowing you to transfer images from the camera to a computer or printer. On the bottom is an HDMI output, allowing you to view your images and HD videos on any HDTV.
At the bottom of the image you see the WiFi button, which is a shortcut to the camera's WiFi options. Here you can choose to upload images to a computer, connect to a smartphone, print to a wireless printer or even transfer images to other compatible Canon cameras.

The G7Xii accepts all SD/SDHC/SDXC type memory cards to store your images and HD movies. To keep up with the high quality video and burst shooting capabilities, we recommend having at least a USH-1 card of at least 16GB in size to keep up with what the camera is capable of. The camera is shown here with the Panasonic UHS-3 16GB SDHC memory card that was used to test the camera.
Powering the Canon PowerShot G7Xii is 3.6V, 1250mAh rechargeable Li-Ion battery. This battery is capable of powering the camera through 265 shots in its regular shooting modes and a fantastic 355 shots with ECO mode. Also included with the camera is a portable charger, allowing you to charge your battery, and a spare just about anywhere anywhere.