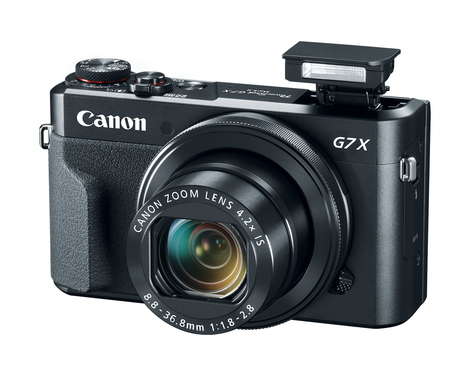 Canon has taken their popular G7 X from 2014 and made some key improvements to create the all new PowerShot G7 X Mark II. While most of the hardware remains unchanged, including the same 20MP 1-inch CMOS sensor and fast f/1.8-f/2.8 4.2x optical zoom lens, Canon has added their new DIGIC 7 processor to the G7 X MK2, which offers faster processing, improved subject tracing, enhanced subject detection, and better overall noise reduction in both stills and video.

The 3.0-inch touch panel display has also been improved, with the ability to now tilt downward; compared to the display on its predecessor that only tilted upwards. While the control layout is pretty much the same, Canon has added a new Wi-Fi button, and they've improved the control ring around the lens bezel. A new lever allows you to choose between the stepped control found on past models or a new continuous control.

Canon has also added various new functionalities to the G7 X MK2, many of which are borrowed from their EOS line. These include expanded ISO (now up to 25,600), in-camera RAW file conversion, their Auto Lighting Optimizer function, time-lapse movie mode, and picture style options. All of which give the G7 X MK2 a more sophisticated, professional feel. Canon is trying to give you all of the quality and functionality of an EOS DSLR, but built into a premium fixed lens, Prosumer camera.

The Canon PowerShot G7 X Mark II sports a MSPR of t $699.99, and is offered in any color you want; so long as that's black. See our lowest price box at the top right of this page to see current online pricing.