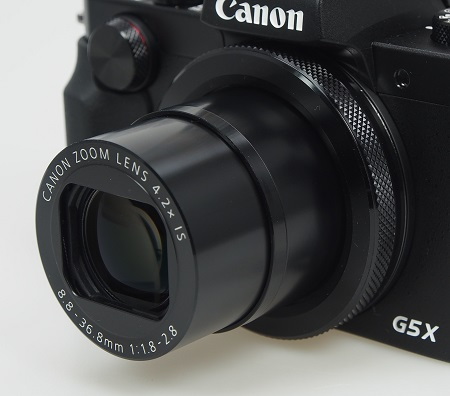 The 1-inch, 20.2MP CMOS image sensor in the Canon G5 X is the same size and resolution as what you'll find with the slightly older PowerShot G3 X and G7 X, which are other units in what Canon calls its premium compact series of cameras.
The G5 X offers 20.2-megapixels of resolution in a sensor that measures 13.2 by 8.8 mm, and it produces outstanding image results in a number of different shooting conditions. You can record in either RAW or JPEG with the G5 X, or you can record in both image formats at the same time. Setting up the camera to shoot in both RAW and JPEG at the same time is a tricky process, as you must work through the shooting menus. You cannot shoot in both image formats just by adjusting the settings in the Q menu screen, which would have made a lot more sense.
All three cameras also contain a DIGIC 6 image processor, which is Canon's latest processor and provides very strong performance speeds and low light performance with an ISO range from 125 to 12,800 available. The G5 X's top burst mode performance is 5.9 frames per second in JPEG, which is a solid performance level. The unit's performance slows considerably when shooting in burst mode with the RAW image format though.
One area where the Canon G5 X differs greatly from the G3 X is in its optical zoom lens. The G3 X offered a 25x optical zoom, while the G5 X has a 4.2x optical zoom, which matches what was found on the G7 X.
The PowerShot G5 X is a bit of a chunky camera to start with, thanks to a series of dials. But the placement of its viewfinder, which extends above the top panel, is the primary reason for the camera's odd shape. The G5 X measures just shy of 2 inches in thickness when powered down, as the lens retracts completely inside the lens housing. When powered up, the lens extends away from the camera a bit and the camera is about 3 inches in thickness. With the zoom lens fully extended, the camera measures about 3.5 inches in thickness.
The G5 X's maximum aperture is f/1.8, which provides the ability to shoot some great portraits with a wide open aperture. The G5 X's autofocus range is:
You'll adjust the zoom lens using a zoom ring around the shutter button. There is a ring on the lens housing -- you can see the textured surface of the ring in this photo -- but it's used for changing camera settings in certain shooting modes, rather than adjusting the optical zoom measurement, such as you'd do with a DSLR camera's zoom lens. There's also a command dial on the front of the camera, visible in this photo to the left of the lens housing, which provides a further means of adjusting the PowerShot G5 X's settings.
Another improvement on the G5 X is the larger right-hand grip versus some of the other models in the G family, especially the G7 X, making this model easier to hold and use versus some other premium compact cameras.
One of the reasons the PowerShot G5 X has an odd design with quite a few weird angles is because of the flash unit, which is centered over the lens in the same area of the camera as the viewfinder. It's not technically a popup flash unit, which rises out of the camera body. Instead, it's a flip flash, where you'll grab the flash lid and pull it up and back to open the flash unit manually. There's no button to open the flash, so don't waste a few minutes looking for one like I did.
Despite its odd look and design, this flash unit works well and provides a great angle to the scene. You also can add an external flash unit through the G5 X's hot shoe, which is directly behind the flip up flash.
When the flash unit is flipped open, you'll be able to press the flash button (right side of four-way button) on the back of the camera to see the flash mode options on the display screen, which are: Auto, On, Slow Synchro, and Off in the Program shooting mode. In Auto shooting mode, you'll only be able to shoot with Auto or Off flash modes.
The PowerShot G5 X's flash range is:

Canon placed the PowerShot G5 X's mode dial on the left side of the camera's top panel. The white mark indicates the currently selected shooting mode. The options on the mode dial are:
The hot shoe is to the right of the mode dial, centered on the top panel of the camera.
On the right side of the PowerShot G5 X's top panel is the EV dial on the right. Keep in mind this dial only works when you're shooting in an advanced shooting mode.
To the left of the EV dial is the shutter button, which is surrounded by the optical zoom ring. The shutter button was a little small for my liking. The power button (on the far left of this image) was also a bit small to be easily pressed when you're in a hurry.
One of the biggest advantages of the Canon G5 X versus other premium compact PowerShot cameras is the inclusion of an electronic viewfinder. This is an extremely sharp EVF, offering 2.36 million pixels of resolution. It's sharp enough that you can use the Q menu inside the viewfinder by pressing the Q/Set button and working with the four-way button.
As you lift the viewfinder to your eye, the G5 X will automatically switch the display from the LCD screen to the viewfinder.
Speaking of the G5 X's LCD screen, it's also very sharp and bright. Five levels of brightness settings are available. Canon offers 1.04 million pixels of resolution with this model's display screen, which measures 3 inches diagonally.
It's also a touch screen, which works particularly well with the Q menu icons. The touch screen also works well when you're reviewing the stored photos, allowing you to use it almost like a smartphone or tablet.
The LCD screen fully rotates, allowing you to shoot selfies or other odd-angle photos. The fully articulated display screen helps to set the G5 X apart from other cameras in its model range, as those cameras offer only a tilting touch screen display, such as the G3 X, or a fixed display screen.


The right side of the Canon G5 X's back panel contains the standard control buttons you find on most cameras. At the top, built inside the thumbpad, is the video recording button, which has a red dot on it. Even though this is a bit of an odd placement for this button, I never inadvertently triggered a movie recording by pressing it through general use of the camera.
Just below the thumbpad on the left is the AEL button. When working in Playback mode, this button will delete the current photo. To the right of this button is the AF frame selector button (marked with a square and cross icon). It doubles as a search button while in Playback mode.
The four-way button also doubles as a dial you can spin to move through choices or stored photos more quickly. Press the edges of the four-way button to scroll through menu options or to open popup menus in certain shooting modes. The four-way button menu options in Program mode are:
In Playback mode the Autofocus/Continuous Mode button will open the Wi-Fi screen, allowing you to connect to another Wi-Fi camera, a smartphone, a computer, a Wi-Fi printer, or the cloud.
In the middle of the four-way button is the Q/Set button, which you'll use to open the Q menu or to make menu selections.
Along the bottom of the right panel are two buttons. The Playback button on the left allows you to see your photos and videos stored on the memory card. The Menu button on the right allows you to open the G5 X's menus in shooting or Playback modes.

The PowerShot G5 X's ports are on the right-hand side of the camera, protected by a soft cover with hinges. The mobile connect button is at the lower part of this photo.

This model has three ports, which are (from top to bottom):
The battery and memory card slots are on the bottom of the PowerShot G5 X, protected by a hard plastic door with a metal spring hinge, which locks in place with a toggle switch.
Canon shipped a separate battery charger with this model, so it's easy to purchase a second battery and charge one battery while using the second one. And you may want to do just that because the battery life for this model is below average. Canon only estimates the G5 X's battery life for 210 photos, and my tests showed a number just under 200 photos per charge.