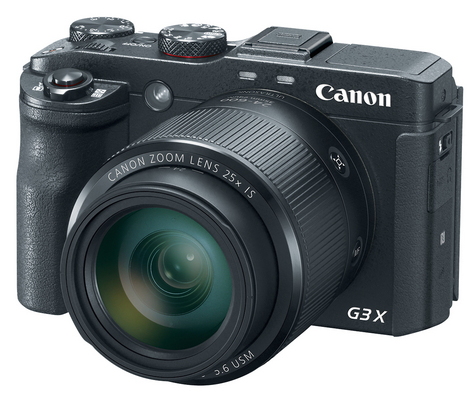 Aimed at advanced amateurs looking for a second camera or a point-and-shoot alternative to an entry-level DSLR or Micro Four Thirds ILC, Canon has announced the G3 X for 2015. It sits next to the G1 X Mark II as this series' co-flagship model, and slightly above the G7 X.

The G3 X has been constructed with a weather sealed -- dust and water resistant -- magnesium alloy body equivalent to the EOS 70D DSLR. The camera boasts a 20.2-megapixel image sensor (as seen in the G7 X) as well as the DIGIC 6 image processor and a 24-600mm (equivalent) f/2.8-5.6 optical zoom lens. To handle such a long zoom range, Canon has added a 5-axis intelligent image stabilization system as well as digital image stabilization. This camera offers numerous shooting modes, including Programmed Auto, Shutter Priority, Aperture Priority, Manual, and Bulb. Still images can be captured in either the JPEG or RAW image format.

The G3 X also features Full 1080p HD movie recording in the 24p, 30p, and 60p frame rates. HD video recording length is limited to 29 minutes. 720p HD and VGA video recording is also available at 30p. To aid with professional video production, Canon has built in a headphone jack to monitor audio, a stereo input to record from an external microphone, HDMI Live Feed to output to a monitor, and a three-stop ND filter for bright shooting conditions.

Images (and videos) are composed via the 3.2-inch tilting touch screen LCD with a 1.62-million dot resolution. This LCD tilts up 180 degrees as well as down 45. There is no built-in EVF (Electronic View Finder); however, you may choose to purchase the optional EVF-DC1 that is compatible with both the G3 X as well as the G1 X Mark II.

The G3 X also features built-in Wi-Fi and NFC technologies for pairing this point-and-shoot to an iOS or Android device running a free app. From there, it's easy to transfer or share images and videos on social media, or to even use your smartphone or tablet as a remote control / monitor.

The Canon G3 X is available with a suggested retail price of $999.99. See our best price box at the top right of this page to see current online pricing.