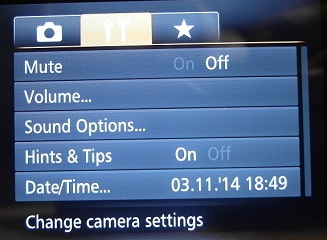 Please excuse the poor quality of these screen captures. The PowerShot G16 kit does not include an AV output cable, therefore we had to photograph the LCD.

When you twist the PowerShot G16's mode dial, you'll see the various options appear along the top of the screen with the currently selected mode in orange. A brief explanation of each mode will appear as well. The mode dial options are:
On the G16's Auto shooting screen the current mode is listed in the upper left corner. Other icons across the top indicate the image stabilization mode, battery charge, still image resolution, photo space remaining on the memory card, video resolution, and video time remaining on the memory card.
Press the Disp button on the back of the camera to change what's shown on the LCD screen. You can add any combination of these three items: 3x3 grid lines, an electronic level, and a histogram. Or you can remove all information from the screen. Use the Custom Display command inside the G16's menus to determine what's displayed on the main shooting screen each time the Disp button is pressed.
Pressing Disp a second time shuts down the LCD, leaving only the viewfinder available to frame photos, which will save battery power. Press Disp again to return to the original shooting screen, which also can be customized through the on-screen menus.

Another shooting mode beginners will appreciate is the Scene Mode option, which can be selected by turning the mode dial to SCN. Then press the Set button on the back of the camera to activate the popup menu, which will appear along the left side of the screen.
The current scene mode will be highlighted in orange at the top left of the screen, while the other scene mode icons will appear along the bottom of the screen. Use the left and right areas of the four-way button to scroll through the scene mode icons, which are:
With the desired icon highlighted, press Set again to select that scene mode.
The Star mode is one of the interesting additions to the PowerShot G16. When combined with a tripod, you can shoot starry skies and capture star trails. The camera will automatically capture the images over a period as long as 2 hours when shooting star trails for example.
When shooting in Program mode, you'll see the same set of icons across the top of the screen as you saw in Auto mode. Again pressing the Disp button changes the look of the screen. The current ISO setting is displayed along the bottom of the screen along with the EV setting.
In Manual mode you'll have the option of adjusting the shutter speed and the aperture setting using a couple of dials on the camera, providing quick access. The command dial on the front of the camera controls the shutter speed, while the four-way dial controls the aperture. You can see a digital representation of these settings along the bottom of the screen.
Manual focus is an option with the PowerShot G16. Just turn the mode dial to one of the advanced still image shooting modes and then press the upward portion of the four-way button (marked with MF) followed by the Set button. Once in manual focus mode, you will spin the four-way button to change the focal length for the lens, as shown by the graph displayed on the right side of the screen.
Press the right side of the four-way button (marked with a lightning bolt icon) to magnify the scene on the screen to 2x or 4x to make it easier to ensure a really sharp focus. Once you have the focus as sharp as you want, press the Set button to lock it in. Then press the shutter button to record the photo.
To exit manual focus and return to autofocus mode, press the left side of the four-way button.
The EV dial on the top of the camera is a great way to make quick changes to the exposure value. As you adjust the dial, you'll see the scene on the screen change, helping you determine what the exposure will look like. The graphical dial on the screen shows the current EV setting.
Canon migrated one of the better control features to the G16 from other PowerShot cameras, which is the popup menu. From any shooting mode press the Set button to display the popup menu icons along the left side of the screen. Use the up and down portions of the four-way button to navigate through the popup menu selections by highlighting the icons along the left side of the screen, and then use the left and right portions of the four-way button to make selections within each popup menu option by using the icons along the bottom of the screen.
The popup menu options will change depending on which shooting mode you're using. You also can access the Func. Menu Layout command in the shooting menu screen to change what's displayed in the popup menu. The options in Program mode are:
In Auto mode, you'll only see the Self-Timer, Drive Mode, Aspect Ratio, Resolution, and Movie Quality as popup menu options.
To see the PowerShot G16's special effect options, turn the mode dial to the interlocking rings icon. Then press the Set button to open the popup menu. Highlight the icon at the top of the popup menu to see the special effect options along the bottom of the screen, which are:
From almost every advanced shooting mode you'll have the option of using the My Colors function, which allows you to apply a special effect color to the scene. The My Colors options, listed below, are available through the popup menu.
When recording movies with the PowerShot G16, you'll have the ability to add and remove data from the screen as shown here by pressing the Disp button. Once you press the red record button on the back of the camera, the screen's data will change to show the red Rec message in the upper right corner and the amount of time elapsed across the top of the screen.
Another area that remains consistent in the design of PowerShot cameras in the past few years is the look and navigation of the on-screen menus. When you compare this design to that of some of the more easy-to-navigate camera menu designs on the market right now from other manufacturers, Canon's PowerShot line could use a significant redesign here.
After you press the Menu button on the back of the camera, the camera control menus are indicated by the camera tab on the far left. As shown here, the options in the camera control menu will change depending on which shooting mode you've picked on the mode dial. More options will be listed in more advanced shooting modes. The options listed below are available in Program mode.

The Setup menu is marked with the tools tab in the upper middle of the menu screen. The G16's Setup menu options are:
The far right tab is the customizable My Menu settings, allowing you to pick certain menu options that you can store under the My Menu tab for quick access.