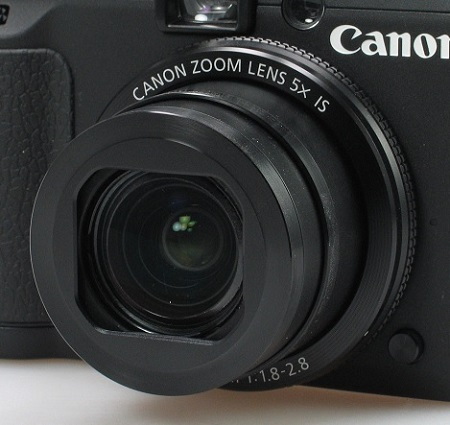 The 5x optical zoom lens (28 - 140 mm) built into the Canon G16 is a high-quality model, offering identical qualities to the lens that Canon included with the G15. It only requires a little over a second to move through the entire 5x optical zoom range, although it would have been better if Canon had included more of a "stop" between the optical zoom and digital zoom ranges, as it's easy to inadvertently move from optical zoom settings into digital zoom territory when using the zoom ring. You can turn off digital zoom in the camera's menus if this quirk becomes an annoyance for you.
The G16's lens retracts completely inside the camera's lens housing when the unit is powered down, meaning the camera measures about 1.6 inches in thickness when powered down. When you press the power button the lens automatically extends about 1 inch beyond the lens housing. At full telephoto the lens extends about 1.5 inches beyond the lens housing.
Canon included a 1/1.7-inch CMOS image sensor with 12.1-megapixels of resolution with the PowerShot G16, which is the same as the previous model (the G15). One of the biggest differences between this camera and the G15 is the inclusion of Canon's DIGIC 6 image processor, which provides better video and improved still image performance speeds and quality over the G15's DIGIC 5 processor.
This fast lens has a minimum aperture of f/1.8 at wide angle and f/2.8 at telephoto, and I thought its macro capabilities were especially strong. The G16's focus range is:
Along with its TTL autofocus mode, Canon included a manual focus option with the PowerShot G16.
By pressing the round button to the lower right of the lens housing, you can remove the outer ring on the lens housing, allowing you to attach optional tele-converters and lens adapters to the G16's lens.
As it did with the G15, Canon included a popup flash unit with the PowerShot G16, which is activated by pressing the flash toggle switch on the top panel of the camera. The flash does not open automatically whenever the flash is needed, so you can shoot without flash by simply keeping the flash popup unit closed.
When the flash is extended, you can shoot in three different flash modes, Auto, On, and Slow Synchro. The built-in flash's range is
On the left side of the top panel of the camera, you can see the popup flash compartment outlined with the PowerShot G16 label in the middle. The flash toggle switch is below the compartment.
To the right is the G16's hot shoe, which allows you to connect an external flash unit or another type of accessory.
The right side of the PowerShot G16's top panel includes a variety of dials and buttons, and it looks identical to the set of controls on the G15. On the far lower right of this photo is the power button, which is flush to the camera body and is pretty small, making it difficult to find and press the button when you're in a hurry. The middle of the power button contains a green light, indicating when the camera is powered on.
Above the power button is the shutter button, which is surrounded by the zoom ring. This shutter button is a good size and is smartly positioned, with a raised notch that extends just beyond the camera body frame, making it easy to use. In this photo you also can see the command dial on the front panel, which appears just above the zoom ring.
The dials to the left of the power button include a mode dial above and an exposure valuation dial below. The dials are stacked on top of each other, allowing each dial to be of a large size, while providing easy access to both of them. The exposure valuation dial provides settings between -3 and +3 in 1/3 step increments.
The mode dial has 11 options. A brief explanation of each mode appears on the G16's LCD screen as you twist the mode dial.
This image shows another view of the G16's dials on the top panel, illustrating how they are aligned.
You can use the PowerShot G16's LCD to frame your photos. The LCD measures 3.0 inches diagonally and offers a high-resolution screen with 922,000 pixels, as did the LCD on the G15. It has no ability to tilt or swivel away from the camera body, as was available with the G12 from a few years ago. Five different LCD brightness levels can be set through the on-screen menus.
Just as did the G15, the PowerShot G16 contains an optical viewfinder with a diopter adjustment dial, shown here to the left of the viewfinder. Indicator lights to the right of the viewfinder help you determine when the camera's autofocus mechanism has achieved a sharp focus. The top light will be a steady green when a sharp focus has been achieved when shooting without the flash, while it will flash green if the autofocus has not achieved a sharp focus. The lower light indicates the same situations, but it's red and only operates when you're shooting a flash photo.
To the right of the viewfinder you'll see the Playback button, marked with a blue triangle.

As with most PowerShot cameras, most of the control buttons are located along the right side of the back panel.
At the top is a thumbpad that contains the movie recording button (red dot in the center) and the shortcut button (S in the center). through which you can assign a commonly used feature that might not be included on any other buttons. (On the G15 the shortcut button was to the left of the viewfinder.)
Just below the thumbpad are the ISO and AE/FE lock buttons. In Playback mode these buttons control the delete and image filtering functions.
The four-way button consists of a ring you can spin to move through menu options or stored photos more quickly. You control the G16's manual focus function with the upper part of the ring, the flash setting with the right side, the information displayed with the lower part, and the macro setting with the left side. The Set button in the middle opens the popup menu and allows you to make menu selections.
Along the bottom are the autofocus frame selector and the Menu button. The autofocus frame selector button controls the PowerShot G16's Wi-Fi functions in Playback mode.


The G16 has a hinged compartment on the right side of the camera that houses the camera's ports.
The upper port is a remote terminal. The middle port is the USB and AV port. You'll find the HDMI port at the bottom of the compartment.


Canon included a thicker battery with the PowerShot G16 than with most of its less expensive PowerShot models, and it pays off in a longer battery life than those types of cameras. (This is the same battery pack found in the G15.) Canon rates its G16 battery life to 360 shots when using the LCD to frame photos and 770 shots if you use the viewfinder with the LCD turned off. I couldn't quite duplicate these numbers in my tests, but you can easily expect 250-275 photos per battery charge under normal usage, which is a good performance level.
The battery and memory card compartment are protected by a hinged door on the bottom panel of the camera. It accepts SD type memory cards, shown here with a speedy Sandisk Extreme Pro 8GB SDHC card.
Canon included a separate battery charger with this camera, making it easy to charge one battery while using a second, if you choose to purchase a second battery.
One thing Canon did not include with the G16 kit is a USB cable, which is difficult to understand in a camera that has a price tag as high as this one. If you want a USB you'll have to purchase one separately.