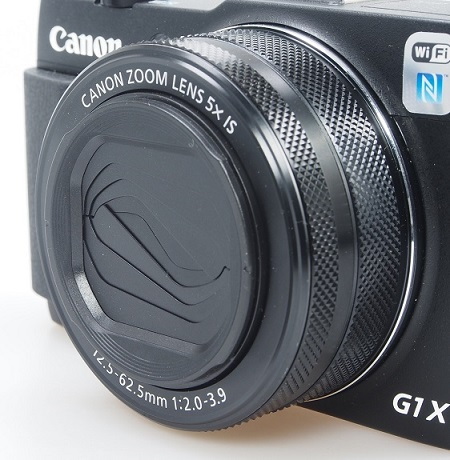 Canon gave the PowerShot G1 X Mark II a 1.5-inch image sensor, which is one of the largest physical image sensors in a fixed lens camera, measuring 12.5 by 18.7 mm. The CMOS image sensor has 12.8-megapixels of effective resolution when shooting at a 3:2 aspect ratio and 13.1-megapixels at a 4:3 aspect ratio. This models image sensor includes Canon's HS (High Sensitivity) technology, which aims to improve the camera's performance in low light scenes.
The DIGIC 6 image processor is the latest offering from Canon, providing improved image quality with both still images and video, as well as better performance speeds. The G1 X Mark II makes use of optical image stabilization.
The G1 X Mark II offers a 5x optical zoom lens that has strong wide angle capabilities in a 24 - 120 mm equivalent. The lens moves through its entire optical zoom range in about 1.5 seconds.
Although this model includes a fast lens -- with a minimum aperture of f/2.0 at full wide angle and f/3.9 at full telephoto -- it's not quite as fast as lenses you'll find on other high-end fixed lens cameras.
The G1 X Mark II's autofocus range is:
You also have a manual focus mode with this model. The focus ring is visible here as the second ridged ring on the left of the lens housing.
When you're ready to shoot a flash photo, you'll press the flash toggle switch on the side of the camera to pop up the flash unit. The flash will not raise automatically when needed, and you'll have to open it manually.
The flash raises well above the body of the camera, providing a good angle to the scene, regardless of the extension of the lens.
The four flash modes available with the PowerShot G1 X Mark II are: On, Off, Auto, and Slow Synchro. You can only access the flash modes on the screen when the flash is raised.
The flash range for this model is:

Most of the control buttons for the Canon G1 X Mark II are along the right side of the top panel. On the far right is the mode dial, through which you can select the shooting mode. The 12 options include:
To the left of the mode dial is the shutter button, which is surrounded by the zoom ring. Below the shutter button is the power switch. To the left of the power switch is the Playback button, allowing you to enter Playback mode. Mounted around the playback button are the stereo microphones.
On the far left of this photo is the G1 X Mark II's hot shoe, where you can add an external flash unit or an optional electronic viewfinder. The edge of the popup flash compartment is just visible in the left side of this photo.

Canon has included a powerful LCD touch screen with the PowerShot G1 X Mark II, measuring 3.0 inches diagonally. The LCD has a 3:2 aspect ratio with 1.04 million pixels of resolution.
The G1 X Mark II's LCD is tiltable upward to 180 degrees, meaning it can be seen from the front when fully tilted. You also can tilt the display screen at 90 degrees upward to make this camera easier to use when mounted to a tripod, or it can be tilted 45 degrees downward.

There are quite a few control buttons on the right side of the back panel of the Canon G1 X Mark II.
At the top of the panel is a rectangular button, through which you can connect wirelessly to mobile devices that have been registered with the camera.
Along the upper far right is the movie recording button. You'll start and stop video recording by pressing this button. Just below it is the Shortcut button (marked with an S), through which you can assign a specific camera function.
Just below those buttons is the MF button, where you'll be able to use manual focus with the G1 X Mark II. This button also serves to delete photos when in Playback mode. To the right is the AF Frame selector button, through which you also can filter your stored images in Playback mode.
With the PowerShot G1 X Mark II's four-way button you can select a number of pre-set features, as well as scroll through stored images and menu commands.
The upper portion of the four-way button sets the exposure value in advanced shooting modes and sets the Wi-Fi connection in Playback mode. The right portion of the four-way button is the flash command, the lower portion sets the ISO, and the left portion controls the macro function. Use the middle of the four-way button to make menu selections.
At the bottom of the panel is the Disp button, which changes the data displayed on the screen in shooting mode or in Playback mode. The Menu button in the lower right corner opens the camera's menu screens.

The camera's ports are on the right-hand side of the G1 X Mark II as you're holding it. The upper port is a remote terminal, while the middle port is the USB port. The camera's HDMI port is in the lower portion of the compartment.


Canon included a separate battery charger with this camera kit, which is great for charging one battery while using a second battery. The battery life is rated to about 240 shots per charge, which is a little low for a camera of such a large size.
The SD memory card slot and battery slot are both contained behind a hinged hard plastic door that locks in place with a toggle switch on the bottom of the camera.