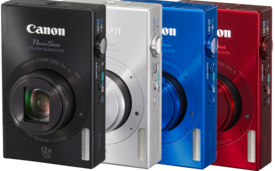 Canon continues to update their Digital ELPH line-up, and so far for 2012 they've added three new models; the ELPH 530 HS, ELPH 520 HS and the ELPH 110 HS. The 520 HS holds the middle spot in this series, offering a few advantages over the 110 HS, while still being slightly out gunned by the 530. Core features on the 520 include a fast 10-megapixel HS series CMOS image sensor, DIGIC 5 processor, full 1080p HD video recording, loads of easy to use exposure options (like Smart Auto); and most importantly, a 12x optical zoom lens. All of these features are packed into a classic ELPH body design, which is available in four stylish colors; Black, Silver, Red, and Blue.

When it comes to easy to use exposure options, the 520 delivers. While you have a plethora of Scene modes to choose form, along with an abundant amount of My Colors options to really spice up your photos, the 520's most impressive mode is Smart Auto. The 520 features an advanced version of Smart Auto, which now has access to over 58 unique scene settings to choose from as it analyzes the shot you are framing. Past models (and even many of the current A-series cameras) only offer 32 possible settings; which was impressive in itself. For those who like the option of having more advanced exposure settings at their disposal, the 520 also offers Program mode. This option allows you to take advantage of the AE (Auto Exposure) and AF (AutoFocus) systems, however now you have access to settings like ISO, White Balance, Focus mode, Light Metering, etc. That's about as advanced as you can get, as the 520 HS does not offer a full manual mode.

Like I mentioned earlier, the 520 HS has a classic Digital ELPH look and feel, thanks to its squared off body. The camera is what we consider an ultra-compact, meaning it can fit into just about any pocket or small handbag without any fuss. Measuring just 3.43 x 2.12 x 0.76 inches when powered down, the 520 HS is similar in size to a deck of cards. The back of the camera is dominated by a large 3.0-inch LCD screen. This leaves little space on the right for controls, and as soon as you pick up the 520 this is apparent. The controls that are located on the right side of the LCD are extremely small, and scrunched together in an uncomfortable manner. What's more is that the "4-way controller" is in a very tight group, with the FUNC./SET button being place right below the group; instead of in the middle. I found myself hitting the FUNC./SET button when wanting to press down on the 4-way often, which caused problems when navigating the menu; selecting settings I didn't want, etc. Using these controls is cumbersome at best. They would have been better off implementing a touch screen on this camera, because the rear controls are terrible. Beyond that, the controls on the top worked just fine, and we really like that the zoom controls are mounted around the shutter release.

The 3.0-inch LCD on the 520 HS is quite nice. With 461k dots, it offers outstanding resolution with good color reproduction and plenty of detail. Viewing the screen was a pleasure both indoors and out, and while the display gains up well, you have 5 levels of brightness to choose from in the setup menu. While it boasts an anti-reflective coating, there are still a few angles which reflect the sun, however we never had to cup the screen to see our subject out in bright sunlight. One negative about the screen is that it collects fingerprints; so you'll find yourself cleaning it often. The menu system is logically organized, and very familiar if you've owned a PowerShot camera before.

In our minds, the most impressive feature on the 520 HS is the 12x optical zoom lens. Canon claims this is the World's thinnest camera with a 12x optical zoom, with their own proprietary UA lens technology helping them accomplish this feat. UA technology combines molded glass elements with ultra-high refractive elements, which allows for a much more compact package. The 12x zoom on the 520 HS offers an effective zoom range of approx. 28 - 336mm (35mm equivalent), giving you the ability to frame subjects that other point-n-shoots only dream of. The 28mm wide angle extreme may not be the widest on the market, however it's plenty wide for group shots and nice landscapes. The telephoto magnification capabilities of the 520 not only help you tightly frame subjects for portraits or macro shots, but they also allow you to bring distant subjects up close and personal. While CA and other aberrations are well controlled, we saw a good amount of barrel distortion and pincushioning at both the wide angle and telephoto extremes, respectively.

When first looking at the photos the 520 HS captured during our testing, I was quite impressed. At full screen viewing on my 24" wide screen monitor, both our indoor and outdoor images look excellent. Exposure appears to be good and colors are very pleasing. We noticed that images are tack sharp throughout the zoom range, with little to no edge softness present. Contrast was also very good. However, zooming in to pixel level, or 100% revealed some unexpected results. We saw very high levels of imager noise, specifically luminous noise. This causes images to show strong speckling or graininess at this level. Although this was not something I excepted from the 520 due to it's "HS" system, I was surprised that image detail was still quite strong; which is a good thing. While this strong noise is something I want to point out, I want to make clear that at full screen these images look amazing. It's also not likely that you'll see this graininess in average sized prints. Putting the fact that this noise can be seen at the lowest of settings aside, noise levels stay pretty consistent all the way up to ISO 1600; which looks very usable in my opinion. This tells me that the HS system is doing it's job well, making the higher sensitivity setting usable. ISO 3200 shows a big shift in detail loss due to heavy noise reduction, however I think you could still get away with small prints using this setting.

Moving indoors, the 520 HS has a handicap; the built-in flash. Canon claims the flash has an effective range of up to 8.2 feet at wide angle, which is already below average to begin with. On top of this, we feel that's an exaggerated claim. During our testing, the built-in flash struggled indoors. Even when shooting just 4 feet away, using the zoom a bit to get a close-up of my daughter, the camera had to boost the ISO 800 in order to get a decent exposure. Shooting in Program mode with the ISO set to 100, the camera struggled to illuminate her face from just a few feet away, and barely lit up our M&M man scene. Luckily imager noise isn't terrible at ISO 800, so these images still look great on a PC screen. Another issue we ran into was Red-eye; which was common in our people shots. The camera does offer a red-eye correction option in both the record and playback menus however. While the built-in flash unit on a compact camera is typically weak, the 520's is pretty pathetic. Even less expensive PowerShot models, like the A4000 IS for example, have a much stronger flash.

When it comes to recording video, the tiny 520 HS does well. You have quite a few video options to choose from, including HD video at either Full 1080p or 720p resolutions, standard definition video at 640x480, and some unique options called Movie Digest, iFrame, and Super Slow Motion video. The latter was very fun to use, allowing us to shoot at either 120fps at VGA (640x480) resolution, or 240fps at QVGA (320x240). Both options play back at 30fps, giving you a super slow motion look. While the camera can record stereo sound, this function is not available in Super Slow Motion mode. Whether you're shooting full HD video, or using one of these unique movie modes, the 520 captures sharp video with good exposure and color. Sound is actually better than I expected, and the camera handled wind better than most we've worked with. Our helicopter clips were taken on a very wind day, not to mention we were underneath a helicopter; which creates quite the vortex. Even so, there are only some brief noises from the wind in our clips. The optical zoom is also available while recording which allowed us to really zoom in tight on the helicopter as it dropped plastic eggs for the kiddos to pick up during Easter. While the AF system does very well when zooming, be aware that you'll have to let it catch up for a brief second; which will cause the video to be blurry for a second or two. Overall, I was impressed with the 520's video results.

Battery life is another area where the 520 really lacks. Canon continued the use of one of their smallest Li-ion packs out there; the 870mAh NB-9L. This pack looks about the same size as a AAA battery stuffed inside a small cylindrical case. Canon claims you can get 190 shots on a single charge. I find this hard to believe, as we had to charge the 520's battery three times in order to complete our review. This consisted of about 175 still photos, a hand full of short videos, and extensive use of the menu and playback systems. We highly recommend you snag a spare pack with this one, especially since the pack is charged out of camera in the included AC charger.

One specification that is quite unique on the 520 HS (and the 530 HS), for a PowerShot camera anyway, is that it uses a microSD card slot; rather than a standard SD slot like most all of Canon's PowerShot models. To some, this may be a non-issue as they are accustomed to microSD cards thanks to their smart phone. I myself dislike using microSD cards in a camera for several reasons. For one, they are extremely small and easy to loose. With most smart phones or tablets, you insert the microSD card once, and it stays inside the device almost indefinitely. With most cameras, you are taking the card in and out often to transfer files to your PC using a card reader. With SD/SDHC/SDXC type cards, this is not a big deal as they are plenty large enough; while still being small enough for manufacturers to create small cameras. Secondly, if you already have an investment in SD cards, you'll be upset that they will not work with your new PowerShot; if you were to pick up the 520 or 530 HS that is.

Bottom Line - The Canon PowerShot ELPH 520 HS was a mixed bag. While the overall majority is that we liked the camera, it had more cons than we expect or like to see from a Canon camera. While at full screen resolution images look awesome, the graininess is worth noting and is likely to show up in large prints; especially if you've already cropped the photo. The built-in flash unit is one of the weakest out there, and the camera uses tiny microSD cards. That said, the 520 offers a zoom range that is not found on many cameras of this size, along with recording some great video, and offering excellent shooting performance. If you are sharing photos on Facebook and other social media sites, and you don't print huge photos, then the 520's image quality will please. With a MSRP of $299.99 USD, the ELPH 520 HS is not cheap. There are a lot of great models in this price range that you should consider.