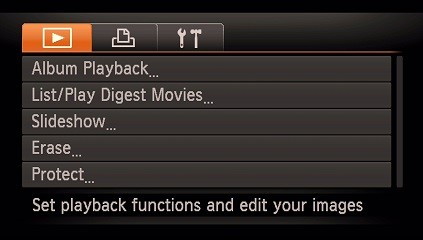 Press the Playback button on the back of the ELPH 360 to open Playback mode, where you can review photos and videos stored on the memory card.

When a still image is displayed on the LCD, press the Info button on the back of the camera to change the data shown on the screen. Three screen display options are available:

With a single image on the screen, press the Func/Set button to open a popup menu with a series of editing functions you can perform, including:
Canon gave the PowerShot ELPH 360 the ability to display thumbnail images of your stored photos and videos. With a single image displayed on the screen, press the zoom ring to the left to increase the number of thumbnails on the screen.
Because the A/V output of the ELPH 360 defaults to a 16:9 aspect ratio, the thumbnail grids shown here do not match the 4:3 aspect ratio of the camera's actual LCD screen. The actual grids options on the LCD screen are 3x2, 4x3, 6x6, and 10x10. When one of the thumbnails is highlighted, press the Func/Set button to bring the image to the full screen.
To magnify an image stored on the camera's memory card, press the zoom ring to the right. Ten levels of magnification are available. The white outlined box in the lower right corner represents the full size of the image, and the small white rectangle inside the box is equal to the current view on the screen.

With a video clip displayed on the screen, you can see the same type of data about the file that you could for still images, just by pressing the Info button.

To replay a movie that's displayed on the LCD, press the Func/Set button twice. Once the movie is playing, you can pause it by pressing Func/Set again. With the video paused, a series of icons will appear along the bottom of the screen, allowing you to control the movie. The icons are:

The PowerShot ELPH 360 HS includes an Album feature as part of the Playback mode. With an image or video displayed on the screen, press the up button on the four-way button to open the Album feature, where the options are:

Canon gave the ELPH 360 both Wi-Fi and NFC connectivity. To make a connection with another NFC device, touch the NFC mark (which is on the left side of the camera) to the mark on the other NFC-enabled device.

For Wi-Fi connectivity, press the Wi-Fi button on the back of the camera. You then can make a connection with another device through your Wi-Fi network.

The Print menu options are: