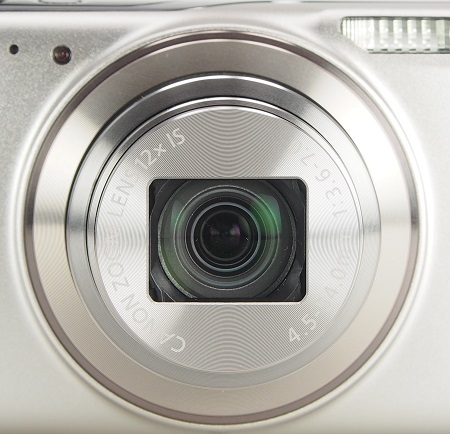 The ELPH 360 HS includes a 1/2.3-inch CMOS image sensor with 20.2MP of resolution. It's a small image sensor, equal in physical size to those typically included in inexpensive point-n-shoot cameras. So you wouldn't expect significantly above average image quality with an image sensor like this.
Canon installed the DIGIC 4+ image processor with this PowerShot model, which, again, is about what you'd expect in an inexpensive point-n-shoot camera. The DIGIC 4+ is a couple of generations behind the latest Canon image processors, and it probably explains the slow performance of the PowerShot ELPH 360 when making use of the built-in flash.
The HS in the ELPH 360's name refers to Canon's High Sensitivity (HS) system, meaning this camera is able to produce reasonably good image quality in low light situations ... even if it operates slowly.
The optical zoom lens is the star feature of the Canon ELPH 360. This camera has a 12x optical zoom setting (25 - 300 mm equivalent), which is a great feature of a camera that measures less than 1 inch in depth when powered down. It certainly isn't the largest optical zoom setting you'll find in the compact camera market, but the ELPH 360's lens holds its own in this segment of the market.
With the camera completely powered down, it measures about 1 inch in thickness. When you press the power button, the lens partially extends away from the camera, and the ELPH 360 measures about 1.75 inches in depth. With the zoom lens fully extended, the camera measures about 2.25 inches in thickness. The PowerShot 360's lens can run through its entire zoom lens in slightly less than 2 seconds.
The Canon ELPH 360's lens isn't particularly fast, as your maximum aperture setting is f/3.6 at the widest focal length setting and f/7 at the greatest telephoto setting. The autofocus range for the PowerShot ELPH 360 is:
The tiny embedded flash is located in the upper right corner of the front of the Canon PowerShot ELPH 360 HS. It's extremely small, and because of the design of the camera's lens housing, the lower left corner of the flash is cut off, further shrinking the physical size of this flash unit. There's no option for adding an external flash to the ELPH 360, so you're stuck with this embedded flash. You may notice some vignetting in your flash photos, depending on the angle of the camera to the scene, as the extension of the camera's zoom lens may block some of the light from the flash.
When shooting in Program mode, the flash modes you can use with the built-in flash are: Auto, Flash On, Flash Off, and Slow Synchro. If you're shooting in Auto mode, you're limited to Auto and Off. To see these options in a popup menu, you'll press the right side of the four-way button. As with many other aspects of this camera, the flash range for the PowerShot ELPH 360 HS is no better than average at:

As with most point-n-shoot cameras, the number of control buttons on the top panel of the ELPH 360 is minimal. The tiny power button is labeled with On/Off. The shutter button is surrounded by a silver zoom ring.
On the far right is a toggle switch that allows you to access a couple of odd shooting modes. The left setting of the toggle is for normal shooting modes.
The middle setting activates Creative Shot mode, where the camera will automatically apply special effects to the scene and record six photos with one shutter press. You can pick from a family of special effects, including: Auto, Retro, Monochrome, Special, or Natural.
The far right setting activates Hybrid Auto shooting mode, where the camera will store video clip of a couple of seconds before you press the shutter button to shoot a still image. In other words, the camera is constantly recording video, but it only saves a short clip if you take a still image by pressing the shutter button.
I don't know how useful either of these special effect modes are. I've tested them a few times, and haven't really found a good reason to ever want to shoot in either mode, as they both really take control of the scene away from you. Other special effects give you a bit more control. Either way, I think Canon could have placed these features inside the on screen popup menu where the other special effect settings are available, just to avoid confusion.
The PowerShot 360 HS has a 3.0-inch LCD screen (measured diagonally) that contains 461,000 pixels of resolution. It's a good display screen to find on a camera in this price range. It suffers from glare occasionally when shooting in bright sunlight, but you can easily fix this problem by increasing the screen's brightness level.
Unfortunately, it's not a touch screen, and it cannot swivel or twist away from the camera in any way.

Canon gave the ELPH 360 a simple set of control buttons on the right side of the back of the camera.
The two upper buttons are the Playback button on the left, used to view your photos stored on the memory card, and the movie recording button on the right, used to start and stop video recording.
The four-way button in the middle allows you to move through menu settings. While in shooting modes, you can use the edges of the four-way button to open popup menus for specific features, which are:
When you press the Func/Set button in the middle of the four-way button, you'll open a popup menu that contains shortcuts to camera settings, which is a great feature. Or you'll use the Func/Set button to make a menu selection, just like an OK button.
Along the bottom are the Wi-Fi connection button on the left and the Menu button on the right.

Along the right side of the PowerShot 360 is the flexible plastic covering on a soft plastic hinge for the camera's ports. You'll pull this covering away from the camera to see the USB port on the top and the HDMI port on the button.

As with most Canon point-n-shoot models, the battery and memory card compartments are in the bottom of the camera. There's a hard plastic hinged door on the bottom of the camera to protect the compartment. Slide the door outward and then swing it open on the hinge. The ELPH 360 uses SD-sized memory cards.
The thin battery with this camera doesn't last long, as Canon estimates you can shoot 180 photos per charge. My tests showed that number was close to accurate, as I received about 155-175 shots per charge.
The separate battery charger included with the PowerShot ELPH 360 HS is a nice feature. Canon did not include a USB cable with this camera kit.