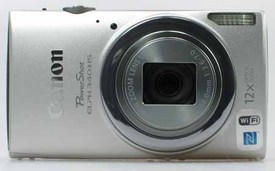 The Canon PowerShot ELPH 340 HS is a slim and powerful point-and-shoot that aims to make your life easy, yet deliver creative and attractive shots. The camera offers a powerful 12X optical zoom lens with a wide angle of 25mm (35mm film equivalent). That gives you room to capture broad vistas, yet zoom in on distant subjects.

The 16-megapixel camera is compact and pocketable, cramming its 12X zoom lens into a body less less than 1 inch thick (0.88 inch). The brick-like body has no contours or grip pads, so one-handed operation can feel a little dicey at times - especially considering that the chassis feels a little fragile and plasticky. It fits comfortably in the hand, however, and most buttons fall comfortably under the thumb when operating the camera one-handed.

The camera can record full high-definition video (1920 x 1280) and offers an interesting mode called hybrid Auto, which records a 2- to 4-second video before snapping a still image (which plays back the same way, playing a shutter click sound when the photo appears). This mode is easily reached by a three-position switch atop the camera, beside the shutter button.

The second position of this switch is for Creative Shot - in this mode, the camera snaps three frames but creates six varied interpretations of them. In some cases the difference is in color treatment or lens effect, but also includes different cropping its of the images. It's an innovative way to quickly deliver a surprising and - most of the time - attractive alternative to a basic snapshot. I found this mode very fun and entertaining to use, getting retro and artsy versions of the same shot, without having to spend any time in front of a computer using image editing software. Over time, however, the surprise may wear off. I found myself thinking of the results as a little predictable over time - and wishing I could manipulate the effect. But with the dedicated Wi-Fi button on camera's back panel, you can share these little creations right away using NFC (near field communication), sending them to a friend's smartphone or compatible Wi-Fi enabled camera.

The camera also can send images to Web services, a computer, or a printer, of course. You have to configure the phone on a network via WPS-compatible access point to communicate with these devices; a smart phone may be accessed directly, using the camera as an access point. Pressing the mobile device connection button (with a smart phone icon) launches the Wi-Fi setup process. NFC-compatible Android smart phones running OS 4.0 or later can be connected, using the CameraWindow app on the phone.

The 12X optical zoom gives you a lot of power for zooming in on far-a way subjects. In broad daylight, this tool cannot be beat, and our examples on the Samples Page show it. Even at full zoom in bright light, shots are quite sharp, aided by the optical image stabilization. However, when indoors, the small maximum aperture at full telephoto can be limiting. Add wide angle, the maximum aperture of f/3.6 is usually fast enough to freeze moderately fast action. But the maximum aperture of f/7.0 at telephoto can be too slow to freeze movement at a distance, especially when hand-holding the camera (as almost everybody does). For example, when shooting at an indoor soccer field, at full telephoto I ended up with quite a few blurry shots, and wished I had a tripod. Even with the ISO at 1600, the camera often used a shutter speed no faster than 1/40 second.

Overall image quality from this compact camera is very good. Even in low light -- often the downfall of budget cameras - the ELPH 340 HS and its 1/2.3-inch CMOS sensor perform very well. That is, when isolating digital artifacts with the camera mounted on a tripod (see Sample Photos page) versus hand holding the camera, which also involves the optical image stabilization. In my testing, while the camera performed well indoors at wide-angle, delivering attractive images even at high ISO settings, using the extremes of its telephoto lens resulted in quite a few blurry shots due to the restricted aperture.

High-definition video captured in broad daylight looked very sharp and attractive. But I ran into artifacts when shooting in shade in late afternoon light (see Samples Page). In video shot in shadow, the quality is marred by dancing digital artifacts. Given the camera's high quality in other areas, I was surprised at the amount of artifacts in late afternoon shadow; I expect them at dusk and later, but there was quite a bit of ambient light in the shade where I was recording.

The autofocus is quick and works very well. Continuous AF is turned on by default, and I had to turn it off in order to measure of the lag time without pre-focus in our timing test. In general, the autofocus is fairly quick for a point-and-shoot camera when shooting stills. When recording movies, it was also generally accurate, though quick movements were difficult for it to track, and in shade it was a little slower to adjust to changing focal length.

The flash on this camera is tiny, and does not throw around a lot of light. At wide-angle, I noticed a significant drop off just north of 10 feet. When zoomed in moderately on a subject at roughly 15 feet, the camera did a good job of illuminating the shot. But you will run up against its limit if you are zoomed in on a subject, say, 20 feet away and having to fire the flash to adequately capture it. The specifications describe the flash as having a range up to 13 feet at wide angle, and 3.3 to 6.6 feet at telephoto.

The scene mode assortment is run-of-the mill beyond the Hybrid Auto and Creative Shot modes. There are 18 in all, including Handheld Night Scene, Low Light, Fisheye Effect, Miniature Effect, and Super Vivid. There is no aperture-priority or shutter-priority mode, so shooters looking for manual controls should go elsewhere. Also, the camera only captures JPEGs, with no RAW capture option; which is common for cameras in this price range.

The highlight in this department is the photo effects (My Colors), with 12 options when shooting in Program mode. In addition to Vivid (which is also included as a scene mode, as just described), you get effects such as Sepia, Positive Film, and Darker Skin Tone to subtly tweak the color in your shots. You also can make blues, greens or reds more vivid - all of these can also be applied in playback mode as an edit. One additional setting you can't use in playback mode is Custom Color, which allows you to adjust contrast, sharpness, saturation, red, green, blue and skin tone individually.

There is a Smart Shutter feature that offers three options: Trip the shutter when a smile, a wink, or a new face is detected. In this mode you can set the camera to take anywhere from one to 10 shots. It's like having your own tiny, portable photo booth in the age of the selfie.

In these days of rampant Wi-Fi it is not entirely surprising that this camera does not come with a USB cable. Just be forewarned that if you don't already have a Canon USB cable lying around, you may need to pick one up (after all, using wireless will drain your camera's battery while USB can power and charge the battery). Similarly, an HDMI cable is optional. One other note: though this camera offers wireless capabilities, it does not include GPS functions.

Capturing fast action is not this camera's strong suit - that is, not at full resolution. I clocked the burst mode recording 16MP files at 2.8fps, which feels sluggish when trying to capture sports action. The high-speed burst mode shot at 5.9fps, which was a big improvement for snapping sports activity, but in this mode the camera captures 4MP images.

In both modes, the camera slows down slightly over time, but the lag is admirably minimal. For example, in standard burst mode, the 2.8fps speed achieved in the first 10 images only slows down to 2.5fps over the course of 25 frames. Similarly, the high-speed burst mode captured 10 shots in just 1.7 second, and continues at a rapid clip - even at 50 shots still averaging 5.3fps, compared to 5.9fps out of the gate. One plus is that continuous auto focus is on by default, which will help keep shutter lag to a minimum. You can see the difference in our timing tests results - in order for me to measure the shutter lag without previously focusing the camera I had to go into the settings and turn off continuous AF.

Battery life is not one of this camera's strong suits. That is, according to the specifications. Unfortunately, it is difficult to know how comparable Canon's battery life specifications are to other makers' cameras, because the company uses its own testing method, which is not explained in the online specifications. Many camera makers use the CIPA standard, which measures battery life with half of the photos taken with flash. So, not knowing this vital statistic, it's difficult to know how disappointing the company's rating of 190 shots is. More acceptable is the 280 shots estimated if eco-mode is turned on (not the default). Taking all that for what it's worth, my personal experience was outstanding - I was able to record a total of 718 still images and 14 short videos on a single battery charge. Even taking into account that few of these were taken with a flash, and many taken in burst mode, I found in the camera's battery life impressive.

Bottom line - The PowerShot ELPH 340 HS offers a lot of power and convenience for casual shooters. Easy Wi-Fi, a powerful zoom lens, and the attractive results of Creative Shot mode will please most people. You'll get high image quality in most cases, as long as you avoid maxing out the zoom lens in low light and shoot most of your movies in bright daytime situations. If you don't need manual controls, and those trade-offs don't deter you, this compact ELPH is likely to put in a big performance.