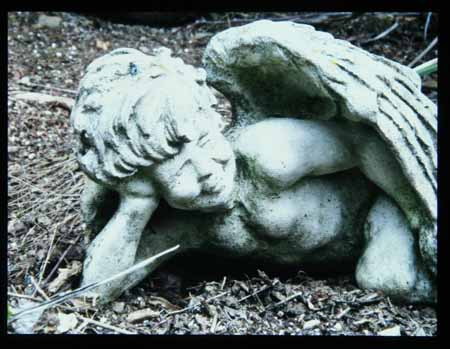 There are three display views in playback mode. Shown here, obviously, is the no-information display. If this is the last display view you used, it will be the first one shown the next time you enter playback.

You change the display view with the four-way control, pressing downward to switch to the next information view.

Basic file information appears in the following display view, such as folder and file number at top right, and date/time at bottom right. In the lower left corner is the resolution - in this case superfine compression at large (16 megapixels, 4608 x 3456 pixels).


Another press of the display position (downward) on the four-way control reduces the size of the image to make room for camera settings data, such as (left to right) shooting mode (P), metering mode, shutter speed, ISO, aperture and exposure compensation. A histogram is included below the preview image.


Images can be magnified substantially (up to about 10X) in playback mode (compare this partially magnified view to the whole image at the top of this page). You can view a series of magnified images by moving through your photos with the left/right buttons on the four-way control.


At full magnification, you get a very up-close view for inspecting fine details and focus. You can jump back to viewing the entire image by pressing the Menu button (as indicated by the icon in the lower right corner).


Pressing leftward on the zoom ring brings up a six-thumbnail index view.


Another press leftward on the zoom ring doubles the number of on-screen thumbnail previews.

The next index view includes 36 thumbnails.

A fourth press leftward on the zoom ring multiplies the number of thumbnails to 100. At this tiny size, though the LCD resolution is a modest 461,000 dots, you can make out enough detail usually to get you in the ballpark of a photo series, even if you can't distinguish the subtle differences in individual frames.


The camera offers a typical list of playback features, such as the ability to tag photos as a favorite and look up images by shot date. You can play back only images with faces detected and choose to only look at photos, movies, or those taken in hybrid Auto mode, which records a 2- to 4-second movie clip preceding a still image.

If you like to randomly flip through photos, but want a little control over what turns up, you'll like the Smart Shuffle feature. You launch this feature from the Function menu.

When you launch Smart Shuffle, four smaller thumbnails spin their way down the screen, like a card dealer tossing you your next hand. You use the four-way control to select which thumbnail should be enlarged and take center stage, and the camera deals you four new thumbnails to choose from.

While I enjoy the way this feature looks, I had a hard time figuring out exactly how "smart" it is. In many cases it did not seem any smarter than just a random shuffle - for example, offering up photos of live soccer action that were in no way similar to my shot of a small garden statue.


This ELPH camera doesn't offer loads of editing options, such as fancy effects. You can crop, rotate, adjust the i-Contrast level, and correct red eye. Beyond that, there is the subtle and wide-ranging My Colors menu. This menu is identical to the My Colors menu in shooting mode, except it does not include the last, and very adjustable, option: Custom Color.

You can play back movies with no on-screen information.

Another press of the display position on the four-way control adds movie file information such as evaluative metering, resolution, exposure compensation and white balance. Plus, a histogram.

After beginning playback, pressing the Function/Set button will pause the video, and playback controls appear along the bottom of the screen. You can't do anything fancy as far as editing movies. But you can trim the footage from the beginning or the end. To do so, you navigate to the far right icon (the scissors) and press Func/Set. This launches an edit menu - you nudge a cursor frame by frame along a bar to trim the beginning and end of the footage.