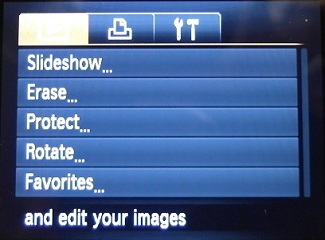 Please excuse the poor quality of these screen captures. The ELPH 330 HS kit does not include an AV output cable, therefore we had to photograph the display screen.

To enter Playback mode with the Canon PowerShot ELPH 330 HS, just press the Playback button on the back of the camera.

With an image on the screen, you'll see some basic information about it, including the file number in the upper right, the resolution in the lower left, and the time and date the image was shot in the lower right.

Press the Disp button on the back of the camera to change the information displayed on the screen. You'll see a detailed screen where the image shrinks to fill the upper left corner. The lower left includes a histogram for the image, while the far right has (from top to bottom) the file number, shooting mode, shutter speed, ISO setting, aperture setting, exposure value, white balance, file size, resolution, time, and date.

You can play movies using the PowerShot ELPH 330's LCD screen while in Playback mode, too. With a movie on the screen, press the Func/Set button twice to begin playing it. You also can see data about the movie by pressing the Disp button with the movie displayed on the screen.

When you're in Playback mode, you can activate the ELPH 330's Wi-Fi mode, allowing you to share images with a variety of devices. Just press the upper button of the four-way button while in Playback mode to open the primary Wi-Fi- menu screen that contains five icons.
Once you pick a device to connect to, you'll be asked to pick the Wi-Fi network you want to use to make the connection. You may need to give your Canon ELPH 330 HS camera a nickname to use on the network, and you may need to enter a network password before you can connect. As the camera makes the connection, you'll see messages on the screen updating you on the progress.
The overall process of setting up Wi-Fi can be a little tricky with the ELPH 330, unless you have a bit of experience with making Wi-Fi network connections.

Press the Menu button in Playback mode to open the Playback menu, which gives you control over the images stored on the camera's memory card. The Playback menu is available when you highlight the left tab marked with the Play icon.

The Print menu is in the middle tab on the Playback menu and it's marked with a printer icon. Highlight the Print tab to see the menu options, which include:
The Setup menu is available on the far right tab, marked with a tools icon.