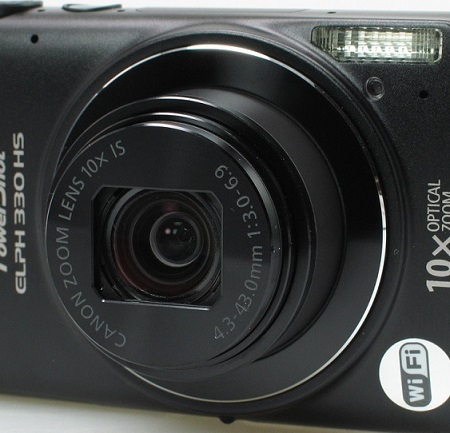 Canon has included a 10x optical zoom lens (24 - 240 mm) with the PowerShot ELPH 330 HS, which is a nice telephoto measurement to find in such a thin camera that measures just 0.89 inches in thickness. When you press the power button, the lens extends slightly away from the camera body, making the ELPH 330 measure just shy of 2 inches in thickness. When the 10x zoom is fully extended, this camera measures almost 3 inches in thickness.
The ELPH 330 HS can move through the entire 10x zoom in about 2 seconds when shooting still images, which is a fast performance. To keep the image in focus while shooting a movie, the zoom lens moves much slower, requiring about 7.5 seconds to travel through the entire 10x range.
The inclusion of a CMOS image sensor with this camera gives it pretty good low light performance. The PowerShot ELPH 330 has a 12.1 megapixel 1/2.3-inch image sensor, and this is a typical image sensor size for a beginner-level camera. Such small image sensors typically don't produce photos that can be printed sharply at large sizes.
This camera's lens has a maximum aperture of f/3.0 to f/6.9, and Canon included intelligent IS technology with this model. Canon uses a through the lens autofocus system with the PowerShot ELPH 330 HS.
Focus Range:
As with most PowerShot ELPH cameras, the ELPH 330 retracts the lens completely inside the camera when powering down, and a panel automatically moves in front of the lens glass to protect it.

As you can see from the photo here, Canon really had to compromise on the size of the built-in flash unit to fit it in the upper right corner of the PowerShot ELPH 330. The lower left corner of the flash unit is lost to accommodate the size of the lens housing. Although this isn't a huge problem with most flash photos, you sometimes may notice a bit of vignetting, depending on the angles between the flash, the lens, and the subject. When holding this camera with two hands, you have to be careful that the fingers on your left hand don't block the flash.
Focus Range:
Depending on the mode your shooting with, the PowerShot ELPH 330 HS changes its options for using the flash. In Program shooting mode, the ELPH 330 offers four different flash modes: Auto, On, Slow Synchro, and Off. If you're using a basic Auto shooting mode, you'll have only two flash options available: Auto and Off.
The top panel of the ELPH 330 HS is pretty basic. The rectangle on the left is the camera's Wi-Fi antenna, allowing you to make a wireless connection with a Wi-Fi network. This panel doesn't open at any point.
The power (On/Off) button is of a good size, and it is very responsive. The shutter button is on the far right of the top panel, and it's surrounded by the zoom ring.
The buttons are in a good location and of a good size to allow you to operate the camera one-handed, although there is no raised area on the front of the camera to serve as a right-hand grip.
Canon included a sharp LCD screen with the ELPH 330 HS, offering 461,000 pixels on a 3.0-inch screen. However, the LCD screen does suffer from some glare issues, as is noticeable in the photo shown here. You can select from five brightness levels with this camera, which allows you to combat some of the problems with glare.

As with most PowerShot ELPH cameras, the 330 HS is very easy to use. There's no need to include a mode dial with this model, as the two-way toggle switch in the upper right corner of the back panel allows you to pick the primary shooting mode.
Slide the toggle switch up to the green "A" icon to use Hybrid Auto mode, in which the ELPH 330 HS will record a short movie clip of a few seconds before and after you shoot each still image. This feature only works if you aim at the subject for a few seconds before you shoot the image, but it can be a nice feature if you decide as you're shooting a still image that it would make a good movie clip.
Most of the time, though, you'll have the toggle switch in the downward position (white camera icon). This leads to the primary shooting modes, which you'll access by pressing the Func/Set button.
To the left of the toggle switch is the movie recording button (marked with a red dot). You will start and stop movie recording with this button.
The four-way switch is in the middle portion of this image. The upper part of the four-way button controls exposure value in a shooting mode and the Wi-Fi connection in Playback mode. On the right side of the four-way button is the flash mode, the display control is on the bottom, and macro mode controls are on the left side.
The Playback button is in the lower left, through which you can see the images you've previously shot. The Menu button opens the camera's control menus from any shooting or Playback mode.
These buttons are really small and all are too tight to the body of the camera, which makes it difficult to press them comfortably. The important four-way and Func/Set buttons are especially tight to the camera, and anyone with larger fingers will have a hard time making these buttons work well, especially if he or she is in a hurry.


The right side of the Canon PowerShot ELPH 330 has a large flexible hinged covering that occupies most of the camera's side. The covering protects both the ELPH 330's HDMI and USB ports. Canon did not include an HDMI cable with the ELPH 330 kit, but this can be a handy way of downloading the camera's 1080p HD movies more quickly.
Canon did at least include a USB cable with this camera, which is something this particular manufacturer is leaving out of the box for many of its low-priced cameras for some reason.


This thin battery pack is only rated for about 220 photos per charge, and my tests found that number was pretty accurate. However, if you choose to use the PowerShot ELPH 330's Wi-Fi feature quite a bit, you're going to drain this battery much more quickly.
Canon provided a separate battery charger with the ELPH 330 HS, which is nice to have. It's much more convenient to charge the battery with a charger than inside the camera's body, especially if you choose to purchase a second battery.
The ELPH 330 makes use of SD size memory cards, and both the memory card slot and the battery slot are behind a hard plastic hinged door on the bottom of the camera body. The PowerShot ELPH 330 HS only weighs a little more than 5 ounces with the battery and memory card installed, but it has a well-built feel.