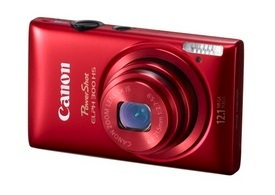 The 300 HS is (as of 3/15/2011) the World's thinnest digital camera with an ultra wide-angle 24mm lens. As little as a cell phone, the 300 HS is a great compact camera, in fact, it's one of the smallest in the PoweShot line. This is a simple to use point-n-shoot that is loaded with fully automatic exposure programs to let anyone pick it up and start capturing pleasing snapshots. With a Smart Auto exposure mode, the camera will intelligently select from one of the 32 shooting scenes for you, therefore all you have to do is concentrate on framing the picture at hand. For those who do like to have a bit more control, the 300 HS offers Program mode with access to more advanced settings like ISO, white balance, exposure compensation, etc. From here, you can also manually select one of 23 scene modes to fit the needs of the specific situation you are shooting.

While the control layout and body design are very similar to past ELPH models, Canon has made a few slight changes, like the addition of a red Movie Record button on the back, which allows for instant video capture not matter what mode you are in. The 2011 PowerShot cameras continue to have the look and feel of classic ELPH models, sporting stylish and sleek exteriors, while giving off a well-built feel thanks to their partial metal construction; Canon even uses a metal tri-pod mount on the 300 HS. The 300 HS also comes in a variety of different colors (Red, Black, and Silver), allowing you to match it to your own personal style. Overall, it was a pleasure to carry the 300 HS with me for the past few weeks, with it easily slipping into my pants pocket and taking up less space than my Motorola Droid smartphone. The only issue I had with the 300's build quality was with the lens bezel. I noticed some very small "dents" in the multiple bezels that encase the zoom lens, which more than likely occurred while in my pocket. While they never effected the operation of the lens, they did raise some concern.

Although this is an ultra-compact camera, the controls are large enough for comfortable operation, and each button or switch is placed in an easy to reach position. The inclusion of a Movie record button is appreciated, and we're glad to see the zoom controls are still mounted around the shutter release; which we feel offers the most comfortable zooming operation. The 300 HS retains the typical PowerShot menu interface, which will make those who've owned a Canon model in the past feel right at home. For new customers, you will find that the menu system is logically organized, with most of the commonly used settings being available in the Function shortcut menu.

The 300 HS comes equipped with a 2.7-inch LCD display. While not quite as large as your typical point-n-shoot's viewfinder, the screen allows you to easily see the subject(s) at hand, with a decent picture. While the resolution is only 230K pixels, because it's a smaller display the live image looks relatively good. I would have liked to see Canon incorporate a larger display, especially since there is space on the back as the protective covering is larger than the actual screen, which makes the LCD look like a 3.0-inch. However, this unit worked fine during our tests, with a bright backlight outdoors, which gains up nicely in marginal conditions too.

Like all of their new HS series PowerShots, Canon equipped the 300 HS with a CMOS type image sensor, compared to the CCD unit found in most digicams. This is a backside-illuminated sensor, which offers increased sensitivity performance, speed, and lower power consumption. Canon has paired this unit with a nice 5x optical zoom lens, which boasts a faster than average maximum aperture range of F/2.7 - 5.9 (wide - telephoto). Covering a 35mm equivalent zoom range of 24 - 120mm, the 300 HS can perform well in various situations. The wide angle extremes are great for indoor photography, especially in cramped spaces, not to mention work great for vast landscapes and large group shots. The telephoto capabilities won't zoom across the basketball court, however they will help you tightly frame your portrait or close-up subjects. Image quality from the above combination was pleasing for a camera of this size. The auto exposure system did well in most lighting, producing acceptable exposures. Colors are very pleasant, especially when using Smart Auto mode. Like many digicams, it produces a brighter image with increased saturation when compared to running with Program mode instead. Either way, the camera is able to produce a nice sharp image with plenty of fine details. When zooming in to 100% for critical inspection, you will see very little edge softness along the left and right hand sides of the frame. We also saw a few traces of purple fringing along edges that had extreme contrast (which is common). Overall, I was pleased with the performance of this sensor/lens combo outdoors.

Moving indoors, we saw similar results. Images are relatively sharp, and the flash does well when using the Auto setting with the ISO set to Auto as well. Just remember that the flash is tiny, so do not expect to illuminate a large group or room, especially if you are using the zoom at all. Red-eye was well controlled, with very few instances in our people photos. When the camera, or you, choose a higher sensitivity setting, the 300 HS is able to produce a usable image right on up to 3200 in my humble opinion. While the best quality will be had at ISO 800 and below, the 1600 and 3200 settings still retain a good amount of detail. When viewed at fullscreen resolution (typically between 20-25%), they look pretty darn good. Obviously, the amount of light on the scene will effect the outcome, but our M&M man photos look very good, which are under typical overhead fluorescent lighting.

For 2011, Canon has upped the ante on video, with their new ELPH HS models sporting full HD capabilities. You now have resolution settings of 1920x1080 (24fps), 1280x720 (30fps), 640x480 (30fps), and 320x240 (30fps). Video is recorded with sound (depending on mode used), and you have full use of the optical zoom lens. While recording, the zoom moves very slow to help keep noise down and allow the AF system to keep everything in focus: which it did well for this type of camera. Canon has also added some new modes to keep things fun. On top of the Color Swap and Color Accent options of old, the camera will now apply most all of the scene mode effects to your video too. So, if you are shooting in Monochrome mode and decide to start filming, your video will also be in monochrome. Some settings do not work, like Fisheye for example. Along with this new functionality, there's also two new movie mode options for you to choose from; Super Slow-motion and Movie Digest. With all of these features, the 300 HS offers some of the most impressive video options in a compact camera date (03/15/2011). When using the Full 1080p setting, the 24fps frame rate offers a cinematic look, which played back smoothly on my PC. Because the 300 HS has an HDMI port, you can easily connect it to your HDTV; with the optional cable of course. Overall, I was very pleased with the video quality from this tiny little camera, which rivals that of most compact cameras on the market; just don't expect digital camcorder quality and you'll be very happy.

The 300 HS uses the same tiny NB-4L, 3.7V 760mAh battery pack found in its predecessor, the SD940. Canon still claims the pack can power the camera for up to 220 photos using CIPA Standard testing methods (flash 50% of the time). You should have no problem capturing at least 220 photos on a single charge, and even more if you're outdoors where the flash is not needed as much. We captured over 220 photos, along with extensive use of the menu and playback functions before having to recharge the pack in order to complete our review. As always, we highly recommend you pick up a spare pack if the budget allows. Since the battery is charged out of camera in the handy AC charger, you can always have a fresh pack on standby.

Bottom Line - The PowerShot ELPH 300 HS is one awesome little ultra-compact. This model builds off of two of my favorite Canon pocket cameras (the SD780 and SD940), with much appreciated improvements in both the still image and video categories. With speedy performance, excellent image quality, awesome low-light performance, and pleasing full HD video, the 300 HS is tough to beat. Not to mention it retails for only $250 US or less.