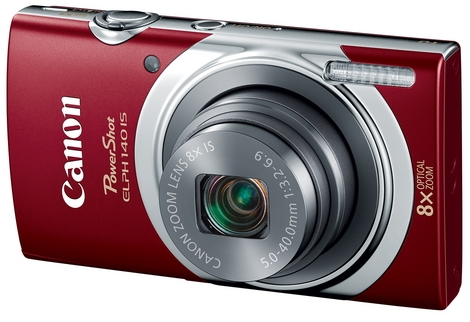 Canon has announced three new PowerShot ELPH-series cameras for spring 2014. All three models include the DIGIC 4+ image processor, 720p HD video recording, and a 3.0-inch LCD display. Since they're all family-friendly cameras designed for beginners, you will also find Smart AUTO Mode, which selects optimal settings for current shooting conditions; ECO Mode, which dims (or turns off the LCD) to reduce battery consumption; and a Help Button, which helps newer users learn more about their camera's functions, settings, and features.
The PowerShot ELPH 140 IS is the middle-price camera, costing $10 more than the ELPH 135, and $20 less than the ELPH 150 IS. The ELPH 140 IS includes the same 16.0-megapixel CCD image sensor and 8x optical zoom lens as the ELPH 135, but that extra ten bucks gets you Intelligent IS (image stabilization) to reduce camera shake during heavy zooming and video recording. For $20 more, the ELPH 150 IS has a larger image sensor and a longer zoom range. But, for my two pennies, adding more megapixels at this price point and image sensor size can only hurt your image. For that reason, the ELPH 140 IS looks like the best of the new 2014 bunch.
Canon PowerShot ELPH 140 IS Features:
Canon's PowerShot ELPH 140 IS will be available in February (2014), in gray and red, with an estimated MSRP $129.99.
Additional Product View