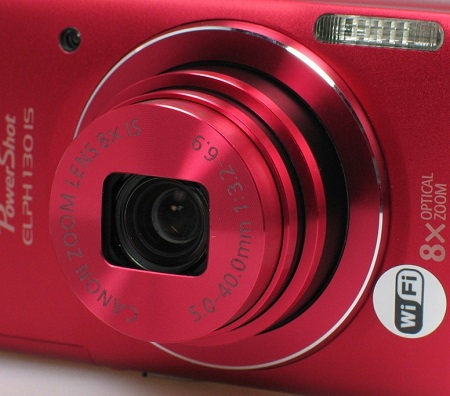 It's nice to find an 8x optical zoom lens in the PowerShot ELPH 130's small camera body. The ELPH 130 measures only 0.81 inches in thickness. When the camera is turned on and the lens is at its wide-angle setting, the camera and extended lens measure about 1.5 inches in thickness. When you are using the full zoom, the camera's overall thickness is just over 2 inches.
The zoom motor moves quickly, advancing through the entire zoom range in a little more than 1 second. However, the camera doesn't have enough of a hitch or pause between the optical and digital zoom settings. This makes it very easy to advance into the digital zoom range, which won't produce images as sharp as they are with optical zoom only. When shooting movies, the zoom lens has the opposite problem, moving too slowly, requiring nearly 8 seconds to advance through the full 8x range. The lens likely moves slower to allow the autofocus system to keep up.
As with most of its point-n-shoot cameras, Canon has included a 1/2.3-inch CCD image sensor with this model, which means that its low light performance won't be quite as good as a camera with a CMOS image sensor.
Canon uses a through the lens autofocus system with the ELPH 130.
Focus Range:
When the ELPH 130 IS is powered down, the lens retracts completely inside the camera and the front glass is protected by a panel that automatically closes when the power button is pressed. Canon also included optical image stabilization technology with the PowerShot ELPH 130 IS -- hence the "IS" that's included as part of this camera's name. This camera's maximum lens aperture is f/3.2 (wide angle) and f/6.9 (telephoto).

The ELPH 130's built-in flash is in the upper right corner of the front of the camera. You do have to take some care that you don't block the flash with the fingers on your left hand as you're holding and using this PowerShot model.
The flash range for this camera is 1.6 to 11 feet at wide-angle settings and 4.3 to 5.6 feet at telephoto settings. There is no flash exposure compensation setting.
If you're shooting in Program mode, you'll have access to four flash settings: Auto, On, Slow Synchro, and Off. In Auto mode, you'll have only two of those options available: Auto and Off.

Like most beginner-level PowerShot models, the ELPH 130 IS doesn't have a lot of controls on the top panel of the camera. The On/Off button is in the middle of the top panel, while the shutter button is just to the right. The zoom ring surrounds the shutter button. There are no buttons on the left side of the top panel.
Both of these buttons are a good size for comfortable usage, and the power button is depressed just a little bit so that you probably won't accidentally press it when adjusting your grip on the camera.

The one area where Canon did not skimp with the PowerShot ELPH 130 is in its LCD screen. This 3.0-inch LCD has 461,000 pixels of resolution, which is more than most cameras in the sub-$200 price range. It's a very sharp and bright LCD screen. Glare isn't a significant problem with the ELPH 130, which is unusual among point-n-shoot cameras at this price point. You can adjust the LCD's brightness to the brightest of five settings if you find that glare is causing an issue.

Canon really worked to make the ELPH 130 as easy to use as possible. The camera's two modes are controlled by the toggle switch in the upper left corner of the back panel. To shoot in full Auto mode, slide the toggle switch up. To shoot in Program mode, which gives you a little bit of control over the image, slide the toggle switch down (as shown here). It's extremely basic, and no other modes are available, not even a specific movie recording mode.
To the lower left of the mode toggle switch is the dedicated movie button, through which you start and stop movies.
The four-way button is in the middle of the right side of the camera's back panel, and it surrounds the Func/Set button. The upper portion of the four-way button controls the exposure value and opens the Wi-Fi menu, but only after you've installed the necessary software on your computer. The right side brings up the flash popup menu, while the left side calls up the focus popup menu, including macro mode. On the bottom portion of the four-way button (Disp), you can change the data displayed on the screen.
In the lower left is the playback button, which opens Playback mode. In the lower right is the menu button to open the camera's various on-screen menus.
These buttons are painfully small and all are too tight to the body of the camera, which makes it very difficult to press them comfortably. The four-way button is especially poorly designed, as the Func/Set button is too small and too tight to the four-way button, making it tough to press this important button.

Along the right side of the camera, as you're holding it, you'll find a USB port behind a flexible hinged covering that snaps into place. There is no HDMI port with this camera, which is pretty typical for a sub-$200 point-n-shoot camera. Because the ELPH 130 can shoot at a maximum 720p HD video resolution, an HDMI port probably isn't really necessary.


With a thin, lightweight camera body, it's no surprise to see that Canon included a small and thin battery with the PowerShot ELPH 130. Canon estimates that you can shoot about 190 photos per battery charge with this camera, and my tests show that number is pretty accurate under average usage. Unfortunately, that's a pretty poor battery lifespan for a digital camera, and turning up the brightness on the LCD screen will drain the battery much more quickly.
Some cameras in this price range don't have a separate battery charger, but Canon did include one with the ELPH 130, which is a great option for those who like to have a second battery available. You then can shoot with one battery while charging the other one.
Both the memory card and the battery are enclosed behind a hard plastic hinged door on the camera's bottom panel. This door slides and locks into place with an audible click. The PowerShot ELPH 130 will work with SD, SDHC, or SDXC memory cards. For a thin and lightweight camera, this model has a very sturdy feel to it.