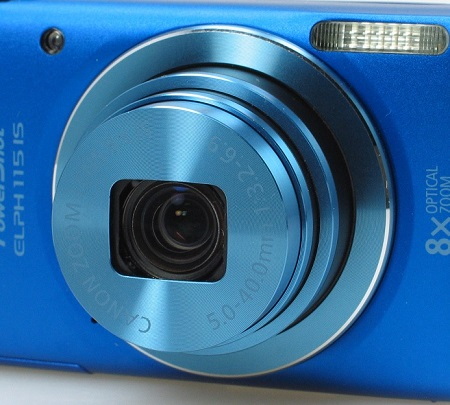 With its 8x optical zoom lens, the PowerShot ELPH 115 IS provides a telephoto range of 28 - 224 mm, which is about average for a thin camera in the sub-$150 price range.
The ELPH 115 measures 0.85 inches in thickness when powered down, as the lens completely folds inside the camera body and a covering automatically slides in front of the glass. When the camera is turned on, the lens extends slightly, making this camera measure slightly less than 2 inches in thickness. At the full 8x telephoto setting, the camera measures about 2.5 inches thick. The camera can move through the entire zoom range in about 1.5 seconds.
This camera's maximum lens aperture is f/3.2 (wide angle) and f/6.9 (telephoto). The PowerShot ELPH 115 makes use of a through the lens autofocus system.
Focus Range:
Canon included Intelligent IS (image stabilization) with the PowerShot ELPH 115 IS, which explains the IS used in the camera's name.
The PowerShot 115 struggles a little bit in low light because it uses a 1/2.3-inch CCD image sensor, which doesn't quite perform as well as a CMOS image sensor in low light. This image sensor's size is small, similar in size to other point-n-shoot cameras. The ELPH 115 offers 16.0 megapixels of resolution, but because of the small image sensor, its image quality won't be as good as a camera that uses a larger image sensor but has fewer megapixels of resolution.
You'll find the PowerShot ELPH 115's built-in flash in the upper right corner of the camera (as viewed from the front). Most small built-in flash units on point-n-shoot cameras have a very limited range over which they'll work, but the ELPH 115's flash range is one of the smallest I've seen at 1.6 to 9.8 feet at wide angle and just 4.3 to 4.9 feet at telephoto. These limited ranges make the flash a lot less useful than it could be. You'll still receive some light from the flash in the scene outside of these ranges, but the chances of your photos having a good flash exposure will be lowered quite a bit.
When shooting in Auto mode, you will have two flash mode options available, Auto or Off. In Program mode you'll have access to four flash settings: Auto, On, Slow Synchro, and Off.
As you're holding the camera, you will want to take notice of the positioning of the fingers on your left hand, as it's very easy to block the flash.

The top panel of the Canon PowerShot ELPH 115 IS has a look that resembles other beginner-level PowerShot cameras, with a limited number of buttons.
The power button is to the left of the shutter button. A zoom ring surrounds the shutter button. Both buttons are of a good size to use comfortably or to find when you're in a hurry.

Canon skimped a bit in terms of the quality of the LCD screen found with the ELPH 115, which really isn't out of the ordinary for budget-priced cameras. The PowerShot ELPH 115's LCD screen measures only 2.7 inches diagonally, which is below average in today's digital camera marketplace. The resolution is also below average at 230,000 pixels.
The camera is so small that the 2.7-inch LCD screen doesn't look completely out of place, but the small size is noticeable if you're used to using a larger LCD screen on a camera.
As you can see in the photo above, glare is an issue with the PowerShot 115's screen. You can pick among five brightness settings with this camera, and by increasing the brightness level, you should be able to counteract the glare when shooting in sunlight.

All of the camera's control buttons are on the right side of the back panel. As with most PowerShot ELPH cameras, these buttons are too small to be used comfortably, especially if you have large fingers. The four-way button is particularly troublesome, as it's set too tightly to the camera body, which makes it difficult to press.
At the top right corner of the back panel, you'll find the two-way toggle switch, through which you can change between Auto and Program modes. Slide the toggle switch up for Auto mode. When you slide the toggle switch down, you'll have access primarily to Program mode, but you also can select among various special effect modes with the toggle switch in the down position.
To the left is the video recording button, through which you can start and stop movie recording.
The four-way button is in the middle of the panel, and it contains the EV, flash, and macro mode settings. The Disp portion of the button allows you to change the data that's listed on the screen.
In the lower left area is the Playback button, which opens Playback mode and allows you to see the images that you've stored on the memory card. In the lower right corner is the Menu button, through which you can open any of the camera's various menus.

There's a USB port behind a flexible plastic hinged covering on the right side of the camera (as you're holding it). The USB covering snaps tightly into place. There is no HDMI port.

The PowerShot ELPH 115 IS weighs less than 5 ounces, even with the memory card and battery installed, which makes this one of the lightest and smallest cameras on the market. Compared to most really low priced, lightweight cameras, the PowerShot ELPH 115 IS has a pretty sturdy feel to it.
The thin battery doesn't have a lot of capacity, and you can expect to shoot less than 200 photos per battery charge -- even less if you have to increase the brightness level on the LCD screen. My tests showed about 180 shots per charge is a realistic number during average usage. At least Canon included a separate battery charger with this camera, which will make it easier for you to charge one battery while shooting with a second battery, should you choose to purchase an additional battery. Then again, adding the cost of a second battery to the ELPH 115 may drive it out of the budget of some photographers.
You'll find the battery and memory card slot behind a hard plastic compartment on the bottom of the camera. The compartment is on a hinge and snaps securely into place. The camera can make use of SD type memory cards.