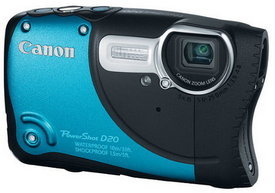 After a few years of waiting, Canon has finally released its next lifeproof camera, the PowerShot D20. Features like a 12.1-Megapixel High-Sensitivity CMOS imaging sensor, DIGIC 4 image processor, Intelligent IS optical image stabilization, 5x optical zoom lens, built-in GPS and full 1080p HD video capture are crammed into a solid new compact, lifeproof body. By lifeproof, we are saying that this camera is waterproof, shockproof, freeze proof and dustproof, making it able to withstand active lifestyles. With an entirely new body design, this is a very interesting looking camera that will turn some heads when you pull it out; while its performance will not let you down.
This new body allows you to take the camera into situations that a normal camera would never be able to survive. Activities like scuba diving or just swimming with the kids are no problem as the camera can handle depths of up to 33ft. Canon has also included a special shooting mode for underwater situations. The seals that keep the camera waterproof also are excellent for keeping out dirt and sand. The D20 has also been designed to withstand a fall from up to 5ft. without any problems. Finally for all the cold weather people out there, the D20 can operate in temperatures as low as 14°F, which is great for playing out in the snow.
With built-in GPS, you will never forget or lose the locations of those beautiful places that you discovered on vacation. With the GPS activated, it will save your location with the image. You can also enable GPS logging which will keep track of your location, even when you are not shooting. This is great for tracking where you have been, in case you would like to retrace your steps some day. While the GPS is active, your battery life will decrease significantly. More about that below.
Operating the D20 is very easy, especially since the camera features only automatic shooting modes. The buttons and camera controls are large and well spaced, making it easy to use in most situations; although you may have a little trouble while wearing thick gloves. The only button we had a little trouble with is the shutter release, as it was hard to tell how far to press it to achieve focus without capturing an image (half-press). It is also easy to mistake the playback button for the shutter release, as they are right next to each other.

Framing and viewing your images is also a pleasure with the 461,000 dot, 3-inch LCD screen. It is easy to see in all lighting conditions including underwater; as long as you look directly at the screen. If you do not look straight on, you will not see anything at all on the screen when shooting underwater.
Our outdoor image samples show us the outstanding image quality that we have come to expect from Canon and their HS system. The images show very pleasing exposure and color, as well as crystal clear focus. It handled all of our tests shots with ease, the only thing that really stood out was some slight aberrations in high contrast areas throughout the images.

Composing your shots is assisted by the internal 5x optical zoom lens with a 35mm equivalent of 28-140mm. This is a great zoom range for most situations, providing a descent wide end and an adequate zoom for typical shots. Don't expect to get to close to a distant object with the telephoto end, but it is great for close-up portraits.
Looking at indoor samples like out M&M man shots, we see that most of the image is tack sharp, minus the text of the left which is a bit blurry in all the images. Other than that, we are very pleased with the overall quality of the image's exposure and color. Noise levels were controlled very well from ISO 400 and below, while above 400 the noise levels increased quickly and detail blurred. Assisting with your low-light, underwater, and indoor images is a small built-in flash unit with a range of up to approx. 11ft. (W). While this will not light a up a medium to large room, it is great for portraits both in and out of the water, as well as a fill flash for backlit images.
Our portrait sample shows an excellent exposure and natural colors for the faces that were detected within the frame. We did find some instances where the flash would have been useful, but the camera's default setting is off instead of Auto; which if you do not remember to change it, you may miss out. As far as the camera detecting faces, it is fast and follows them incredibly well. Face Detection can also be used to trigger the shutter with Smart Shutter mode. This allows you to set the camera and take your time getting into the frame. The camera will wait until it detects your face before it captures the image.
Shooting underwater is as easy as ever, thanks to the preset underwater modes and the bright LCD that is easy to see. Face detection even works quickly underwater, even if your subjects are wearing goggles. This makes sure that the camera is focused on what you want. Our sample images turned out very well in both underwater and underwater macro modes. Since light does not travel as far underwater, you will have to stay as close as possible to your subjects underwater as well as avoiding the zoom if possible. The flash does help underwater, but it does not have a range of anywhere near 11ft. when water is involved.
After our final sample shot in the water, we noticed some moisture/fogging inside the camera; take a look at the screen to the left. While inspecting the camera to we noticed a small amount of sand inside the I/O compartment, which could have allowed a a small amount of water to enter the the compartment. We set the camera aide with all the port doors open to try and dry it out to finish our timing tests and see if there were any after effects from this issue. After leaving the camera sit open for two days, it did dry out and all of the fog went away. The camera was back to normal operation; as expected. We contacted Canon about the issue, and feel we may have received a defective camera. They sent us a new one, and we'll be testing it underwater again to see if in fact there was a problem with our original eval unit. We'll have an update in the next few days (6/14/2012, see the update below).
With the ability to capture full 1080p HD videos, you will never have an excuse to miss a special event or situation when an image just isn't enough. The HD videos from the D20 are pretty standard for a point-n-shoot digicam. They are good looking videos that play smoothly from the digicam to a HDTV via an optional HDMI cable, or just played back on the camera's LCD screen. The camera also includes some simple video editing features that allow you to cut and trim your videos while they are on the camera. Capturing the audio for your movies is a small, very sensitive built-in mic that will pick up all the sounds that are closest to the camera. This means you need to be careful where you record from to avoid the background noise that is present in our sample.
Powering the D20 is a 3.7V, 1000mAh rechargeable Li-Ion battery. Canon claims that the camera is capable of capturing up to 280 images on a single charge with this battery. This is pretty accurate if you leave the GPS feature off. With it running, you will lose at least half of the images that the camera can capture. If you enable the GPS logging, it will consume even more power. We were able to capture over 80 images and videos with the GPS on while completing our tests. We did have to recharge once before a shooting trip; but just to be safe. Also included is a portable quick charger that allows you to charge batteries outside of the camera. This means you can keep multiple batteries charged, which is a great idea for vacations or adventurous trips where you'll likely use the GPS function more.
Bottom Line - Canon has finally rejoined the "lifeproof" world with the PowerShot D20. A few years after the introduction of the D10, they have made some great improvements, including a much easier to handle body. With all of the features, hardware and quality found in all PowerShot cameras; you are not missing out on anything. With a MSRP of US $349.99, this is an excellent option to get Canon's outstanding quality in a camera that can live up to your family, vacations or anything else you can think to put it through.

Update: Like we mentioned above, with the technical issues that we ran into with the D20, Canon was gracious enough to send another unit for us to use. With this second unit we did not see any of the problems that we encountered with the first model. After running it through the same waterproof tests as before, we did not have any fog or water of any type getting inside the camera; leading us to believe that we most likely just had a defective unit to begin with.