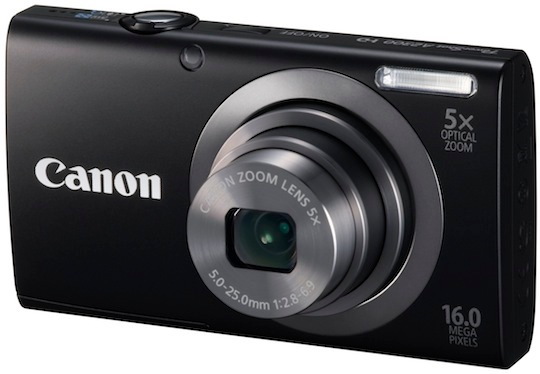 The Canon PowerShot A2300 is one of six all new A-series cameras recently announced by Canon. It is virtually interchangeable with the A2400 IS, which costs $10 more, but as the name implies, the A2300 does not include optical image stabilization. Otherwise, you get the same 2.7-inch LCD screen and 5x optical zoom.
And, just like the rest of the A-series, it features Smart AUTO (it automatically choses from 32 shooting modes to capture great photos in any and all lighting conditions), a large 16 megapixel CCD image sensor, a 28mm wide angle lens, 720p HD video recording, and a Help Button (new for this year). The A-Series, which costs between $109.99 and $199.99, has been designed for newer photographers looking to get the most for his or her buck. The A2300 costs $30 more than the A1300, but includes a rechargeable battery (the A1300 runs on AAs).
Canon PowerShot A2300 Features:
The Canon PowerShot A2300 will be available in March in black, silver, blue, and red with an MSRP of $149.99.
Additional Product Views: