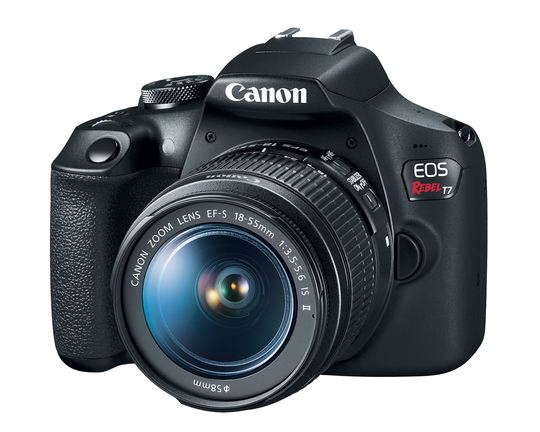 Canon is not giving up on entry-level DSLRs and the new Rebel 7 is proof. It's an upgrade over the two-year-old Rebel T6, but not as significant of one as you might think. It has a new 24.1 MP APS-C CMOS sensor which is an improvement by 6 megapixels, and Canon's new "Scene Intelligent" and auto modes which can be incredibly useful to beginners until they find their way around the camera. It also has Wi-Fi and NFC to keep you connected to the Canon App.
The Rebel T7 is really all about the improved sensor. It still has a 1.6x crop factor when adding a lens most APS-C sensors do and it also still has the exact same 9 point phase detection autofocus and 3fps burst shooting speed as the T6 and can only shoot 1080p video at 30fps. These lack of improvements aren't necessarily bad, as the camera comes with a Canon EF-S 18-55 f/3.5-5.6 IS II lens for around $550 bucks.
The three-inch screen isn't a touchscreen, nor does it articulate. This is a camera for people who want to learn how to shoot pictures and don't care about 4K or sports/action photography. It's a no-frills camera that comes with a solid lens for a relatively cheap price. If you want to take better pictures than what you can get on your phone, but don't want to break the bank and don't care about video, than this camera could be your gateway into digital photography.
KEY FEATURES
WHAT'S IN THE BOX
PRICING & AVAILABILITY
The EOS Rebel T7 is scheduled to be available in April 2018, and will be sold as a lens-and-body kit with the EF-S 18-55 f/3.5-5.6 IS II for an estimated retail price of $549.99