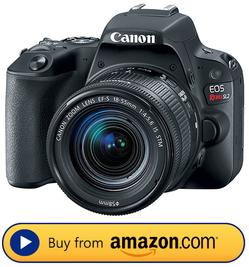 Preview posted 06/28/2017 by Michael Palmer
Full review posted 01/17/2018 by Josh LeBlanc
Photographs by Josh LeBlanc & Michael Palmer
The Good. Canon took its most affordable DSLR (the SL1) and stuffed it with a better image sensor and one of the best (video) AutoFocus systems on the market today. At less than $650 for the kit, this budget-friendly DSLR features a guided menu system, designed to teach newer photographers how to advance past Full Auto. It will actually help you become a better shooter. Plus, if you want to make videos or vlogs, there's a Vari-angle display to help you frame your shots while you're on camera. And, thanks to its lens compatibility (from Canon and third party lenses), as you learn and grow, you can buy and/or rent more expensive glass before saving up for your next camera body.
The Bad. Unfortunately, the SL2 is slower than Canon's other entry-level DSLRs, lacking weather sealing and even the more advanced metering systems for more accurate exposures. Also, like most of Canon's other 2017 cameras, the SL2 doesn't record 4K video.
The Bottom Line. The EOS Rebel SL2 is the best entry-level Canon DSLR ever made and provides all the tools you need to learn photography and/or filmmaking and vlogging on a budget.
Pick This Up If... You want an easy-to-use entry-level DSLR that offers excellent photo quality and fast performance levels at an affordable price, but you aren't seeking a DSLR with top-shelf video results
INTRO
Good news for beginner/aspiring photographers. If you're looking to put down the smartphone and take the next step up in image quality, a step up that includes the flexibility of using all sorts of different lenses, Canon has updated their most affordable DSLR offering for 2017.
The new EOS Rebel SL2 takes over for the aging SL1, adding a slew of improvements, including the world's fastest Dual Pixel CMOS AutoFocus system, a new Vari-Angle touchscreen LCD, improved low light performance, higher video frame rates (up to 1080/60p HD), annnnnnnnnd three different types of wireless technologies.
Oh, and if you're nervous about buying a DSLR, don't be.
Canon updated their graphical user interface this year and added Feature Assistant, which not only makes the learning process easy and fun, but guides you through the basics like how to dial in your depth of field (do you want it shallow with blurry backgrounds or sharp all the way to the horizon), or how to give your still images a sense of movement (do you want a river frozen in time, or looking like it's flowing over rocks and rapids).
Note: Captured on the Canon 6DMK2, but sharing here becase
the SL2 can teach you how to do this, which is awesome!
LENS USED
Canon shipped us the EF-S18-55mm f/4-5.6 IS STM with the camera in the EOS Rebel SL2 Kit. Here's what the view looks like between 18mm (~29mm equivalent) vs. 55mm (~88mm equivalent):

The Rebel SL2 has Face Detection you can activate if you're trying to get images of loved ones and they keep moving on you.

Through the optical viewfinder there are only 9 focus points, however through live view and when shooting video, the camera is capable of Dual Pixel Autofocus. Canon, in fact, claims the Rebel SL2 has the world's fastest autofocus on entry-level DSLRs.


METERING
(42mm, F8, 1/200, ISO 1,600)
For more samples, check out our SL2 Sample Image Gallery.
The SL2's metering is pretty solid overall. Though I found that it has a hard time if there's a stark contrast of light in the image. It's not quite as accurate as the higher end Canon DSLR cameras, but you get what you pay for. Just like the focusing, the metering kind of gets a little wonky when you're shooting in lower light.

I actually found the images from manual metering which can be done from -5 to +5 in 1/3 increments to be the best. The colors and the timing all seemed better than Canon's Scene Intelligent Auto, which seemed to capture overly bright images.

STILL IMAGE QUALITY
(34mm, F5, 1/500, ISO 200)
With a 24.2 MP sensor, you will get some stunning pictures. It's all going to come down to how you shoot. The blues from a clear blue sky were deep and rich and the reds popped out of the images, especially in RAW mode, which captured a surprising amount of dynamic range and fine details.

You can shoot images in Manual, Aperture Priority, Shutter priority, Program AE, Scene Intelligent Auto, Creative Auto, Special Scene and Creative filters. Sometimes the mode will be event-driven, but mostly it will be user's preference.
(55mm, F5.6, 1/400, ISO 200)
The pop-up flash is really only good for filling in shadows. It's not something you want to use to actually light a whole scene up. The camera can do Shutter sync, and full auto as well as it becomes available in some of the creative modes depending upon the need.
For more sample images, please check out our Canon Rebel SL2 Sample Image Gallery.

ISO PERFORMANCE
(55mm, F5.6, 1/2000, ISO 1,600)
The Canon Rebel SL2 has a native ISO performance of between 100 - 25600. You'll find photos in the 6,400 range not only usable, but the grain is surprisingly small. The extended ISO range runs as high 51,200 ISO equivalent, but your images won't really be usable. You're going to get pictures that look like they came off of a thirty-year-old security camera, so, it's more there just to say "hey if you really want to take a picture you can."
VIDEO QUALITY

The Canon Rebel SL2 has the ability to record Full HD (1920 x 1080) video at up to 60 frames per second. You can capture it as a .MP4 files using H.264 codec. The maximum bit rate when recording 1080/60p video is 60 Mbps. The maximum clip length is 29 minutes and 59 second. You can also record time-lapse videos at dull HD 30fps playback. There's an external microphone Jack for you Vloggers, but there's still no headphone jack, so watch those levels.

While the SL2's nine AF points for shooting stills fits an entry-level camera, the SL2 also boasts Dual Pixel CMOS AF for video recording (and live view still mode), and it's one of the best systems out there. It's fast, accurate, and even tracks movie subjects.
That said, it struggles a bit in low light and there are no 4K resolution options. It's not a deal-breaker at this price point, but I don't understand the lack of 4K recording in entry-level DSLRs. The sensor can handle it, perhaps Canon wants you to buy a 5D if you want 4K.
WIRELESS PERFORMANCE
(55mm, F5.6, 1/250, ISO 125)
The Rebel SL2 has built-in Wi-Fi, NFC, and Bluetooth, which is a HUGE upgrade over the SL1. The Canon phone app is pretty great and works almost flawlessly every time. It's a huge help to use the App as a remote trigger, but it's even better than that as you can see on your phone an approximation of what the image is going to look like, so, you'll know if you're going to get the shot or not. Another plus is the ability to transfer photos wirelessly. In this age of social media, it's nice to be able to show off your work without having to download an entire card.
PROS & CONS
Pros
Cons
BOTTOM LINE
(55mm, F5.6, 1/3200, ISO 100)
For more samples, check out our SL2 Sample Image Gallery.
We have a few gripes with the SL2 -- harder to hold for those with sizeable hands, low light processing is average, no 4K video, it's not fast, and we still don't understand Canon's single-over-dual adjustment dial strategy -- but at $600-650 with a kit lens, it's a bargain.
You get a terrific image sensor, which shows off vibrant blue skies, tons of auto functions and the guided (tutorial-esque) menu system, accurate metering, and a top-tier AutoFocus system for shooting video. The Rebel SL2 is a camera you'll be able to use for years and, along the way, it will help you take better photos and/or shoot better videos. And with a Canon camera, this means you can invest in better glass as you grow and, whenever you're ready for your next camera body, jump right into the next level without ever looking back.
The SL2 might be the best entry-level DSLR Canon has ever made.