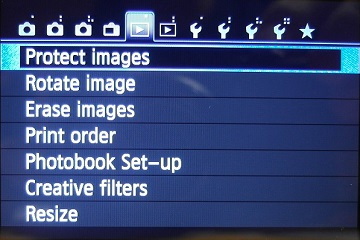 Please excuse the poor quality of these screen captures. The Rebel T5i kit does not include an AV output cable, therefore we had to photograph the display screen.
You'll find the Playback mode button in the bottom right corner on the back of the T5i, marked in blue with a play icon. Press this button to see the images that are stored on the memory card.
Different information about each image is displayed on the screen, depending on the shooting mode and settings you used to record the image. The shutter speed, aperture, exposure valuation, and file name will be among the data listed across the top of the screen.
Press the Info button in the upper left corner on the back of the camera, and you'll see detailed data. The image will shrink to occupy the upper left corner and a histogram will be added to the screen next to the image. In the bottom half of the screen, you'll then see additional information about the image, including the shooting mode, metering mode, flash valuation, ISO setting, dynamic range, white balance, picture style, resolution, file size, color space, and date and time the image was shot. Again the data displayed here will depend on which shooting mode and settings you used to record the photo.
If you press Info again, you'll see RGB histograms added to the screen, while some of the detailed data will be removed. If you press Info a third time, the image will return to the full screen and all shooting data will be removed.
To move to the next image on the memory card, you can drag your finger across the screen, just as you would with a smartphone or tablet. Or you can use the four-way button to scroll forward or backward.

I earlier discussed the very helpful Quick Control shooting screen available through the Q button. Inside Playback mode you'll find a set of buttons that work like the Quick Control shooting screen.
Press the Q button to open a set of buttons on both sides of the screen in Playback mode. To activate these buttons, you either can touch them or highlight them with the four-way button. The choices associated with each button then will appear as additional buttons along the bottom of the screen that you can again either touch or highlight with the four-way button and press Set.
The Rebel T5i's Playback Quick Control buttons are:
The Creative Filters option in Playback mode gives you the ability to add some fun features to the images you've already shot. Each time you add a Creative Filter to an image, the T5i makes a copy of the image, which means you won't affect your original image by making these editing changes. The Creative Filters on the Canon T5i are:

Nearly every digital camera has a thumbnail index function, which allows you to scroll through multiple images more quickly, and the Canon Rebel T5i is no different. However, if you're someone who uses this feature quite often, you may be a bit disappointed with the limited thumbnail index options found on the T5i.
With a single image on the screen, press the AE Lock button on the Rebel T5i, which is marked with an index grid icon in blue at the upper right corner of the back panel. The look on the LCD screen will change to a 2x2 grid of thumbnails. Press the AE lock another time to see a 3x3 grid. Most cameras allow you to continue increasing the size of the grid to include more thumbnail images, but the T5i stops at a 3x3 grid. To shrink the grid back to 2x2 or to return to a single image, press the AF Point Selection button, which is just to the right of the AE Lock button.
You can use the touchscreen LCD to open the thumbnail index grid, too. With a single image on the screen, drag your fingers across the touchscreen in a closing pinching mode to create the grid. To bring one of the thumbnails in the image to the full screen, just touch the image twice. If you'd like to see the file name, shutter speed, and aperture setting for the highlighted image in the grid, press the Info button with the thumbnail highlighted.

The Canon EOS Rebel T5i has a magnify feature within the Playback mode too. With a single image on the screen, you can drag your fingers across the screen in a widening pinching movement, similar to what you'd do with a smartphone or tablet. To adjust the portion of the image that you can see, just drag your finger across the screen to "pull" more of the image onto the screen. A small white-bordered box in the lower right corner indicates how the current view (marked by the small white rectangle) relates to the overall view.
You can use the camera's buttons to activate the magnify feature, too. Press the AF Point Selection button mentioned earlier and the magnification will begin. Continue pressing the button to increase the magnification. The Rebel T5i has 15 magnification levels available. To change the portion of the magnified image that you can see on the screen, use the four-way button.
Touch the Back button in the upper right corner to return to the standard view with no magnification.

While working in Playback mode, you can open the Playback menu by pressing the Menu button in the upper left corner of the back panel of the Rebel T5i camera body. The two screens associated with the Playback menu are marked with Playback icons on tabs across the top of the screen.
You can use the four-way button to access the Playback menu tabs or touch one of them, although the tabs are a little small, making it tough to press them accurately. The Playback menu options are:
Movies stored on the Rebel T5i's memory card are marked in the full screen with a triangle Play icon in the middle of the screen. You can see data about the movie, including the movie icon and length of the recording in the upper left corner of the screen, along with the file name in the upper right corner.
Press the Info button to see some additional information on the screen. The still image of the video will move to the upper left corner of the T5i's screen and a histogram will appear in the upper right area. You'll see data about the movie in the lower half of the window, including file size and movie resolution.
If you press Info a second time, the Rebel T5i will add an RGB histogram to the screen, removing some of the detailed shooting data. Press the Info button a third time to return the image to the full screen and to remove all data other than the movie recording icon and the Play triangle.

If you want to playback movies on your Canon T5i LCD screen, just touch the triangle Play icon. You'll see the time expired in the upper left corner of the LCD. Touch the screen again to pause the movie. Once the movie stream is paused, the T5i will display a set of icons along the bottom of the screen that will allow you to control the video playback, and even cut (edit) the length of a video. Press Play again to finish the entire video clip.