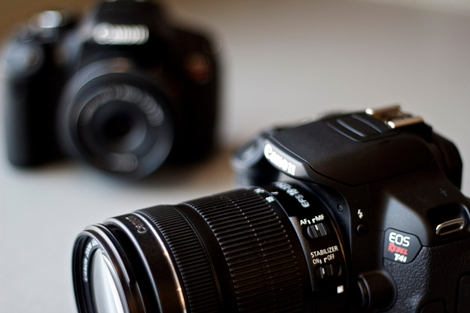 Over the last few years, Canon's EOS Rebel series of entry level DSLRs has become a fertile market for those wishing to make the jump to DSLR while remaining budget conscious. For 2012, Canon has announced the T4i, described as their flagship entry level model. Previous models, the T3i and T3, will remain in production as more affordable options. The T2i is slated to be discontinued (so look out for steep discounts). On the surface, the T4i boasts similar specs to the T3i -- 18 megapixels, vari-angle display, 5 frames per second burst shooting, Full 1080p HD video recording (in 24 or 30 frames per second), and compatibility with all Canon EF and EF-S lenses. But there's some new tech under this new Rebel's hood.
First, the APS-C sized image sensor is actually a "Hybrid CMOS AF" sensor, which means it has Auto Focus built right in and uses both phase and contrast detection for optimizing Auto Focus delay in both still and video recording. Essentially, it's the best of both worlds between still and video camera technology. How does this help you? Well, the the T4i not only has the 9-point All Cross Type AF from the 60D (previous Rebels only had 1 Cross Type), but when combined with the new EF 18-135mm STM kit lens, the T4i has Movie Servo AF, which is virtually silent while running continuous Auto Focus during video recordings. If you've ever tried to record video from an older Rebel models or most current DSLRs, you're probably well aware of that buzzing, clicking sound the whole AF system makes because it's hidden behind the internal mirror. Now, you can focus silently and on the fly, electing for the camera to focus for you based on Face Recognition, Single Point, or Multipoint AF settings. Or you can direct the focal points yourself using the T4i's new touchscreen vari-angle display. Heck, this Auto Focus will even, after you tell it what your subject is, track said subject whether you move the camera or he/she/it moves.
The T4i's touchscreen, another improvement over the T3i, is like having an iPhone or Android smartphone tucked into the back of a DSLR. It's super easy to access menu functions, settings like shutter speed or aperture, as well as pinch-zooming or flipping through recently shot photos. The screen itself, which we personally demoed, is much easier to use that some of Canon's earlier touch screens -- everything works with the lightest touch and, after a quick learning curve, it may even change the way some shutterbugs operate DSLRS (though don't worry, the trusted physical buttons remain intact).
Mutli-shot Noise Reduction is another new feature, which merges 4 shots to eliminate as much noise as possible from certain shooting conditions. Also, you can choose how much of the camera's Noise Reduction you prefer, whether there be lots of NR or none at all. Canon engineers have also redesigned the Mode Selection dial a bit. Gone are the Video recording and A-DEP selections. A-DEP, according to Canon, was a rarely used holdover from the film era, and Video has been relocated to a selection next to the ON/OFF switch (a nice location, in my humblest opinion). Replacing A-DEP and Video on the dial, we have two new modes: Handheld Night and HDR Backlight. Handheld Night merges 4 photos to obtain the clearest elements during low light shooting, and HDR Backlight merges 3 shots at various exposures to create that wide contrast and saturated look of HDR photography. However, it's important to note that owners won't have access to the 3 "separate" photos; the only image saved is the final product. And, it should also be noted that all of these multi-shot combinations are only good with .JPG photos.
We only had a few short minutes to play with a pre-production model T4i, but we look forward to exploring the camera more. If you've considered buying, or own, previous EOS Rebel cameras, the T4i has much of the same horsepower as those trusted cameras with a few added performance features aimed at those who want his or her DSLR to be a much better video camera (there's even a new built-in stereo microphone). The question potential buyers will have to ask themselves is this; is quiet video, an upgraded processor, stereo sound recording, and a terrific touchscreen experience worth the increased prices (about a $100 over what I paid for a T2i when it was new)?
Canon EOS Rebel T4i Features:
The Canon Rebel EOS T4i is available at three MSRP price points: 1) $849 Body Only, 2) $949 with the standard 18-55 kit lens, or 3) $1199 for the 18-135 STM kit.
Two new lenses are also available, the previously mentioned STM EF 18-135, which will cost $549, as well as the STM EF-40 f2.8 costing around $199. "STM" stands for Stepping Motor Technology, and with the 18-135 model in particular, it provides ultra smooth and virtually silent continuous autofocus when used with the new T4i.

Additional Product Views:
Note the Video Camera selection is now above the ON switch:
Stereo Mic:
You can check out the price of this camera on Adorama by clicking here.