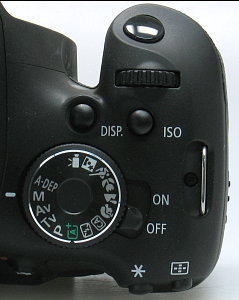 Canon's T3i has several controls located on the top of the right hand grip. They include (starting from the top) the shutter release button, the main control dial, the display button, ISO speed button, along with the Mode Dial and the Power switch mounted to the right of it.

The Mode Dial is divided into 3 Zones:

The EOS Rebel T3i is compatible with SD/SDHC/SDXC type memory cards (Eye-Fi compliant). The card slot is on the right hand side of the camera behind a small door. We show the SanDisk Extreme SDHC 4GB memory card.


The I/O (Input/Output) ports are on the left side of the camera and are covered with a flexible rubber door. The image to the left shows the A/V and HDMI ports. The A/V port handles standard video output and the USB 2.0 high-speed connection to your PC, as well as direct printing. The bottom HDMI port is used for connecting to a HDTV television set. The right image shows the remote release and microphone ports. 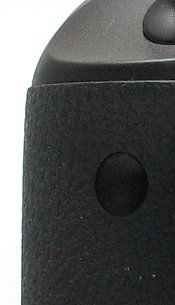 The EOS Rebel T3i is compatible with the RS-60ES remote switch, as well as the RC-1, RC-5, and RC-6 remotes. Shown here is the remote sensor located on the front right grip.

Canon powers the T3i with an LP-E8 7.2V, 1120mAh Li-ion rechargeable battery pack. At normal temperature (73ºF and above) it's good for ~550 shots without flash or ~440 pictures if the flash is used 50% of the time. At colder temperatures (32ºF and below) these numbers drop to ~470/400. Using Live view mode also effects battery life, the number of possible shots drops dramatically. In normal shooting temps, you can capture ~200 shots or about 180 shots in colder temps. These figures are based on CIPA testing standards.

Power can also be supplied by the optional AC Adapter Kit ACK-E8. 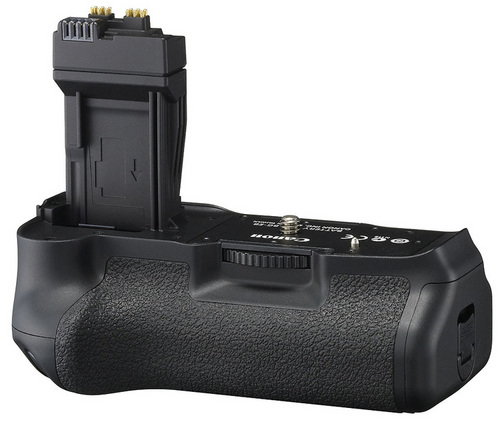 The Rebel T3i is also compatible with the optional BG-E8 battery grip, which offers double the battery life. It obtains this by holding 2 LP-E8 or 6x AA batteries and also provides a shutter button and control dial along with AV/Exposure Comp., AE/FE Lock (Index or Reduce in playback), and AF point selection (Magnify in playback) buttons for vertical orientation. The Canon BG-E8 offers creative flexibility by providing a stable grip for vertical as well as horizontal shooting positions.