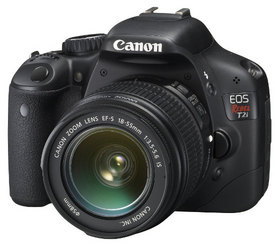 Canon continues to improve their entry-level line of EOS Digital Rebel dSLRs, with the latest version being the Rebel T2i (aka EOS 550D). This unit replaces the T1i from last year with several upgrades, many of which have been borrowed from its big brother, the EOS 7D. The T2i boasts some very impressive features for a "base" level dSLR, including an 18-megapixel CMOS image sensor, Canon's EOS Integrated Cleaning System, DIGIC 4 processor, a 3.0-inch LCD (1.04 million pixel), Live View shooting mode, 63-zone Dual layer metering system, Full HD (1080p) video mode, and much more. This is truly the most powerful Digital Rebel Canon has come up with (as of 8/2010).

The overall appearance and control layout on the T2i hasn't changed much from the T1i. Canon has changed the color of the Mode dial, most of the buttons have been redesigned but reside in the same location, and they've added a specific Live View/Movie Start button. That said, like past Digital Rebels, the T2i fit quite comfortably in my large hands. While not a "compact" dSLR, the T2i offers a good size and weight that will allow you to use a smaller camera bag when compared to some of the larger EOS bodies. I found the build quality was excellent, giving the camera a nice 'well worth it' feel. The amount of controls on the back are scaled down quite a bit compared to higher-end dSLRs, however there are still plenty of useful buttons that allow you to quickly change typical camera settings that are often used (like ISO, White Balance, Picture Style mode, etc.) All of these controls are in similar (almost identical) positions as compared to the T1i, and are placed in a comfortable manner. The new button design is a welcomed improvement over the round style buttons of old.

If you've owned a digital Canon EOS camera in the past, you'll feel right at home when using the menu system. It uses their typical layout, which is logically organized and allows for easy navigation using either the 4-way controller or the control dial. While the T2i is an advanced camera that offers a great deal of functionality and control over the exposure process, it's menu system is laid out so even Novice users will be able to find the settings they are looking for easily. Like the T1i, the T2i boasts a large 3.0-inch LCD screen, which is not only used for navigating the menus and reviewing files, but it is also a Live viewfinder for stills and video. This is a feature that has become standard on dSLRs these days, which allows you to use the LCD much like you would on a consumer point-n-shoot digicam. The one major improvement found on the T2i's display is increased resolution. Canon has bumped up the pixel count from 920,000 to 1,040,000!! That makes the LCD on the T2i one of the most resolute we've ever worked with, and we found it offers excellent detail, sharpness, and improved contrast compared to other 3.0-inch displays on the market today.

Canon continues to use pentamirror type viewfinders on their EOS Rebel line. The eye-level unit on the T2i provides a large, clear view of your subject with 0.87x magnification and a 19mm eye point. The eyecup is also comfortable and blocks out most ambient light when you press your face against it. This unit also covers approx. 95% of the captured image, and is not subject to "blacking out" like seen with EVFs when shooting in burst mode. There's a good amount of shooting information displayed along the bottom, allowing you to easily review settings without having to move the camera away from your eye and lose sight of your subject. One feature that we see popping up more and more on cameras is a small sensor located underneath the optical viewfinder. When you bring your eye up to the OVF, it senses your face and shuts the LCD off. This is a handy little feature that will help save battery life. For those with not so perfect eyesight (like myself), the T2i offers -3.0 - +1.0 diopter adjustment. Like the T1i, I found the OVF on the T2i was very comfortable to use while testing the camera, with a nice large view of your subject along with valuable exposure information for making changes on the fly.

The T2i's image quality results were right in line with our expectations, especially since we tested the EOS 7D first, which shares the same 18-megapixel CMOS image sensor. For the most part the camera's AE (Auto exposure) system did very well, however we noticed some issues when shooting in certain conditions where there was very harsh sunlight. The camera seemed to produce strong exposures with lost or blown-out detail in highlights. Looking at our WWII Cannon shot as a prime example, you can see that the camera struggled with the strong lighting on the "blast" shield of the cannon where the 5-pointed star is found. The siding on the Ice Cream shop in the background is also blown-out. While this is easily corrected with a touch of negative exposure compensation, I was a bit surprised that the T2i had this much trouble in these conditions, especially when you consider Canon upgraded the T2i's metering system with a newer 63-zone Dual Layer Metering sensor. Colors are very natural and life like when using the standard Picture Style mode, and contrast was pleasing. The kit 18-55mm zoom lens also helped the camera produce sharp results throughout the aperture range, with typical amounts of aberrations noticeable when critically inspecting photos. Overall this is a great kit lens with built-in optical image stabilization, which should serve you well until the time arises that you are ready to start adding new glass to your existing camera gear.

One of my favorite types of photos to capture are portraits of people. I'm an amateur wedding photographer on the side, and was fortunate enough to have the T2i along for a wedding reception I shot for some friends. Throughout the festivities, I was very impressed with how well the T2i performed indoors with my 580EX II attached. Even under some very difficult conditions due to some large exterior windows and poor indoor fluorescent lighting, the combination of the T2i's impressive High ISO performance and the powerful 580EX II speedlite proved to be a very capable duo. For those who might not be able to fork out the "dough" for a $500 external flash, rest assured that the built-in unit does well for starters, and should suffice until you can save enough pennies to get a nice external speedlite. I highly recommend the 580EX II if you can afford it. When viewing our M&M ISO series, I found that the T2i offers superior High ISO performance when compared to most of it's competition. With the High ISO noise reduction set to the factory default (Standard) you will see that there is Very little noise detectable from ISO 100 - 800. Viewing 1600 photos at 100% you will start to see some slight luminance noise in dark shadow areas as well as on strong colors (like the M&M man's red shell and green base). ISO 3200 also looks very pleasing for such a high sensitivity setting, with noise becoming more noticeable, especially in large areas of color where you start seeing some blotchiness. While there is plenty of visible noise when viewing our ISO 6400 sample full screen, I was surprised at the amount of fine detail the T2i was able to retain. ISO 6400 would still be able to produce usable mid-sized prints without a problem, depending on the conditions at hand. At ISO 12,800, you will see a great deal of noise, however the T2i's ISO 12,800 photos are right up there with the 7D's in regards to quality, and remember not many dSLRs even offer sensitivity settings this high. While I don't see this setting being used often, it's nice to know that it's available if you are in a bind where capturing a usable photo is more important than overall quality.

Canon continues to lead the market in regards to dSLR video options and quality. Like I mentioned earlier, the Rebel T2i offers Full HD video capture. You can record videos at three resolutions, 1080p (1920x1080), 720p (1280x720,), or SD/VGA (640x480) with audio. There are several frame rates available (24, 25 or 30 frames per second) when shooting 1080p, depending on the type of "look" you are trying to achieve. Canon has made several improvements to their EOS Movie mode functions, including Manual exposure control and full use of the AF system. They've also added a new 640 Crop mode, which offers an equivalent of 7x magnification when compared to shooting normal VGA sized video. Much like digital zoom, the camera basically enlarges the center of the frame giving you a "zoomed in" look. I truly enjoyed using the T2i to capture some video out on the dance floor, and find that holding dSLRs for video can be comfortable once you get used to it. In our sample, you see excellent exposure, decent sound, and minimal noise when you consider the lighting conditions. I will note that in the video sample there are some colored lights flashing on the dancers in the video, which at times made it look like the camera was having white balance issues. This is not the case, the colored gels were just throwing carious shades of red, orange, and blue onto the faces of the people. The addition of AF during video is a huge improvement over the T1i. We noted in that review how focus was the only real issue we had when capturing video, which Canon has now solved on the T2i; kudos to Canon for such a quick fix!

Our battery life results were right up there with Canon's claims. I was able to easily capture 500+ frames on a single charge from the LP-E8 battery pack. This was with a pretty good mix of using the camera's built-in flash, Live View mode for video capture, and an external flash unit along with most of our other tests which require extended use of the cameras menu and Playback features. If you're just a hobbyist, the included battery pack should serve you well and will offer plenty of juice to cover a long day of shooting. However, we always recommend picking up at least one spare pack to keep charged and ready; there's nothing more aggravating than missing that spontaneous moment due to a dead battery (or a full memory card for that matter.) We also highly recommend that you add a couple large and fast SDHC or SDXC type memory cards to your purchase.

Bottom line - Canon's T2i continues the traditions of the Digital Rebel line by offering outstanding performance, high-quality still/video capture, and plenty of advanced controls, all with a very appealing price tag of just $899.99 US with the kit 18-55mm IS zoom lens. The T2i is a very capable dSLR that offers features and performance in both still and video modes that are unmatched at this price. Therefore, we give the Canon EOS Digital Rebel T2i our highest recommendation for those seeking a powerful dSLR system for less than $900.