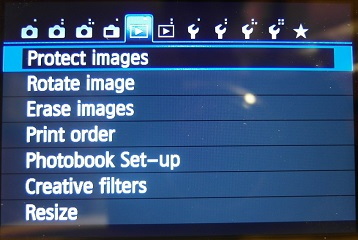 Please excuse the poor quality of these screen captures. The Rebel SL1 kit does not include an AV output cable, therefore we had to photograph the display screen.
The Playback mode button on the Canon Rebel SL1 is in the lower right corner of the back panel. Within Playback mode you can see the images that you have stored on the SL1's memory card.
When viewing an image, you can see a bit of information about it, including the shutter speed, aperture, EV setting and file name across the top and the total number of photos on the memory card in the lower left. (You might not see all of this data, depending on which shooting mode you were using and which settings you changed to record the photo.)
Press the Info button on the back of the camera to change the data that's displayed. You'll see the image shrink to occupy the upper left corner and a basic histogram appear in the upper right corner. Along the button half of the screen, you'll see detailed information about the image, including the shooting mode, metering mode, flash valuation, ISO setting, dynamic range, white balance, picture style, resolution, file size, color space, and date and time the image was shot.
Press Info again to add RGB histograms and remove a bit of the shooting data. Press Info one more time to return the image to full screen and remove all icons.
To scroll to the next image in the list, you can use the four-way button or you can slide your fingertip across the touchscreen LCD, just as you might with a smartphone or tablet.
The Q/Set button opens a Quick Control-like menu in Playback mode. When the buttons appear along both sides of the screen after you press the Q/Set button, you then can touch each button to see additional buttons along the bottom of the screen or use the four-way button to make selections. The Playback Quick Control buttons are:
Canon included a thumbnail index function with the EOS Rebel SL1, allowing you to scroll through images quickly. You can use the four-way button or the command dial to scroll through the images. Press Q/Set to bring a highlighted thumbnail to the full screen view.
To open the thumbnail index, start with a single image on the screen. Press the AE Lock button on the back of the SL1, which is marked with an asterisk in white and an index grid icon in blue, and you'll see a 2x2 grid of thumbnails. Continue pressing the AE Lock button to see a 3x3, 6x6, and 10x10 grid of thumbnails. To see fewer thumbnails in the grid, press the AF Point Selection button, which is just above the AE Lock button.
You also can open the thumbnail index grids with a single image on the screen by dragging your fingers across the touchscreen in a closing pinching mode. To go from a larger grid to a smaller grid -- say from 6x6 to 3x3 -- you can drag your fingers across the touchscreen in an widening pinching mode.
Initially you'll see nothing on the screen other than the thumbnails. If you press the Info button in thumbnail index mode, though, you'll then see the shutter speed, aperture, and file number for the currently highlighted image across the top of the screen. Press Info again to remove this data from view.

To make use of the Canon SL1's magnify feature within Playback, press the AF Point Selection button with a single image on the screen. Continue pressing the button to increase the magnification, as you can select from 15 magnification levels. Use the four-way button to scroll around inside the magnified image. A small white-bordered box in the lower right corner indicates how the current view (marked by the small white rectangle) relates to the overall view.
Touch the Back button in the upper right corner to return to the standard view with no magnification.
You also can control the magnification using the touchscreen LCD. To magnify the image, drag your fingers across the screen in a widening pinching movement. To reduce the magnification, using a narrowing pinching movement. You then can adjust the current view by dragging your finger in the direction you want the image to move.