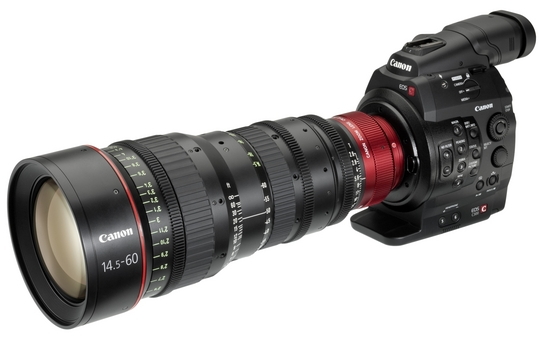 Canon has invited itself to Hollywood. Yesterday, the camera manufacturer announced a new "C" (for Cinema) series of EOS cameras made specifically for digital motion picture production. The Canon EOS C300 features a brand new super 35mm equivalent 8.29-megapixel CMOS sensor capable of capturing "4K" imagery (made up of 1920 x 1080 pixels for all 3 colors -- RGB). While the camera is not capable of full 4:4:4 color sampling, it manages a 4:2:2 @ 50 Mbps (as a reference, very good Blu-ray discs playback at 30-40 Mbps). In terms of variable frame rates, the C300 will shoot anywhere between 1 and 60 frames per second, but can only shoot 60 fps at a 720p resolution, which is a letdown as many consumer-level dSLRs already do this. [FYI: 24 fps is the standard frame rate for feature films and playback in local cinemas; if you shoot faster than 24 fps, during playback the footage will appear "faster", and if you shoot slower than 24 fps, you get slow motion.]
The compact camera body is dust and drip proof, and also features a built-in cooling system. It will be available in two model types C300, and the C300PL. The C300 is designed to work with all Canon EF lenses (that's over 60 lenses), including 4 brand new Cinema series prime and zoom lenses. When using EF lenses, the C300 utilizes Peripher Illumination Correction -- meaning, it figures out which specific lens your are using an automatically corrects for vignetting while allowing for camera iris control. The C300PL is compatible with all industry-standard PL lenses.
The new EOS Cinema brand is Canon's attempt to compete with other professional digital cinema cameras from Sony, Panasonic, Arri and, of course, RED. During its debut an announcement, Canon boasted the C300's ability to shoot film-like imagery without needing tons of extra light; in most cases, natural light should do. However, to my critical eye, the C300 has a long way to go before it is both film-like, and like many digital cameras, needs bright light sources to avoid suffering from digital noise. We'll keep our eyes open to see how this and future Cinema EOS cameras develop.
Canon EOS C300/C300PL Features:
The Canon EOS C300 will be available early next year for around $20,000. The EF lens mount body should launch in January, followed by the PL mount body in March.
Additional Product Views: