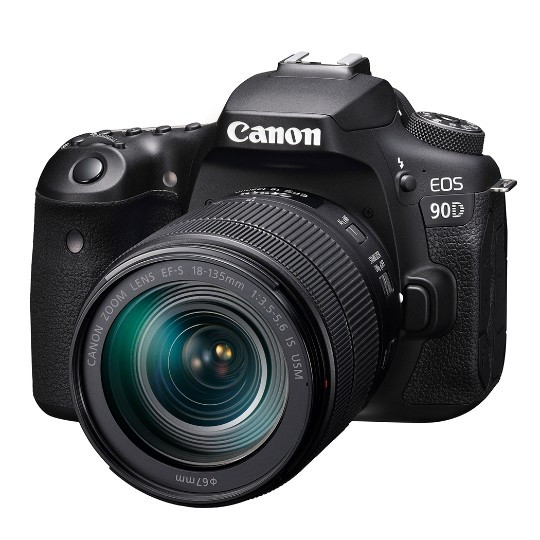 DSLRs accounted for 71% of sub full-frame interchangeable lens camera sales in the first half of 2019. In other words, while mirrorless cameras may get all the buzz and offer advantages over their DSLR cousins -- namely EVFs and edge-to-edge autofocus systems -- photographers are still buying a lot of mirrored camera bodies.

(Click on any image to see a full-resolution file!)

Steve's Digicams recently joined Canon and several other journalists to test the EOS 90D and its mirrorless sister camera, the EOS M6 Mark II, for a day at Michelin Raceway Road Atlanta. There was drifting and fancy fast cars. Full disclosure: they paid for our flights, meals, and accommodations, but have no say in what we are writing here.

Over this day, the 90D impressed. It's a rugged workhorse with admirable speed for stills not to mention video specs and features digital creators might find useful. But, in the year 2019, where does this camera fit? At $1,200 for the body alone, it's only $100 less than the full-frame EOS RP, $300 more expensive than the Sony a6400, and $200 more expensive than the Fujifilm X-T2. Perhaps even stranger, the 90D is $350 more expensive than the EOS M6 Mark II, which shares many of the 90D's specs & features. (Although this price gap narrows when one adds the EF/EF-S lens adapter and the EVF.) 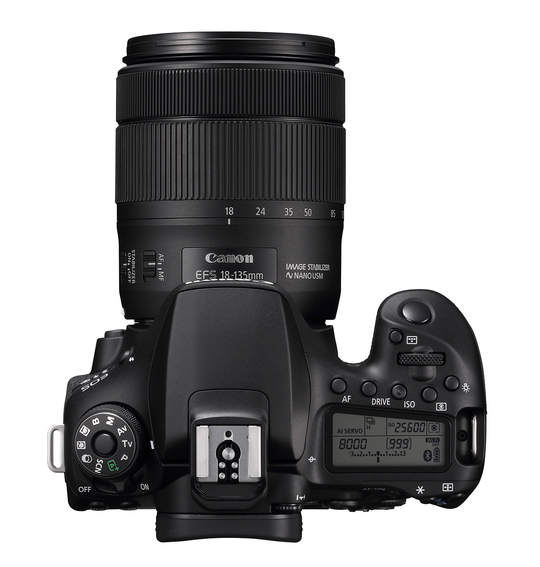 The Canon EOS 90D will be available next month (Sept 2019) in three forms:

Please note: we used full-production camera bodies and the current version of Adobe Lightroom already supports CR3 RAW files (much to my surprise). Click on any sample image below to see a full-sized version. 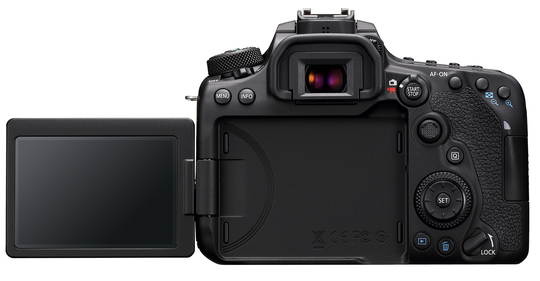 Where some mirrorless cameras feel awkward in the hand, a good old DSLR always seems right at home. They're easy to hold and feel balanced. Much like Canon's higher-end DSLRs, the EOS 90D is sizable and well-weighted, but never feels bulky or heavy. It's also dust and drip-proof, so not the greatest weatherproofing, but much more capable in weather than the M6 Mark II.

The EOS 90D features a 220,000 pixel AE sensor that generally exposes images accurately. However, in high contrast situations where you and your subject are constantly moving, you can't quite set it and forget it. During our testing, we were shooting in the bright sunlight with plenty of brilliant white clouds. However, our drift cars were often racing in front of grey pavement or dark green forests, which sometimes resulted in blown out skies and tire smoke. The simple fix was to underexpose the image by a stop so the metering system wouldn't get confused as the vehicles rotated around us into brighter areas.

In other words, it's always smart to think about how much darkness, mid-tones, and bright areas are (or will be in) a given image so you can judge and adjust your metering accordingly. That said, this is an era where an EVF comes in handy, giving you an exact preview of your exposure.

The Canon EOS 90D is a sporty camera in most scenarios. When shooting through the optical viewfinder, photographers have access to a 45-point all cross-type AF System that includes EOS iTR AF (Face Detection). And even when you're shooting with slower glass (or adding a teleconverter), it supports 27 points at F/8. The EOS 90D made shooting drift cars and high-end sports cars on a track a breeze (and I'm no expert at the low-shutter-speed techniques required to communicate motion in still photos). I found the optical system to be extremely accurate at finding and tracking moving subjects.

With Live View mode engaged, Canon's stellar Dual Pixel CMOS AF system effectively gives the camera over 5,000 AF points for stills or video recording. In servo mode, you can opt for Face + Tracking AF with Eye AutoFocus. To be clear, I didn't test this feature with the EOS 90D, but based on my experience with the EOS M6 Mark II (and a dozen other Canon cameras with this feature), it's an excellent AF system. Sony's EyeAF may be a touch better, but you can be confident in trusting Canon's Dual Pixel AF to handle almost anything you throw at it.

The one issue I experienced, using the EOS M6 Mark II, involved shooting with the 300mm F/2.8L lens; the AF wanted to focus on the foreground track rather than the approaching vehicles. It's easy to enter a different mode to counteract the issue, but it was a surprising flaw.

Overall, the EOS 90D offers excellent AutoFocus and it's one of the reasons to consider buying this body.

In a marketplace where most APS-C cameras are in the low-to-mid 20MP range, the 32.5MP EOS 90D (and M6II) boast an extra 10 megapixels of resolution while improving speed and performance over its predecessor. The result is 40+ MB 14-bit RAW files and 6-12MB Large Fine JPEG files. How are they to look at and edit in post?

Quite good, actually. Like any system, the better the glass, the better your imagery. In those terms, the kit lens is okay, but not great. Still, despite trying out a form of photography where I still have much to learn, the EOS 90D produces crispy, colorful imagery with even skin tones and accurate colors. Pushing them after the fact, I was able to raise shadows a few stops without ruining shots, the colors saturated nicely, and the noise/grain was minimal at lower ISOs. If you've ever shot with a Canon APS-C DSLR before, you'll be in familiar territory, visually, but with an extra 10 megapixels should you need them. In the case of photographing semi-distant moving cars, I found it helpful to have the extra pixels for cropping and reframing.

Another area where we have to do more testing. Almost all of my time with the EOS 90D was spent outdoors in mid-day Atlanta summer sun, so I didn't get to test high ISO settings with this camera. For demonstration purposes, here are a couple of images captured with the EOS M6 Mark II at ISO 12,800 and ISO 25,600:

In short, Canon cameras handle noise quite well and as the digital grain appears, it's reminiscent of 16mm film cameras. In certain scenarios, like night street photography, the look could be considered stylish.

I didn't shoot any video with the EOS 90D -- look for more coverage in the full review -- but I did test out a couple of features with the EOS M6 Mark II. Despite having Canon's amazing (perhaps industry-leading) Dual Pixel CMOS AF system for video shooting, which is great for running and gunning and vlogging, Canon once again limited the video features on one of their cameras. Where almost every other brand offers 4K and HD recording at 24p, Canon starts off at 30p for both resolutions (much like the EOS RP). That's right, in 2019 if you want their newest models, you need to go all the way up to a $2,000 EOS R for 24p video production even though it was previously offered in the 80D and other APS-C DSLRs. The 90D does offer 120fps slow-motion video recording, a feature the EOS R lacks, but there's no AF or sound, the slow-motion is baked into the file, and it's tucked deep into the menu system.

On the plus side, the EOS 90D includes both microphone and headphone jacks for audio recording and, in general, video quality appears to be good to strong. Still, I can't quite recommend a Canon DSLR for video recording when Sony and Fujifilm APS-C (not to mention Sony and Nikon full-frame systems) are superior.

The Canon EOS 90D features both Wi-Fi and Bluetooth. Much like previous generations, this means you can connect your camera to a smartphone or tablet and transfer images for sharing on social media. However, new to 2019, you can now pair more than one device with the camera (helpful if you have both a smartphone and a tablet) and set the camera to automatically send images to your smart device while you're shooting for instant backup.

Canon didn't want us testing this feature since we had the cameras in public before the official launch, so we'll let you know how well this all works in the coming weeks.

The EOS 90D has a few features you won't find on its sister camera, the EOS M6 Mark II. The question, I suppose, is whether or not these features are worth the extra money.

Looking over this list, and thinking back on my day with the EOS 90D, I've come away with a few conclusions. The 90D is more comfortable in my medium-sized hands, but heavier. Its shutter release feel comes from the pricier 5D series and clicks with ease. The vari-angle display is superior to the M6 Mark II's tilting screen, which bumps into the optional EVF, and the 90D's 18-135mm kit lens seems sharper than the M6II's EF-F 18-150mm kit lens. The 90D's battery life is also noticeably better when you're focused on shooting stills; I shot an entire day in burst mode, chimping as I went along, and still had full power when we wrapped up. And, the headphone jack is super important when it comes to making videos.

In truth, I found myself reaching for the 90D because it was more comfortable and more reliable, but after shooting with so many mirrorless systems, I found the 90D's lack of an EVF distracting and, per below, once again Canon has short-changed the video features.

The Canon EOS 90D is a sporty, reliable, and rugged DSLR with excellent ergonomics, strong imagery (so far, at least) and lots of resolution. Outside of its sister mirrorless model, the M6 Mark II, it's hard to find another 30MP camera at this price point with these specs. In that sense, if you're a still photographer who loves that DSLR feel, owns EF or EF-S lenses, and you're looking for a speedy upgrade, the EOS 90D is well worth a look.

However, if you're not a sports photographer, or you're more of a hybrid still/video shooter, the EOS 90D is harder to recommend. If portraits, travel, landscapes, and architecture are your thing, the EOS RP offers the benefits of full-frame (and stunning RF-mount lenses). If your passion is split between video and still images, Sony and Fujifilm boast more versatile and more affordable video APS-C cameras with equally stellar glass.

Our impressions may change over the coming weeks, but the 90D seems a bit of a hard sell in 2019 at this price point. Still, there's no arguing results, and if you're a Canon Rebel, 77D, or even an 80D shooter looking for a higher resolution replacement camera, there's a lot to love about the 90D.