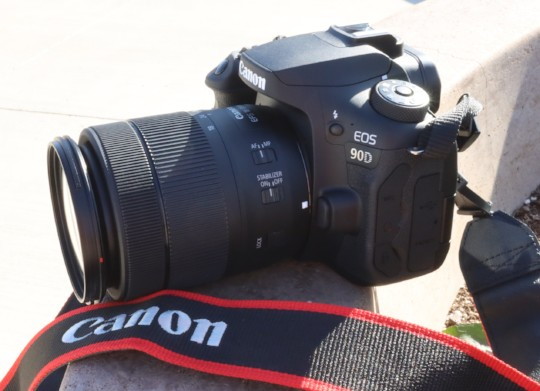 What We Love. The Canon EOS 90D excels in a variety of areas, giving you the versatility you'll want in your primary camera. With 32.5 megapixels of resolution in an APS-C sized image sensor, it breaks new ground in the intermediate level of the DSLR market. It also can record 4K video, outperforming its predecessor.

What We'd Change. It's a little disappointing that the 90D's autofocus system performs so much better in Live View mode than it does in viewfinder mode. We'd like a slightly lower introductory price point. Its performance in low light scenes is not as good as we'd like to see.

Pick This Up If... You want a versatile camera that you can use for travel, vlogging, and everything in between. If you already own an entry-level or intermediate DSLR from Canon, you'll find enough improved features in the 90D versus its predecessors to easily justify the cost of upgrading.

The Canon EOS 90D is the manufacturer's latest intermediate-level DSLR camera. And it delivers quite a few improvements over previous Canon cameras in this area of the market -- including extra resolution, excellent processing speed, and 4K video recording -- which makes it easy to recommend the 90D as an upgrade from an older Canon DSLR camera.

We especially like the versatility that the 90D provides, as it will work nicely as a travel camera, a vlogging camera, a video camera, or an everyday family camera.

For those who already own Canon DSLR cameras, the 90D uses Canon's traditional EF lens mount, so you can keep your current lenses with the 90D.

Intermediate-level photographers will love the 32.5 megapixels of resolution provided with the 90D versus its predecessors. For an APS-C sized image sensor, 32.5MP is a huge number, giving the photographer a lot of options for cropping photos while maintaining a decent number of pixels in the resized image.

However, pro-level shooters may not see much of an advantage in the extra resolution, as it doesn't seem to deliver a huge step up in image quality versus 20MP or 24MP APS-C image sensors. (To be fair, we tested the Canon 90D with a 18-135mm kit lens, which wasn't able to take full advantage of the 32.5MP sensor like a better piece of glass could.)

Then again, the Canon EOS 90D isn't really aimed at those pro-level photographers, who almost certainly are going to be seeking a DSLR with a full-frame image sensor.

Canon has made the 90D for amateur shooters, and the majority of them will appreciate what they receive from this model. They'll almost certainly feel like they're shooting with a pro-level camera, thanks to all of the great features the EOS 90D provides.

WHAT'S IN THE BOX

The Canon EOS 90D is being marketed as an upgrade to the Canon 80D, which is a few years old, and the two cameras look very similar.

The back right panel has a slightly different button layout from the 80D to the 90D, but otherwise, the bodies are almost identical. The EOS 90D has an eight-way joystick button on the back, which simplifies the process of adjusting the focus point versus the 80D.

Canon's designers did a good job with the location of the various control buttons and dials on the camera body. Canon has been making DSLR cameras for decades, and the manufacturer knows how to create a camera with excellent ergonomics and controls.

The 90D has a weather-sealed camera body, which allows photographers to feel comfortable using it in any conditions.

We really like the way the Canon 90D feels while shooting with it. This camera has a sturdy body, yet it's not excessively heavy.

The right-hand grip is just the right size to comfortably handhold the 90D in almost any photographic situation. The grip and the backside thumbpad area both have a rubbery grip that simplifies holding the camera steadily.

The buttons and dials are well placed, so you can make changes to various settings on the fly.

Whether you want to shoot with the Canon 90D's viewfinder or its LCD screen in Live View mode, you'll have excellent results. (Both the viewfinder and the LCD screen use the same hardware that was included in the Canon EOS 80D.)

The optical viewfinder is comfortable to use, featuring a cushioned eyepiece.

The LCD screen measures 3 inches diagonally and carries 1.04 million pixels of resolution. Even more impressively, it has touch capabilities, and it swivels away from the camera body for odd-angle photos or for using the camera attached to a tripod.

Unlike some intermediate or advanced cameras with a touch screen, all aspects of the camera's operation, including menus, can be operated via touch.

Additionally, Canon placed a small LCD panel on the top section of the camera. This shows the most important camera settings, which simplifies making quick changes, especially when using a low sitting tripod. We wish entry-level DSLRs would add this type of screen.

The menu system on the 90D is pretty similar to interfaces available on previous Canon DSLR cameras. You can use the Q button to open the Quick Control menu. The traditional main menus are well organized and easy to use.

The 90D does a decent job with finding the desired autofocus point quickly -- at least most of the time, as we'll explain in a minute -- so you shouldn't miss too many spontaneous photos. It contains Canon's latest image processor, the DIGIC 8, which plays a key role in the camera's operational speeds.

When using this camera in Live View mode, the AF system is especially reliable and fast, outperforming many cameras in its segment of the market. However, the 90D DSLR lags a bit behind other intermediate level DSLR cameras in its autofocus performance when using through-the-viewfinder AF.

Burst mode is one area where the 90D struggles a bit. On the positive side, it can record at speeds up to 10 frames per second in viewfinder mode and seven fps in Live View mode.

However, the 32.5MP of resolution with this camera means its images require quite a bit of storage space, so the internal buffer fills up faster than similar intermediate DSLR cameras from Canon or Nikon. The 90D's buffer can hold roughly 22-25 full-resolution RAW files in burst mode and 65-70 JPEG files before it must pause.

The metering sensor works with the autofocus array to provide face detection capabilities, another feature new to the 90D.

The Canon 90D has a dedicated metering button on the top panel, just above the LCD screen, so you can change metering modes on the fly.

The Canon 90D DSLR takes full advantage of a recent design upgrade to the APS-C sized image sensor, as it now carries 32.5 megapixels of resolution. This is one of the most impressive APS-C image sensors we've seen, as it creates solid images in nearly all shooting situations.

Versus the Canon 80D, which has 24.2 megapixels of resolution, the 90D has 34% more resolution. With such a high level of resolution, you can feel comfortable using post-processing software to crop photos shot with the 90D and still have plenty of resolution remaining.

You're able to record in JPEG, RAW, or C-RAW image formats with the 90D DSLR camera. Canon has developed the compact-RAW (or compressed-RAW) mode, which reduces the file storage required for a RAW image by up to 40%.

The camera body does not have image stabilization built into it, meaning you'll want stabilization in the lenses you choose to use.

With such a high quality image sensor, you shouldn't be surprised to receive strong ISO performance from the Canon 90D versus other intermediate-level DSLRs. The EOS 90D's native ISO range is 100 to 25,600, and an extended ISO 51,200 setting is available too.

With ISO 12,800 and 25,600, noise becomes very noticeable, causing softness in the images. They're still usable at small sizes for sharing on social media, but the dip in quality is noticeable. The extended ISO setting of 51,200 isn't really helpful.

At the upper ISO levels, the noise found with the 90D DSLR's images definitely isn't as good as you'd find with an advanced DSLR and a full-frame image sensor. Still, when compared to similarly priced DSLRs, the 90D's ISO performance is above average.

You can judge the EOS 90D's ISO performance for yourself in our sample image gallery.

Video quality is another strength of the Canon EOS 90D DSLR. It offers HD or 4K video resolution quality, which is an upgrade versus the 80D, which was limited to full HD video resolution.

The autofocus system really shines when shooting video with the 90D, as it is fast and accurate. Even when moving the zoom ring on the kit lens during our tests, the camera found the focus point almost instantly.

We were a little disappointed in the amount of wind noise the built-in microphone picked up with the 90D.

When shooting at 4K video resolution, you'll be able to use speeds up to 30 frames per second.

Certainly, the Canon 90D isn't going to create professional-level videos, but versus other cameras in its class, it performs nicely.

Because the 90D's battery life is so strong, rated at about 1,300 shots per charge, you can feel comfortable using the camera's wireless connection features regularly without draining so much battery power that you cannot continue with your photography session. Battery life in the Canon 90D is about 35% longer than with the 80D.

We were able to shoot test photos and videos for a few days before needing a recharge.

It's no coincidence that Canon has released the 90D and the mirrorless EOS M6 Mark II camera at roughly the same time. These two cameras have quite a few of the same features, including the same image sensor.

Where the M6 II is one of the best mirrorless cameras on the market, we can't say quite the same thing about the EOS 90D. This DSLR can't match full frame DSLR cameras from Canon or Nikon in terms of image quality or performance speeds. (To be fair, the 90D costs quite a bit less than full-frame cameras.)

But versus other intermediate-level DSLRs with APS-C sized image sensors, the 90D is near the top of the list. With 32.5 megapixels of resolution and excellent operational speed, this camera is well worth the purchase for someone new to DSLR photography or for someone looking to upgrade an older DSLR.

If you're more of a fan of the smaller camera body found with mirrorless ILCs, you may be better served going with the M6 Mark II. It carries a lower price point than the 90D, yet it's able to deliver similar results with video and still images.

But if you like the heft and size of a DSLR, as well as a viewfinder that's built into the camera body, we really enjoyed shooting with the 90D. It's easy to recommend this camera, even though we'd like to see its introductory price point be just a little bit lower.

It performs well for all kinds of image and video scenes, giving you outstanding versatility. No matter what kind of photography you have planned for the day, you can feel confident taking the Canon EOS 90D with you and achieving strong results.