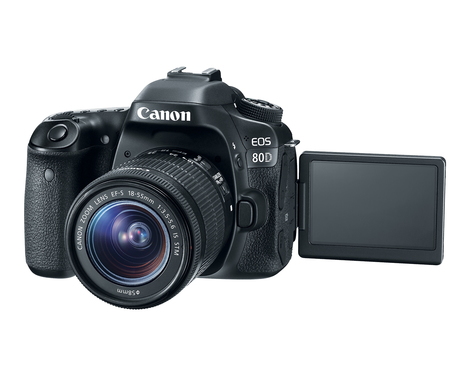 Canon's mid-level DSLR line gets updated with a new model every 2.5-3 years, and for 2016 they have added the new EOS 80D. This model replaces the popular 70D from 2013, with a host of improvements.

First off, Canon has updated the image sensor on the 80D with an all new 24.2-megapixel, APS-C CMOS image sensor. This offers an additional 4-megapixels of resolution over its predecessor, and they've mated it to their proven DIGIC 6 processor. The inclusion of the DIGIC 6 not only improves the camera's operation speed, but it also allows for an expanded ISO range, lower noise levels, and improved image quality. This new sensor uses Dual Pixel CMOS AF technology, meaning all of the effective pixels can perform imaging and phase-detection AF functions, simultaneously. Meaning, you get improved AF performance in both Still (Live View) and Video modes.

Next, they improved the 19-point AF system originally found on the 70D with an all new 45-point system on the new 80D. This new system uses all cross-type AF points, offering a wider coverage of the frame. AF tracking has also been improved thanks to the AI Servo AF II system utilizing the 80D's new 7,560 pixel RGB+IR metering sensor. This allows the camera to track more effectively by tracking your subject's color, and even skin tone.

Like the 70D, the 80D offers built-in Wi-Fi with NFC technology, a 3.0-inch touch screen Vari-angle LCD, an Intelligent Viewfinder with 100% frame coverage, and burst shooting at up to 7fps.

The Canon EOS 80D is available in the following configurations: